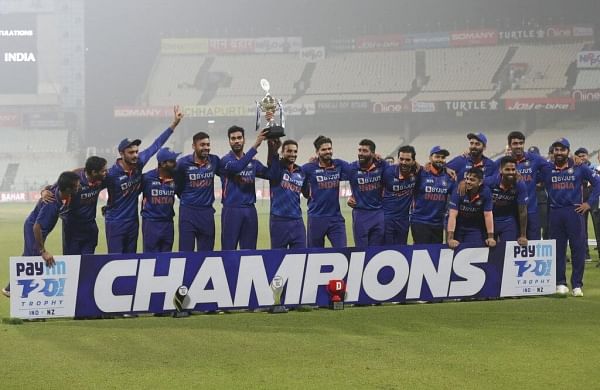 The three-match series against New Zealand was seen as a stage for new India coach Rahul Dravid and captain Rohit Sharma to kick-start their preparations for the 2022 T20 World Cup in Australia.

As international cricket returned to COVID-ravaged India after six long months, the series also saw the likes of Ruturaj Gaikwad, Venkatesh Iyer, Avesh Khan and Harshal Patel being named in the 15-member squad due to their superb IPL shows.

While the Dravid-Rohit duo talked about drawing up a different template for T20s, the focus was equally on beating the Kiwis, who have been a thorn in India’s flesh in the last few ICC tournaments, outplaying them in the group stages of the recently concluded World T20.

The team management rejigged the spin department and attempted to address questions around their death bowling, besides hunting for a back-up for Hardik Pandya. While a 3-0 win brought a feel good factor to the dressing room before the tough South Africa and England tours, the preparations for the next World T20 also got a solid boost with the experimentation showing positive results.

Serene Rohit at the top: Maintaining perfect balance between calm and storm

The newly-appointed India skipper stood tall above the rest (159 runs in three innings at an average of 53 and strike rate of 154.36).

At Jaipur, with opening and third wicket partnerships of 50 and 59 with KL Rahul and Surya Kumar Yadav, Rohit played a pivotal role in India’s 165-run chase. Even while anchoring the innings, Rohit didn’t forsake his attacking game as his knock of 48 runs took just 36 balls.

Chasing 154 at Ranchi, India’s response slowed down between the sixth to ninth overs as the duo of Ish Sodhi and Mitchell Santner were dominating the proceedings. Despite hitting occasional boundaries, Rohit and Rahul had to depend on rotating the strike to keep the innings ticking.

Rohit, instead of going after the opposition spinners, decided to play the waiting game and after the ball was changed in the ninth over, he started his usual six hitting spree.

While Rahul dominated the 117-run opening partnership with a knock of 65 in 49 balls, the skipper again anchored the innings with his 36-ball 55 (with five giant sixes) and stayed there for 15.3 overs.

Despite having a different opening partner — Ishan Kishan — in the Eden rubber, Rohit’s flow hardly got disturbed as his 31-ball 56 gave India the launch pad to register a match-winning total of 184-7. He also completed the milestone of becoming the batter with most sixes in T20Is (surpassing Chris Gayle’s 105 sixes).

Axar Patel, who was replaced by Shardul Thakur in Team India’s final 15 a week before the T20 World Cup 2021, proved the selectors wrong big time.

At Jaipur and Ranchi, when the Kiwis got flying starts with the bat, Axar cramped them with his wicket-to-wicket line and length. The goal was simple — put a break on the scoring rate and force the Kiwis to take unnecessary risks.

It paid rich dividends as in both the games, after big powerplay overs, the Kiwis were left reeling in the middle overs and ended up with moderate scores of 164-6 and 153-6.

At Eden, defending 184 runs, Rohit felt the need to introduce the spinners in the powerplay before dew came into the picture.

Patel responded to the call with a different tactic. This time, he gave the ball a lot more turn, as the wicket was holding a bit. In his first two overs, he bowled ten dots and sent back Daryl Mitchell, while not allowing Mark Chapman and Glenn Phillips to open their accounts. This proved the turning point as the Kiwis eventually succumbed to a 73-run loss.

Partnering Axar, Ravichandran Ashwin once again proved his worth.

Bowling his quota of eight overs in the first two games, he took three wickets in exchange for 48 runs at an average of 14, continuing his superb comeback in international T20s after five years. His tally after the last six games in the past few weeks now reads: nine wickets in 20 overs at an economy of 5.25, without conceeding a six.

Apart from succumbing to the Ashwin-Axar magic, the Kiwis found run scoring difficult against the pacers too.

Bhuvneshwar Kumar, after a horrendous T20 World Cup in the UAE, staged a strong comeback at Jaipur with a spell of 2-24. After dislodging the stumps of New Zealand’s semi-final hero Daryl Mitchell in the very first over, he bagged another scalp at the death with Tim Seifert’s wicket.

At Ranchi, after going for plenty in the powerplay, he again put up a strong show in the final couple of overs and got the wicket of Jimmy Neesham with a wide cutter.

At Ranchi, when the visitors were 42 for no loss at the end of four overs, Guptill’s aggression got the better of him as after hitting Chahar for a six, he tried to replicate the same shot again, only to top edge the ball into Rishabh Pant’s gloves.

Harshal Patel’s transition from IPL 2021’s Purple Cap holder to Team India’s new-found death overs specialist has given a boost to Rohit and Co’s bowling blueprint for the World T20 2022.

Patel, who took 32 wickets in 15 IPL matches this season, entered the spotlight due to his unique ability to bowl slower bouncers and cutters, without making huge changes in his hand speed, while holding the ball seam up.

Despite his top notch spells in the UAE this year, he was ignored for the World T20 and a string of poor performances by Team India meant the clamour for Patel’s inclusion only got louder.

He finally got the call for national duty and the injury to Mohammed Siraj in the first game opened the doors for the allrounder.

Patel justified his selection with spells of 2-25 and 2-26 at Ranchi and Kolkata. Rohit used him as a death bowling option and the Kiwis had no answer to his variations. What made Patel’s efforts even more special was that he had to sacrifice his premier weapon — the yorker — due to the wet ball.

Keeping in mind that the 2022 World T20 will be played at Australian grounds with large boundaries, Patel’s strong show has now given rise to the possibility of him shouldering the death bowling duties with Jasprit Bumrah in the next few months.

Apart from Harshal, another surprise package of IPL 2021 was Venkatesh Iyer.

The 26-year-old Madhya Pradesh all-rounder made his IPL debut for Kolkata Knight Riders in the UAE leg, opening the batting with Shubman Gill and taking the bottom-placed franchise to the final.

While Iyer stayed back as a net bowler for the World T20, a jaded Hardik Pandya could bowl only four overs in the group stage, as the lack of a sixth bowler ended up costing Kohli and Co the semifinal spot.

Iyer was given a go against the Kiwis at home as the need for a back-up to Pandya has become one of the main priorities for Team India.

While Iyer batted in the middle order and could make only 36 runs in three matches due to the dream run of Rohit Sharma and KL Rahul, the dead rubber at Kolkata showed a glimpse of the allrounder’s bowling prowess.

He gave away only 12 runs in three overs and got the wicket of Adam Milne. While Axar Patel and Yuzvendra Chahal derailed the Kiwis’ 185-run chase in the first ten overs, Iyer backed up Harshal Patel’s efforts (2-26 in three overs) by further tightening the screws around the visitors’ batting.

“Good to see Venkatesh Iyer bowling those overs with the skills he has. I would prefer that going forward,” skipper Rohit said after the game, indicating that the allrounder will be given an extended run in the next few months.

Denial of responsibility! TechiLive.in is an automatic aggregator around the global media. All the content are available free on Internet. We have just arranged it in one platform for educational purpose only. In each content, the hyperlink to the primary source is specified. All trademarks belong to their rightful owners, all materials to their authors. If you are the owner of the content and do not want us to publish your materials on our website, please contact us by email – [email protected]. The content will be deleted within 24 hours.
Axar PatelbattingDebutsDeepak Chaharharshal patelheroicsiplKiwis
Share

Black Caps ‘realise the enormity of the challenge ahead’