Notice: amp_is_available was called incorrectly. `amp_is_available()` (or `amp_is_request()`, formerly `is_amp_endpoint()`) was called too early and so it will not work properly. WordPress is currently doing the `pre_get_posts` hook. Calling this function before the `wp` action means it will not have access to `WP_Query` and the queried object to determine if it is an AMP response, thus neither the `amp_skip_post()` filter nor the AMP enabled toggle will be considered. It appears the theme with slug `publisher` is responsible; please contact the author. Please see Debugging in WordPress for more information. (This message was added in version 2.0.0.) in /home/runcloud/webapps/techilive/wp-includes/functions.php on line 5313
 Skoda Kushaq production gets underway ahead of late June launch, deliveries begin in July- Technology News, Firstpost - TechiLive.in 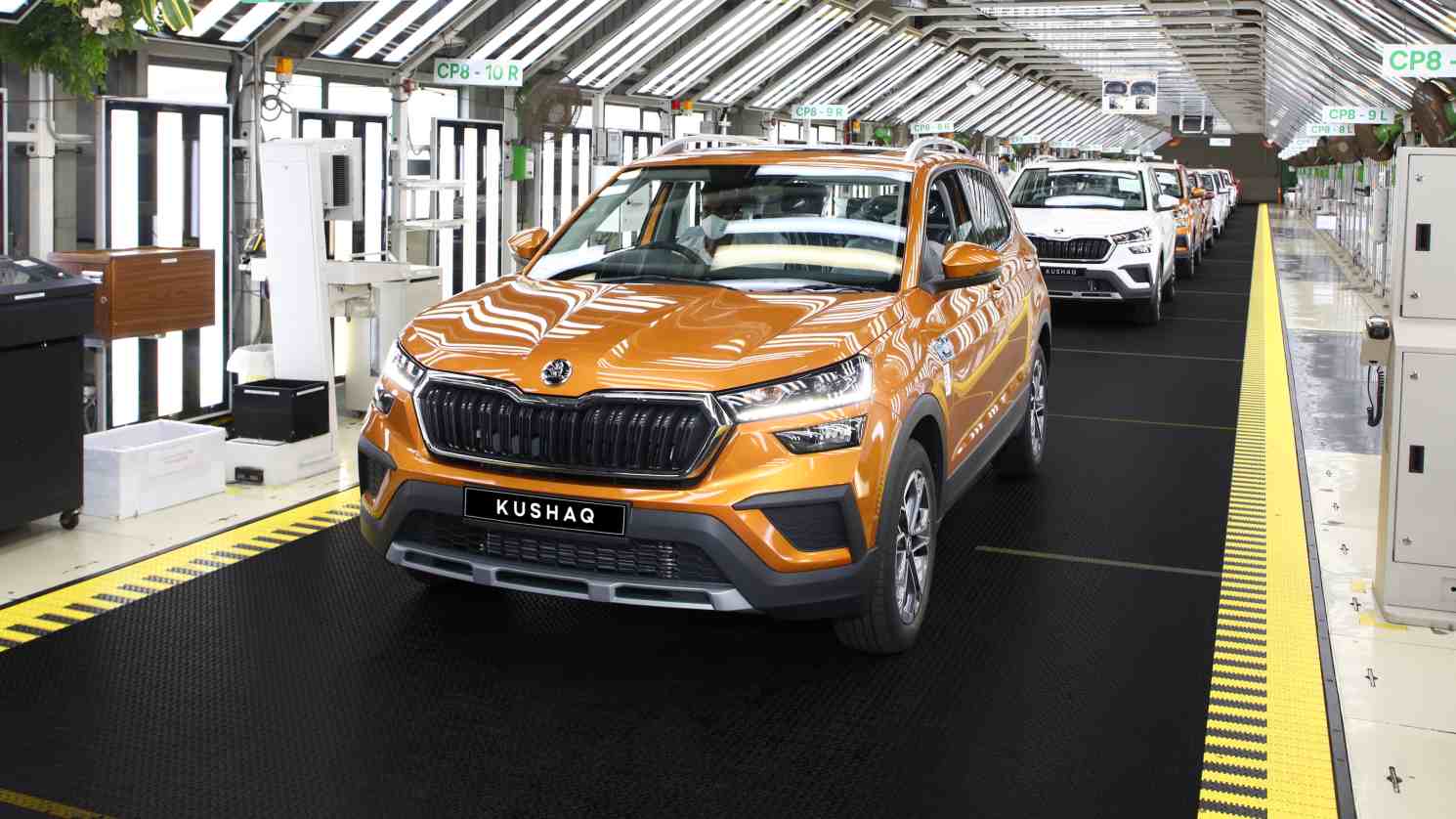 Production of the Skoda Kushaq has begun today, with the rollout of the first unit at the Skoda Auto Volkswagen India Private Limited (SAVWIPL) plant in Chakan, Pune, marking the start of the journey for Skoda’s midsize SUV. In its statement, Skoda has confirmed the Kushaq’s market launch is still on track for late June, with customer deliveries slated to commence in July. The Kushaq, being Skoda’s first offering in the burgeoning midsize SUV segment (and soon to be its most affordable model in the country), has plenty of expectations riding on its chiselled shoulders.

Speaking on the occasion of the start of Kushaq production, Zac Hollis, Brand Director – Skoda Auto India, said “With the start of production of the all new Kushaq, we are looking at a new chapter to mark the success story of Skoda Auto in India. India’s preference for SUVs has continued to grow steadily over the years. The Kushaq will offer an unparalleled driving experience and brings together all the attributes that matter to an SUV buyer. The team is gearing up for the launch later this month. We have already increased our network reach substantially and have instituted several best practices towards ensuring customer delight. With Kushaq, we are looking forward to welcoming more customers into the ŠKODA family.”

The Skoda Kushaq is set to be launched towards the end of June. Image: Skoda

It was previewed in concept form as the Vision IN at the Volkswagen Group Night in Delhi last year, and is the group’s first model to roll out under VW’s ambitious India 2.0 plan. The Kushaq heavily borrows design elements from bigger Skoda SUVs such as the Karoq and Kodiaq and has a distinctive face with split LED headlight clusters and the signature Skoda grille. Other notable design elements include crystal-effect LED tail-lights, front and rear skid plates, heavy body cladding, prominent roof rails and chunky alloy wheels.

The Kushaq is based on Volkswagen AG’s customised-for-India MQB A0 IN platform, which is designed to accommodate up to 95 percent local content and will also form the base for the Taigun, as well as Skoda and Volkswagen’s new sedans, which are due at the end of this year. The Skoda Kushaq has a wheelbase of 2,651mm, which is 41mm longer than that of the king of India’s midsize SUV space, the Hyundai Creta. Skoda has smartly used different textures for the multi-layer dashboard of the Kushaq. Image: Skoda

Taking centre stage on the dashboard is a 10-inch touchscreen infotainment system. The dashboard layout itself is somewhat similar to that of its cousin, the Volkswagen Taigun, and the centre console appears to be identical to the VW’s.

Top-spec Skoda Kushaq variants will be equipped with auto climate control, height-adjustable driver’s seat, and safety equipment will include up to six airbags, electronic stability control (ESC), hill hold control, cruise control and a tyre pressure monitor. However, the Kushaq misses out on a full-digital instruments display; something that will be available on its mechanical twin, the Taigun.

The Skoda Kushaq will come with two turbo-petrol engine options – a 1.0-litre, three-cylinder unit making 110 hp, and a 1.5-litre, three-cylinder engine putting out 150 hp. A six-speed manual will be standard for both engines, but the 1.0-litre version will also be available with a six-speed torque-convertor automatic, while the 1.5-litre model will get the option of a seven-speed dual-clutch automatic (DSG). Those looking for a diesel SUV will be disappointed, because the Kushaq will not be offered with a diesel engine option.

With over 90 percent localisation from the get-go, the Skoda Kushaq is expected to be launched at an aggressive price. Expect Skoda Kushaq prices to start at just under Rs 10 lakh (ex-showroom), which will give it the momentum it needs to battle established players in the segment such as the Hyundai Creta and the Kia Seltos.

Denial of responsibility! TechiLive.in is an automatic aggregator around the global media. All the content are available free on Internet. We have just arranged it in one platform for educational purpose only. In each content, the hyperlink to the primary source is specified. All trademarks belong to their rightful owners, all materials to their authors. If you are the owner of the content and do not want us to publish your materials on our website, please contact us by email – admin@techilive.in. The content will be deleted within 24 hours.
Loading...
aheadDeliveriesFirstpostgadget updateJulyJuneKushaqLate
0
Share