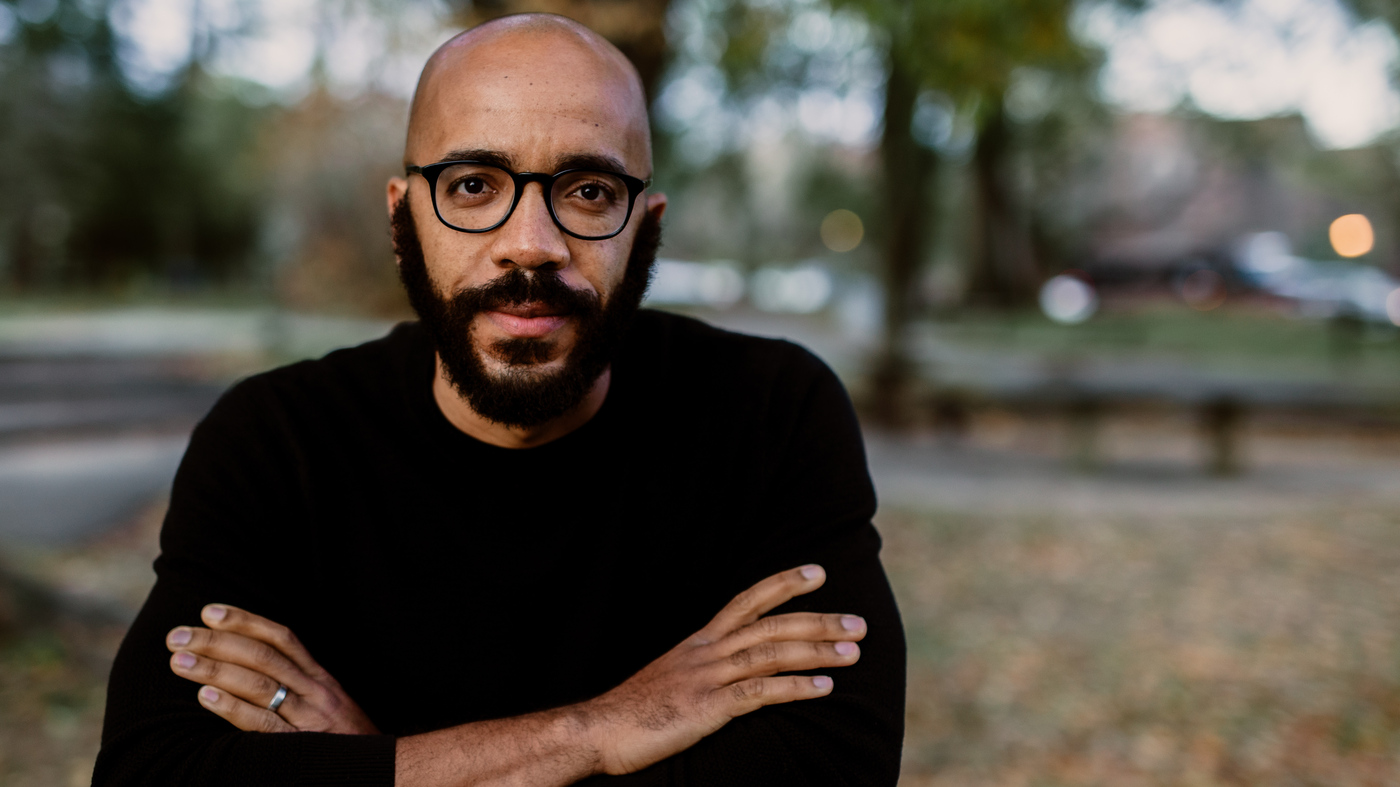 Slavery Wasn’t ‘Long Ago’: A Writer Exposes The Disconnect In How We Tell History

Clint Smith is a staff writer at The Atlantic and the author of the poetry collection Counting Descent.

Clint Smith is a staff writer at The Atlantic and the author of the poetry collection Counting Descent.

Growing up in New Orleans, Atlantic writer Clint Smith was surrounded by reminders of the Confederacy. To get to school, he traveled down Robert E. Lee Boulevard. He took Jefferson Davis Highway when he went to the grocery store.

In elementary and middle school, Smith never learned about the legacy of slavery. Instead, his class took field trips to plantations — “places that were the sites of torture and intergenerational chattel bondage,” he says, “but no one said the word ‘slavery.'”

In May 2017, after the statue of Robert E. Lee near downtown New Orleans was taken down from its 60-foot pedestal, Smith began to think more deeply about how slavery is remembered and reckoned with in America — and about all the things he wishes someone had taught him long ago.

“We are taught that the history of slavery is something that happened almost like when there were dinosaurs,” he says. But Smith notes that his grandfather’s grandfather was enslaved — and that “this history that we are told was so long ago wasn’t, in fact, that long ago at all.”

In his new book, How the Word Is Passed, Smith visits eight places central to the history of slavery in America, including Thomas Jefferson’s Monticello plantation and Louisiana’s Angola prison, which was built on the site of a former plantation. He says he wrote the book, in part, as a response to the negative messages he heard growing up in his majority Black hometown.

“We were inundated with messages that New Orleans was the murder capital of the nation … that there was a culture of violence, a culture of a pathology that was so deeply embedded in the city,” he says. “You know that the things that this country is telling you about your community and about people who look like you is wrong, but you don’t necessarily have the language or the history with which to explain it.”

How the Word Is Passed: A Reckoning with the History of Slavery Across America, by Clint Smith

Jefferson, I think, generally is such a fascinating historical figure for me, because I think he’s sort of a microcosm of America. He’s a microcosm of the dissonance and the disconnect and the contradictions of this country in the sense that America is this place that has provided unimaginable, unparalleled opportunities for millions of people across generations to build wealth and create opportunities for upward mobility and has done so at the direct expense of millions and millions of other people who have been subjugated and oppressed across generations. And the story of America is both of those things. And we have to hold both of those things at once to recognize the totality and complexity of this country.

And I think Jefferson, similarly, is the man who wrote one of the most important documents in the history of the Western world and is also someone who enslaved over 600 people over the course of his lifetime — including four of his own children. He is someone who wrote in one document that all men are created equal and wrote in another document that Black people are inferior to whites in both endowments of body and mind. … One of the reasons I wanted to go [to Monticello] for this book is that I wanted to explore how this place tells a fuller, more honest, robust story of this person so that we can have a fuller, more honest, more robust understanding of this country that he was one of the creators of.

On how tours at Monticello address the history of slavery, including Jefferson’s relationship with Sally Hemings

Monticello, I think, is a really fascinating example of a place that evolves and changes over time and responds to new information and shapes the curation of their museum experience in that way. And so one example of a new project that they’ve begun is something that started a few years ago, which is a tour that focuses on the … Hemings family. And the Hemings family was an enslaved Black family on Monticello plantation, which included Sally Hemings, who was the daughter of Elizabeth Hemings and John Wales. So her father was a white man and her mother was a mixed-race Black woman, and so she was actually a quarter Black, but was still enslaved on that plantation because of the notions of the one-drop rule and that one drop of African blood would make you Black. …

What Monticello has recognized is that they have to center [the story on] the lives of the enslaved people who lived there and not just center the story of Monticello on Jefferson, because it’s much larger than Jefferson. And in order to understand it as a plantation, we have to understand the people who lived on that plantation and made it what it was outside of the context of the single man. …

Part of what Monticello is doing, too, is trying to sort of complicate notions of the history that we’ve been taught in saying that we cannot understand what Sally Hemings’ relationship to Jefferson was as something that was fully consensual because he owned her. And that should serve as an entry point to us, thinking about the way that Black women throughout the history of slavery were treated, the way that their bodies, in so many ways, were not their own, and the ways that they were subjected to to rape and to assault and to just an onslaught of subjugation to their bodies in ways that I don’t think this country has fully accounted for.

On visiting Blandford Cemetery in Petersburg, Va., which is a cemetery for about 30,000 Confederate soldiers

This was a Sons of Confederate Veterans Memorial Day celebration. And so you had a lot of people who were reenactors who were dressed in the garb of the Confederacy, who were singing the songs of the Confederacy and who were wearing paraphernalia of the United Daughters of the Confederacy, who were wearing a vest and clothing that was sort of adorned with Confederate iconography. And the interesting part is that this is hundreds of people who are here for this event. And it felt like a family reunion, almost, that I was imposing on. And people sitting on lawn chairs and laughing and slapping each other’s backs and telling stories and kids running around playing catch around the trees. And so there was a sort of cognitive dissonance in the experience where there was so much joy and laughter and levity in a place that was honoring those who fought a war to keep my ancestors in chains, and that this event was celebrating the army that they fought that war for, that cause. It was a strange, strange experience in that way.

On interviewing his grandparents about his enslaved great-great-grandfather

One of the reasons I wanted to end the book with the interviews and conversations with my grandparents is based on a trip that I took with my grandparents to the National Museum of African American History and Culture. And we were walking through the museum, I was pushing my grandfather and his wheelchair, and my grandmother was walking a little bit in front of us, and I had this moment where I was walking through this museum and I realized that so much of the violence and history that was documented in this museum was something that they had experienced firsthand.

My grandfather, born in 1930 Jim Crow apartheid Mississippi. My grandmother, born in 1939 Jim Crow apartheid Florida. This history — the history that we are made to feel happened in the Jurassic Age almost — is something that they lived through. And when I spoke to my grandmother, she had this refrain, when I asked her about our trip to the museum, she was just like, “I lived it. I lived it. I lived it.” Like, she was looking around and realizing that so much of what she was seeing, she lived through it and experienced it directly. And I had spent these years working on this book, interviewing strangers and going into the archives and thinking about primary source documents and asking people I just met their life story and what their relationship to the history of slavery was — and I realized I had never been as intentional in doing so with my own family. And so I sat down and had this series of conversations with my grandparents and just learned so much about them and their history and their own lineage, which is my own in ways that I never would have known otherwise.

On the reality that slavery wasn’t that long ago

There are people still alive today who loved who were raised by, who knew, who were in community with people who had been born into chattel slavery. And I think when you realize our proximity to that, you gain a different understanding of how the idea that what our society and what our country looks like today would not be impacted by that is both morally and intellectually disingenuous.

The woman [Ruth Odom Bonner] who opened the National Museum of African American History and Culture alongside the Obama family in 2016, who rang the bell to sort of signal the opening of this museum, was the daughter of an enslaved person — not the granddaughter, not the great-great-granddaughter, but the daughter of someone who had been born and into slavery. And this is in 2016. And so it’s a reminder that there are people still alive today who loved, who were raised by, who knew, who were in community with people who had been born into chattel slavery. And I think when you realize our proximity to that, you gain a different understanding of how the idea that what our society and what our country looks like today would not be impacted by that is both morally and intellectually disingenuous.

Sam Briger and Thea Chaloner produced and edited the audio of this interview. Bridget Bentz, Molly Seavy-Nesper and Meghan Sullivan adapted it for the web.

Loading...
Denial of responsibility! TechiLive.in is an automatic aggregator around the global media. All the content are available free on Internet. We have just arranged it in one platform for educational purpose only. In each content, the hyperlink to the primary source is specified. All trademarks belong to their rightful owners, all materials to their authors. If you are the owner of the content and do not want us to publish your materials on our website, please contact us by email – [email protected]. The content will be deleted within 24 hours.
Disconnectentertainment newsEntertainment updateExposeshistorylongnews updateSlavery
0
Share

Bauchner Out as JAMA Editor-in-Chief