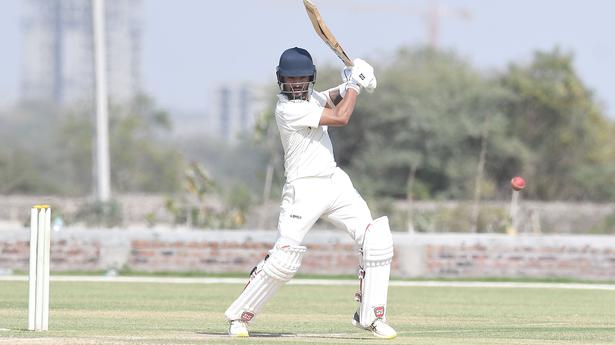 It was that kind of day at the Saurashtra Cricket Ground (C). The kind of day when the batters are more than content to tell themselves “well left” to most balls of an over and wait patiently for the next run, no matter how long it took.

Dubey’s patience lasted the whole day. And he will be back on Friday morning to renew his torment of the Kerala bowlers.

His unbeaten 105 (264b, 15×4) ensured that Madhya Pradesh was in the driving seat after choosing to bat first. It ended the day at 218 for two in the crucial Ranji Trophy Group A match.

Yes, the batting was painfully slow, runs coming at 2.42 runs an over, but on a surface that didn’t seem to offer much to bowlers of any kind, the first innings could become important, especially if there is no decisive result.

With Dubey looking increasingly like an immovable object, and Rajat Patidar (75 batting, 183b, 13×4), who seemed determined to emulate his partner’s strike rate, too putting a very high price on his wicket, Madhya Pradesh should be hoping to bat for most of the second day. The two have so far added 130 for the unfinished third wicket, from 342 balls.

Patidar had joined Dubey when Shubham Sharma had a rare failure here. His lowest score in the three innings before this one was 92.

Shubham was caught behind trying to glance left-arm spinner Sijomon Joseph. Eight overs before, Jalaj Saxena had provided the breakthrough after Dubey and Himanshu Mantri put on 62 for the first wicket.

Mantri (23) was superbly caught at slip by P. Rahul, as he attempted to cut Jalaj. The fielder had dropped him earlier, in fact, off seamer M.D. Nidheesh.

Dubey and Patidar gave no such opportunities, as they showed remarkable abstinence.

The day was drawing to a close when Dubey finally reached his second First-Class hundred, finally taking a single to covers off Sijomon, after playing all those dot balls.

Denial of responsibility! TechiLive.in is an automatic aggregator around the global media. All the content are available free on Internet. We have just arranged it in one platform for educational purpose only. In each content, the hyperlink to the primary source is specified. All trademarks belong to their rightful owners, all materials to their authors. If you are the owner of the content and do not want us to publish your materials on our website, please contact us by email – [email protected]. The content will be deleted within 24 hours.
Ajith KumarbowlersDubeyfrustratekeralaMadhya Pradeshnews updatepatidar
Share

Xiaomi Smart Home Days sale: Dates and discounts you can get on vacuum cleaners, air purifiers, water purifiers and more – Times of India

I think I am ready for competition: Bajrang Punia

Embracing native plants doesn’t have to be all or…

After losing the majority, can Macron strike a deal with…

Angelique Cabral: It’s a gorgeous time to be an actress; we…