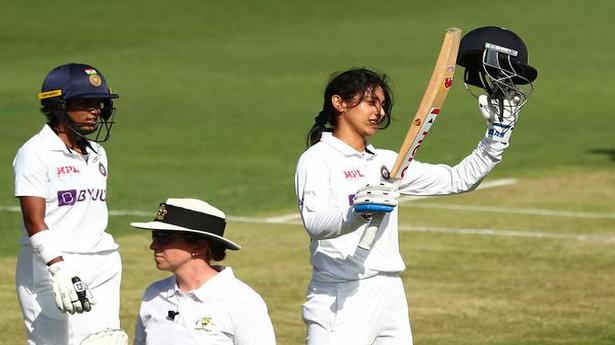 Flamboyant opener Smriti Mandhana shattered a few records en route to slamming a magnificent maiden Test century as India progressed to 231/3 in the second day’s opening session of the day/night match against Australia here on Friday.

At the dinner break, India were strongly placed, having started the proceedings at 132 for one. After Mandhana’s wicket, however, India lost wickets in quick succession and are currently at 276 runs for the loss of five wickets. Deepti Sharme (12 of 28 deliveries) and Taniya Bhatiya, who is yet to open her account, are currently at the crease as players wait for the lights to improve and play to resume.

Earlier, 25-year-old Smriti Mandhana became the first Indian woman to hit a century in day-night Tests and also the first from the country to reach three figures in the game’s traditional format on the Australian soil.

Mandhana made 127 off 216 balls with the help of 22 boundaries and a six at the Carrara Oval, and added an Indian record of 102 runs in Australia for the second wicket with Punam Raut (36), continuing the good work after putting on 93 with Shafali Verma on a rain-marred opening day.

She brought her century with a short-arm pull shot off Ellysse Perry in the 52nd over.

Mandhana wouldn’t have added to her overnight score of 80 in the second over of Day 2 but Perry overstepped. Replays showed that the catch too might have been debatable.

The India opener, however, overcame the early jitters and went about her business in a professional manner while playing some lovely shots, including a magnificent straight drive off Annabel Sutherland.

She looked set for more but was caught at short mid-off off the bowling Ash Gardner, after playing an uppish drive.

Raut walked off after a caught behind appeal despite the umpire not entertaining Alyssa Healy and Meg Lanning’s loud shouts. Mandhana’s wicket was followed by wickets of Punam Raut (36 runs), Yastika Bhatiya (19 runs) and veteran Mithali Raj, who was run out after scoring 30 runs.

Denial of responsibility! TechiLive.in is an automatic aggregator around the global media. All the content are available free on Internet. We have just arranged it in one platform for educational purpose only. In each content, the hyperlink to the primary source is specified. All trademarks belong to their rightful owners, all materials to their authors. If you are the owner of the content and do not want us to publish your materials on our website, please contact us by email – [email protected]. The content will be deleted within 24 hours.
badcricket commentarycricket updatesFallsIndiaIndia Women vs Australia Womeninterruptslatest cricket news
Share

Imagine plants singing to you in 2021. Hear it for soothing and healing effect