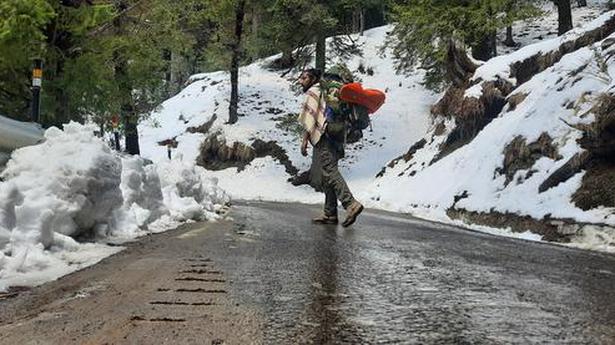 Solo traveller Yati Gaur is travelling on foot across the country

Travelling slow is as much about experiencing the destination as it is about savouring the journey, he says

Yati Gaur likes to walk. So much, that last September, he walked over 40 days and 520-odd kilometres from Rishikesh to Badrinath, via Kedarnath, Tungnath and other spots. In January this year, he walked around 800 kilometres in Rajasthan — starting from Jaipur and covering places such as Ajmer, Pushkar, Mount Abu, Jaisalmer, Barmer and Bhilwara. Right now he is walking through Himachal Pradesh.

“I am not a tourist. I want to know the people in my country,” the 23-year old explains over phone about what drives him. Meeting people, making friends, sharing stories and experiences are part of the pay-off for him.

“‘Are you a sadhu? Why are you doing this? Why don’t you hitch-hike instead?… These are questions that I have been asked. This way each day is mine, I can travel at my pace, enjoy Nature — it is about the journey, not so much the destination. It is about getting to know a place and exploration,” says Yati, who belongs to Noida, Uttar Pradesh. He says it is a forgotten way of travelling, referring to the sadhus of yore who walked on pilgrimage.

The term for travelling this way is ‘slow travel’. An offshoot of the ‘slow movement’, in it the journey becomes an immersive experience, defined by the time spent, experience with the places and engagement with the local community.

Yati, who graduated in cinema, used to work in the hospitality industry. He was a community manager with a backpacker hostel, The Hosteller. He vlogs his trips for his YouTube channel (The Unfolding Play) and also posts on his Instagram handle @theunfoldingplay.

Travelling on foot grew organically out of his fondness for walks. Lockdown presented him with the opportunity to explore it. “Walking long distances is not new to our culture. Pilgrimage meant walking from one destination to the next; Char Dham [four main pilgrimage centres of the Hindus] — Badrinath, Dwaraka, Puri and Rameshwaram — are in four directions. People walked to these. I am not doing anything new,” he says.

Walking through villages, during COVID-19, causes concern among some locals in villages he passes through. “They are concerned that I could be COVID positive. At the same time they are extremely helpful, trying to help in anyway they can since they understand that I don’t have too many resources and it is hard for me to survive since I am on foot.”

Tourist-accessible places, however, impact his travelling as there tends to be checking. “The police are concerned. I haven’t had problems since I crossed Chakrata (Uttarakhand), as it had been a COVID-free zone till Sojha (Himachal Pradesh), where I am right now. Locals do ask about vaccination and the RT-PCR test so that they can inform local authorities,” he says. Since he came in from a COVID-free zone, after spending more than two weeks there, he wasn’t asked for a test report. “However local authorities have my details in case they need to get in touch,” he says.

A typical day of walking for him starts at sunrise, and ends at sunset, with him travelling an average of 20-25 kilometres a day. Yati depends on locals for directions, “I do refer to Google Maps, but locals are better. Most of the time they know the shorter routes, which can save me 10-15 kilometres,” he says. Once he reaches his destination, he spends time exploring the area and ‘experiencing’ it.

A key to walking [as a means of travel] is travelling light. His rucksack, including a tent and sleeping bag, weighs 15-18 kilograms. He also carries water and jaggery with him, in case he cannot find food. He stays in hostels [“the last option”] occasionally or temples and ashrams. There is the inevitable, sustainability angle as well, which he speaks about on online workshops and e-learning platforms. The two important aspects are being aware of the waste one leaves behind — biodegradable and non-biodegradable and having zero carbon footprint.

“When I decide to call it a day, I ask locals if I can pitch my tent, which they allow. People are understanding, they also give food. I have made so many friends along the way,” he says. Friendly enough to call and check on him. A question he gets very often is about safety while walking alone. “I have walked in Rajasthan, Uttarakhand, Himachal Pradesh…it has been safe so far.”

Walking alone might be lonely for some, but not for Yati. “I am never alone when I am walking, I see myself as going into Nature.” While going into Nature, though he runs the risk of running into wild animals it happened to him only once when he came across a bear, “It didn’t do anything, it just moved away.”

Another such encounter in Rajasthan left him with a friend for life, a pup he calls Buttercup. He adopted her and carried her through the journey, “I just could not leave her behind, so I took her. She is not with me currently, I have left her with friends. Walking would be difficult as she is small and also it might not be safe with other animals around.”

Injuries are part of the deal, and an aspect he needs to be careful about. He injured his foot during his first long-distance walk which caused him to stop at Badrinath. This is a reason he does not push himself too much despite feeling confident about being able to do longer distances.

His dream is to travel to every part of the country on foot, get a ‘civilian award for walking’ and maybe break a few walking records.

Denial of responsibility! TechiLive.in is an automatic aggregator around the global media. All the content are available free on Internet. We have just arranged it in one platform for educational purpose only. In each content, the hyperlink to the primary source is specified. All trademarks belong to their rightful owners, all materials to their authors. If you are the owner of the content and do not want us to publish your materials on our website, please contact us by email – [email protected]. The content will be deleted within 24 hours.
Loading...
CountryfootGaurlifestyle newslifestyle updatenews updateslow travelsolo
0
Share