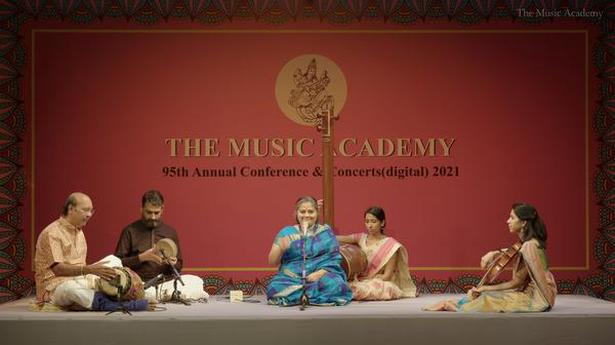 A programme list is never a sufficient indication of the quality of a concert, especially of artistes like Sowmya. The list was good, but the artistry was visible in every small aspect of presentation — alapana phrases, niraval improvisations, swara nuances, apt laya tricks, flashes of sangatis. These aspects differentiate an enlightened concert from a good one, and Sowmya was able to do this in her Music Academy concert.

The Saranga varnam, ‘Intha modi’, was just the beginning. A bright ‘Vadera deivamu manasa’ (Tyagaraja, Pantuvarali, Adi) was peppered with a micro-sangathi stream for the charanam line ‘Datru vinuthudai’, and engaging swara patterns at ‘Pradyota’ chosen for its awkward and, therefore, more challenging place in the talam. No placid swara singing in Sowmya’s dictionary.

Charumathy Raghuraman on the violin got into the mood of the concert early on with her swara responses. The elaboration of Natabhairavi alapana was more technical than aesthetic but the descent was crafted with taste. Muthiah Bhagavatar’s ‘Nee padamula nammithi ni’ on goddess Kantimathi is not often heard. Sowmya’s niraval at ‘Gopala sodari gowri’ reinforced the many shades of the raga, which has a melakarta status but suffers from neglect. Many swarakshara uses with ‘ri’ and ‘ni’ were clever icing. Charumathy’s raga alapana was also beautiful, with an easy style and optimised kalapramanam without frenzied playing.

Two substantive kritis followed — ‘Ekambresa nayike’ (Karnataka Suddhasaveri; Dikshitar) and ‘Senthil andavan’ (Karaharapriya; Sivan). Perhaps Sowmya’s idea was to offer a rich tapestry even in the short duration. Both were rendered with aplomb; there was clarity in every sangati, one of her performance staples. The Kannada raga alapana had many tinges of elegance, chiefly around the swaras ‘ga ma da’ and some just around ‘da’. With the right emphasis and context, such uses are embellishment. Her absolute clarity in brief rapid akaras is worth a closer look from youngsters.

Charumathy’s four-minute alapana was a full sweep of all things nice about Kannada. ‘Bhajare Bhaja manasa’ by Tyagaraja (Misra Chapu) has a busy course and fitted the mood perfectly. Swaras at ‘Bhusama shantham’ had further evidence of thoughtful approach to singing, responded to very competently by both Charumathy and Neyveli Narayanan (mridangam). Swara segments have tended to become mechanical and loud and the contrast was welcome.

The percussionists get a raw deal in a short concert, having to curtail a gradual build up to their tani avartanam, but veterans Narayanan and K.V. Gopalakrishnan (kanjira) used all their skills to make it count, including multi nadais.

The emotive ‘Madhava maya manava rupa’ in Hamsanandi constituted the short tukkada phase. It is perhaps a good concept to fill a short concert of this nature with regular kritis in the middle, as Sowmya did (than the customary volley of tukkadas at the end), to give the full feeling of a concert. Charumathy’s understated presence was more than counterweighed by her immense talent across a spectrum of manodharma situations. She also has the gift of knowing just how to balance the length of playing with the aesthetic impact.

The reviewer specialises in Carnatic music.

Denial of responsibility! TechiLive.in is an automatic aggregator around the global media. All the content are available free on Internet. We have just arranged it in one platform for educational purpose only. In each content, the hyperlink to the primary source is specified. All trademarks belong to their rightful owners, all materials to their authors. If you are the owner of the content and do not want us to publish your materials on our website, please contact us by email – [email protected]. The content will be deleted within 24 hours.
‘Intha modi’Dikshitarentertainment newsEntertainment updateMusicalnews updateofferedrich
Share