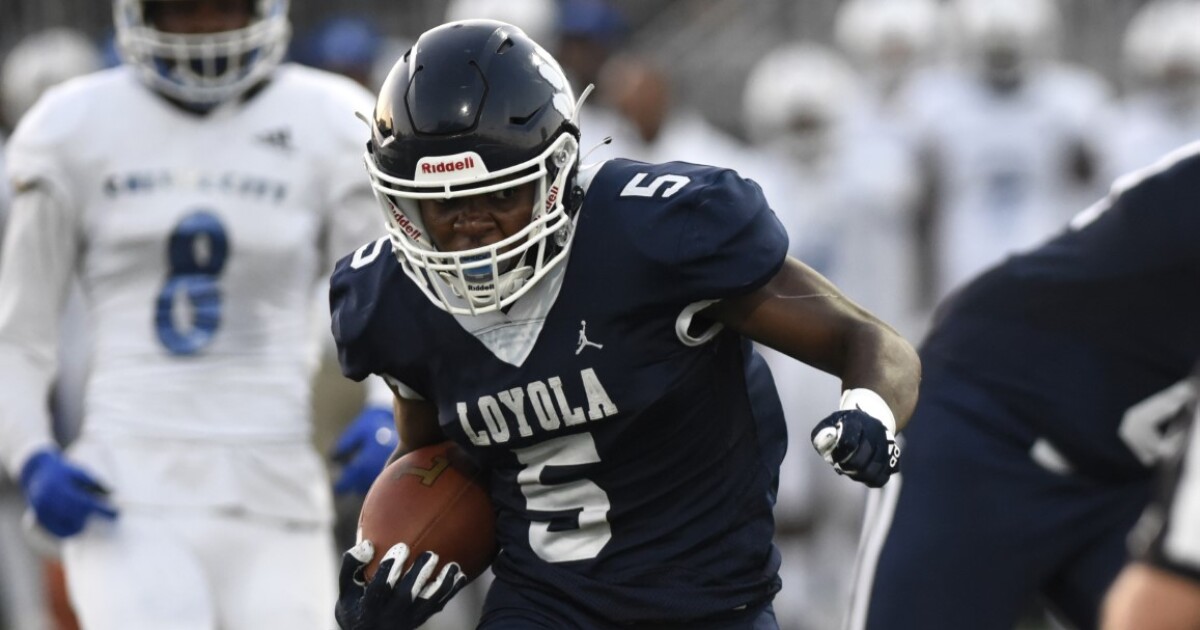 Sondheimer: Tahj Owens puts in miles on the road to succeed at Loyola

Imagine an alarm going off at 5:15 a.m. for four years since you were 13 just so you can attend a high school 45 minutes away.

“There’s once or twice I fell back to sleep,” standout running back Tahj Owens recalls about those early days commuting from Anaheim to Loyola High near downtown Los Angeles.

Now his commute is from Chino Hills, LaVar Ball territory, but there’s no going back in the Owens family. The only difference is Tahj is driving himself instead of his father, Johnnie, a Los Angeles County Sheriff’s deputy.

“Me and my family talked about it,” Tahj said. “I like to think I made the right decision.”

The truth is whether Tahj agreed or not, he was going to Loyola. His father said the family made the decision after a judge he worked for as a bailiff told him Loyola was the best option.

“I’ll say he didn’t have much of a choice,” Johnnie said. “We talked about it as a family and made the decision for him. At first he wanted to go to Mater Dei.”

At Loyola, the 16-year-old senior scored five touchdowns a week ago against Culver City while rushing for 230 yards. On Friday night against Cathedral, he had 159 yards rushing and two touchdowns. He has a 4.0 grade-point average and has flourished despite his early-morning rituals of waking up, eating a bowl of cereal, brushing his teeth, washing his face and getting into the car to make a drive whether there’s traffic or not.

He has become so good at figuring out when to leave home to avoid traffic that he could become a radio traffic reporter.

“There’s a little time span when if you leave a little later, you could end up late,” he said.

At 5 feet 11 and 195 pounds, Owens has the power, strength and quickness to be a consistent ballcarrier.

“He’s good,” coach Drew Casani said. “He has great vision, great balance and great strength. He’s our workhorse. He’s so valuable for us.”

Owens’ parents are both Los Angeles Fremont grads who grew up in South L.A. His father played football and his mother was a cheerleader. They’ve tried to make sure their son appreciates the experiences he encounters.

“He didn’t see the type of things we saw growing up, but we let him know how the world is,” his father said. “It’s a lot different for different kids that don’t have the opportunities other have and to be grateful.”

Said Owens: “They hold academics to a high standard. That’s one of the reasons I am at Loyola, always making sure I keep my grades up.”

Owens’ father ran the 400 at Fremont and continued playing football for his law enforcement team, though those days might be over.

“My wife keeps telling me to hang it up,” he said.

Father and son had some good conversations during those early-morning drives from Anaheim.

“Sometimes he would be asleep,” Johnnie said. “Other times we’d talk about life.”

Added Tahj: “He’s been a really great motivator and great example of who I want to be. Both of my parents have.”

Now, if only there wasn’t any traffic on his drives to and from Loyola. Of course, that’s not happening. The challenge is avoiding delays on the commute, something Owens is getting good at.

Loading...
Denial of responsibility! TechiLive.in is an automatic aggregator around the global media. All the content are available free on Internet. We have just arranged it in one platform for educational purpose only. In each content, the hyperlink to the primary source is specified. All trademarks belong to their rightful owners, all materials to their authors. If you are the owner of the content and do not want us to publish your materials on our website, please contact us by email – [email protected]. The content will be deleted within 24 hours.
Loyolamilesnews updateOwensputsRoadSondheimersports news
Share

The mystery of the flexible shell

Shipping Options Dry Up as Businesses Try to Rebuild From Pandemic