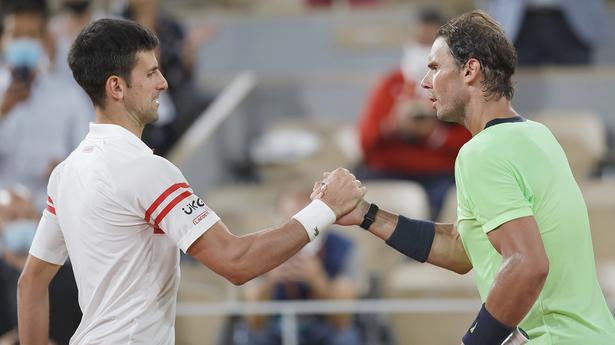 Speaking to The Hindu on the occasion of the FTF signing an agreement with Sony Sports to air the French Open live in India, Moretton said, “We expected (Novak) Djokovic to win the Australian Open, but the surprise came from Nadal on the hard courts. He knows that on clay he can claim another title to cement his status as the leader of the competition with Djokovic and Federer.”

“At the same time, Djokovic, because of the events at the beginning of the year (when he was deported from Australia), would like to probably add new titles and defend his crown,” said Moretton, a former tennis player himself.

Moretton said there would be full-capacity crowds at Roland Garros this year as pandemic restrictions had been eased and backed Nadal to be favourite once again.

He also hoped some of the upcoming players, like Stefanos Tsitsipas who lost in the final last year, young Spaniard Carlos Alcaraz and Italian Jannik Sinner, would do well and pull off a surprise.

On the women’s side, Moretton backed World No. 1 and 2020 champion Iga Swiatek, who is on a roll, as the favourite.

“Also Simona Halep is doing well with a new coach and we have our French player Alize Cornet. I will be happy to see players like Emma Raducanu and Leylah Fernandez get back to the top. What they did in the US Open last year was a fresh surprise,” said Moretton.

(Sony Sports Network is the official broadcaster for French Open).

Denial of responsibility! TechiLive.in is an automatic aggregator around the global media. All the content are available free on Internet. We have just arranged it in one platform for educational purpose only. In each content, the hyperlink to the primary source is specified. All trademarks belong to their rightful owners, all materials to their authors. If you are the owner of the content and do not want us to publish your materials on our website, please contact us by email – [email protected]. The content will be deleted within 24 hours.
airFrenchFrench OpenFrench Open Live StreamingLivenews updateNovak DjokovicOpen
Share

Overtime at work equals less exercise, unless you’re a man

Justice League, Thor, Batman, And The Biggest Week Ever For Comics? | From Panel To Podcast

I changed my shooting process for Bad Manners: Suri