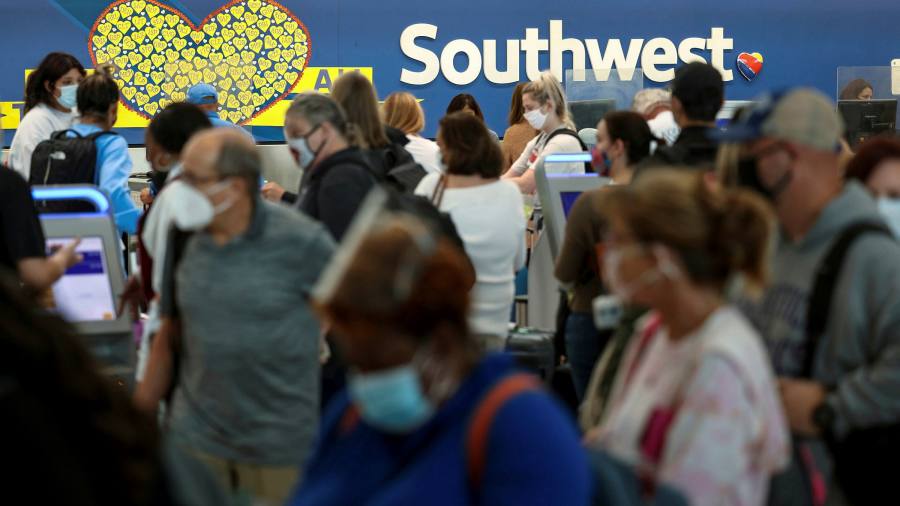 Southwest flight delays drag on into a fourth day

Southwest Airlines has blamed air traffic control and weather as widespread flight cancellations and delays stretched into a fourth day, while its pilots union said the disruptions signalled how the airline’s overtaxed operations were buckling under stress.

The disruptions were still an improvement from the weekend, when Southwest cancelled or delayed 59 per cent of flights on Saturday and 62 per cent on Sunday. American, by comparison, reported disruptions on 23 per cent of US flights.

“We could not anticipate the significant disruption that was created from unexpected [air traffic control] issues and bad weather across our Florida stations,” said Alan Kasher, Southwest’s executive vice-president of daily operations in a memo. “And as we’ve seen before, an unexpected number of delays ultimately leads to a staffing shortage.”

A number of airlines — including American, Spirit, Allegiant and, in June, Southwest itself — left flyers scrambling at various points over the summer as they tried to keep up with a post-pandemic travel rebound in the early months of the peak season.

Kasher said on Monday that the Dallas-based airline’s route schedule still had not fully recovered from capacity cuts made due to Covid-19, meaning “we still find ourselves with fewer frequencies between major airports to reroute delayed or cancelled customers”.

There were rumours online over the weekend that the cancellations and delays at Southwest stemmed from an illegal “sick-out” — when workers cite illness en masse as a way to disrupt business operations — which both the airline and union said was untrue.

Casey Murray, president of the Southwest Airlines Pilot Association, said in a memo to union members that what had been “a minor temporary event for other carriers devastated Southwest Airlines because our operation has become brittle and subject to massive failures under the slightest pressure”.

A small number of Southwest’s employees are upset over the airline’s Covid-19 vaccine mandate. Last week the union asked a federal court to block the mandate, saying it did not disagree with it but that the airline needed to negotiate over the action.

The union “has not authorised, and will not condone, any job action”, Murray said.

Denial of responsibility! TechiLive.in is an automatic aggregator around the global media. All the content are available free on Internet. We have just arranged it in one platform for educational purpose only. In each content, the hyperlink to the primary source is specified. All trademarks belong to their rightful owners, all materials to their authors. If you are the owner of the content and do not want us to publish your materials on our website, please contact us by email – [email protected]. The content will be deleted within 24 hours.
DayDelaysDragEducation newsEducation updateFlightFourthnews update
Share

Amitabh Bachchan thanks fans as he turns 79, says ‘I walk with pride of your love’