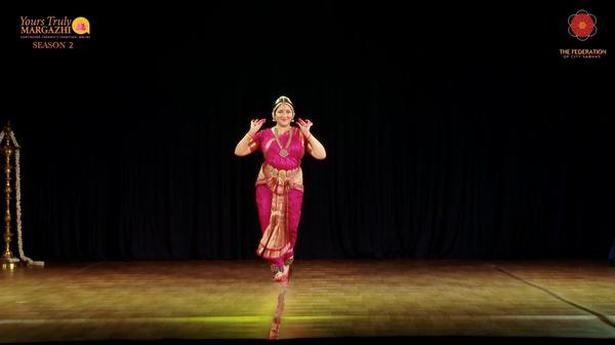 A tall brass lamp adorned with flowers, costume in the traditional arakku and orange / green colour combination, a competent musical team, and pieces rooted in classicism are some constants in the Bharatnatyam performance of Srinidhi Chidambaram.

At ‘Yours Truly Margazhi Festival, however, Srinidhi was clad in refreshing pink, and began with an invocatory jathiswaram addressed to Rama, where she interspersed the Rama Ashtakam with the jathiswaram for a serene portrayal. Graceful adavus combined with laya-suddha footwork added to the vibrancy.

Srinidhi etched out the various attributes and alankarams of the goddess in the Syama Sastri swarajathi, ‘Amba Kamakshi’, in Bhairavi. The dancer explored the sancharis of a devotee seeking the benevolence of goddess Kamakshi in a poetic manner, aligning well the choreography to suit the leisurely pace of the composition. Radha Badri enhanced the mood with her rendition.

Arunachala Kavirayar’s ‘En palli kondeerayya’ extolled the form and significance of Padmanabha reclining on a serpent bed. The abhinaya explored anecdotes related to the avatars of Vishnu, including one where the devotee asks if he is tired of performing leelas and is now resting.

The first is a folk song that visualises the conversation between a parrot and a nayika besotted by the god Muruga. The movement depicting the bird in flight and the varied expressions of a woman in love were captivatingly expressed. Srinidhi’s face was a canvas of expressions in the javali.

My constant grouse with dance performances has been the injudicious interpolation of songs. For instance, Swati Tirunal’s Dhanasri thillana ‘Gitta dhumiku takadhim’, is a vibrant, lilting composition, and interspersing the bhajan ‘Ghanashyam aayare’ into the thillana disturbed the flow of the composition.

Srinidhi’s almost permanent musical team once again rose to the occasion. Radha Badri provided vocal support, Swamimalai S.K. Suresh was on the cymbals, Nellai Kannan on the mridangam, Eshwar Ramakrishnan on the violin, and Sujit Naik on the flute.

Denial of responsibility! TechiLive.in is an automatic aggregator around the global media. All the content are available free on Internet. We have just arranged it in one platform for educational purpose only. In each content, the hyperlink to the primary source is specified. All trademarks belong to their rightful owners, all materials to their authors. If you are the owner of the content and do not want us to publish your materials on our website, please contact us by email – [email protected]. The content will be deleted within 24 hours.
BharatanatyamChidambaramentertainment newsEntertainment updateFederation of City SabhasFLAVOURgraceful adavusintact
Share

Singer R. Kelly placed on suicide watch even though…

MS Dhoni gets knee treated by Ayurvedic doctor for Rs 40…