Notice: amp_is_available was called incorrectly. `amp_is_available()` (or `amp_is_request()`, formerly `is_amp_endpoint()`) was called too early and so it will not work properly. WordPress is currently doing the `pre_get_posts` hook. Calling this function before the `wp` action means it will not have access to `WP_Query` and the queried object to determine if it is an AMP response, thus neither the `amp_skip_post()` filter nor the AMP enabled toggle will be considered. It appears the theme with slug `publisher` is responsible; please contact the author. Please see Debugging in WordPress for more information. (This message was added in version 2.0.0.) in /home/runcloud/webapps/techilive/wp-includes/functions.php on line 5313
 Stanton Continues to Surge, Leading Yankees Past Astros - TechiLive.in 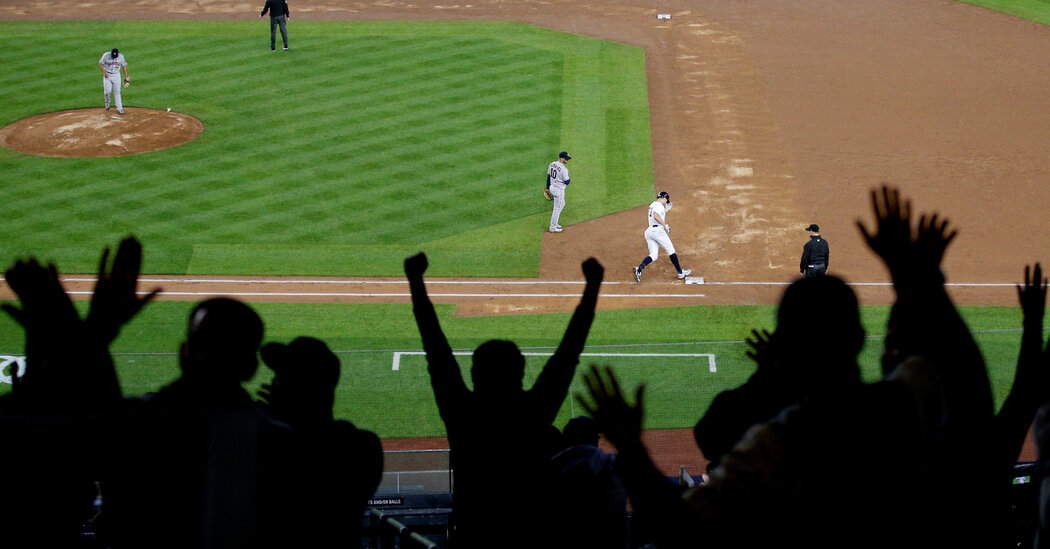 Giancarlo Stanton homered again and knocked in four runs, Aaron Hicks hit a tiebreaking single in the eighth inning and the Yankees beat the Houston Astros, 6-3, on Wednesday for their fifth straight victory.

With fans in the Bronx chanting curses at Jose Altuve and several other Astros for the second consecutive night, the Yankees (16-14) got three innings of scoreless relief from their major league-best bullpen and won for the 10th time in 13 games to move two games above .500 for the first time this season.

Yuli Gurriel and Aledmys Diaz had back-to-back R.B.I. doubles off Jordan Montgomery in a three-run fourth that gave Houston a 3-2 lead. But the Yankees rallied with two outs and none on in the fifth, and Stanton tied it when he greeted Ryne Stanek with an R.B.I. double.

The big slugger launched a long homer off rookie starter Luis Garcia in the third, extending his hitting streak to 11 games with his second two-run shot in two nights against the rival Astros. Stanton finished 3 for 4 with a walk and has 17 hits in his last six games, raising his batting average from .205 to .314.

The Yankees will try for a three-game sweep Thursday afternoon, with ace Gerrit Cole facing Houston for the first time since leaving the Astros for a $324 million, nine-year contract with the Yankees before the 2020 season.

This is Houston’s first visit to Yankee Stadium since the team’s 2017-18 illegal sign-stealing scam was exposed after the 2019 season. A crowd of 9,895 called Alex Bregman and other Astros cheaters throughout the night, but the venom and vitriol seemed to be dialed down a bit from the series opener Tuesday.

The Yankees won this one even though No. 3 hitter Aaron Judge fanned all five times up, stranding six runners. The five strikeouts matched a career worst set at Detroit on June 4, 2018.

With the score tied at 3-3, Gleyber Torres opened the eighth with a single off Brooks Raley (0-2). Pinch-hitter Clint Frazier walked and the slumping Hicks poked a flare inside the right-field line to put the Yankees ahead.

Brett Gardner hit a sacrifice fly later in the inning, and Stanton added an R.B.I. single.

Jonathan Loaisiga (3-1) pitched a hitless eighth and Aroldis Chapman struck out two in a perfect ninth for his seventh save. Of his 33 outs this season, 23 are on strikeouts.

Tomas Nido hit a two-run homer and Jonathan Villar added a solo shot and an R.B.I. single, powering the Mets over the St. Louis Cardinals, 7-2, on Wednesday night for a doubleheader split.

The loss ended a six-game winning streak for the N.L. Central-leading Cardinals (19-13).

St. Louis won the opener by 4-1 as Paul DeJong hit a two-run homer and Paul Goldschmidt had a solo homer off Marcus Stroman. Kwang Hyun Kim pitched four innings, combining with Ryan Hemsley (3-0), Giovanny Gallegos and Alex Reyes (ninth save in nine chances) on a two-hitter.

While the Mets received uplifting news earlier in the day when Manager Luis Rojas said ace Jacob deGrom could return to the rotation on Sunday, the skidding team did little at the plate in its first game after hitting coach Chili Davis was fired and replaced by Hugh Quattlebaum.

The Mets went 11 for 50 in the doubleheader and are hitting .238 with a major league-low 84 runs. They are batting .207 with runners in scoring position after going 4 for 16, including 0 for 5 in the opener.

The Mets have lost five of their last eight games and is 12-13 overall.

This was the Cardinals’ first doubleheader of the season, shortened to seven-inning games under pandemic rules. The Mets were playing in their third twin bill in just over a month.

Loading...
Denial of responsibility! TechiLive.in is an automatic aggregator around the global media. All the content are available free on Internet. We have just arranged it in one platform for educational purpose only. In each content, the hyperlink to the primary source is specified. All trademarks belong to their rightful owners, all materials to their authors. If you are the owner of the content and do not want us to publish your materials on our website, please contact us by email – admin@techilive.in. The content will be deleted within 24 hours.
AstroscontinuesLeadingnews updatesports newssports updateStantonsurge
0
Share

From Best Friends to Platonic Spouses