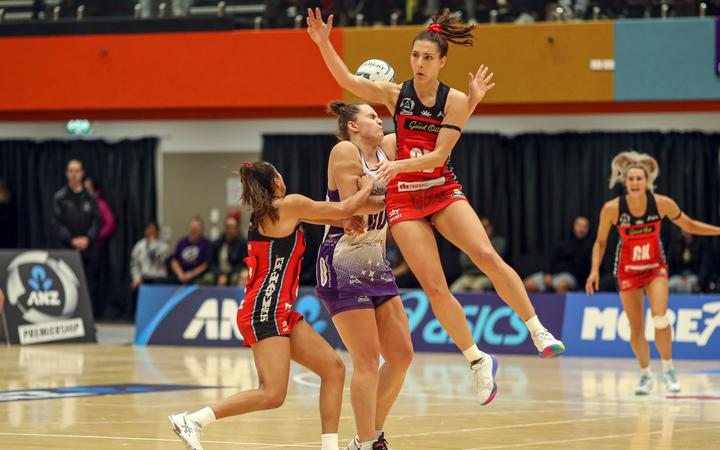 The Stars regained their winning form, but needed extra time to beat the Tactix 57-56 in their ANZ netball Premiership game in Auckland.

The Tactix, who look stronger with each round, had the upperhand over the Stars for most of the match, at times leading by eight.

But the Premiership leaders found their groove again in the second half, forcing the match into six minutes of extra time when the game was locked at 51-all, and have now established a three-point lead at the top of the league table after seven rounds.

It was also a welcome return of shooting form for Stars goal shoot Maia Wilson, who went to see her old school shooting coach Te Aroha Keenan mid-week, and sunk 95 percent of her attempts – 38 from 40 – to be named MVP.

The Tactix began the match as they intended to continue, putting massive pressure on the Stars’ attack. Leaving very few options for the Stars to thread the ball through to their shooters, the Tactix grabbed an early three-goal advantage.

Tactix circle defenders Jane Watson and Karin Burger were especially destructive to the Stars’ game plan, but as they attempted to shut down Wilson, goal attack Jamie Hume again stepped up to the mark.

Watson went hunting for the ball, and had to leave the court with a bleeding knee, but was soon back to business.

The Stars applied similar pressure on the Tactix attack, but Bird – fed superbly by Samon Nathan – managed to pull in the ball and convert it.

Messy work from the Stars allowed the Tactix to take a seven-goal lead, but when Te Paea Selby-Rickit had to leave the court with her recovering ankle in pain, replaced by Hannah Glen, their rhythm changed and the Stars took advantage.

A run of four in a row going into the break had the Stars back to within four, 18-14. But the Stars’ fortunes waxed and waned in the second quarter, too.

A defensive change – Lisa Mather coming on at wing defence for Greer Sinclair – made a difference, goal keep Temu got the better of Bird a few times, and Wilson continued to shoot with improved accuracy.

But again the Tactix came back – their through-court defence suffocating, especially from Kimiora Poi and Charlotte Elley, and forcing the Stars into basic mistakes. The visitors found themselves eight goals in front.

Hume picked up a couple of impressive intercepts and the Stars were back to within four, and could have held that at halftime if they hadn’t missed two goals right before the buzzer.

The Tactix started the third quarter up 29-24, but a reinvigorated Stars returned to the court; their defence putting the Tactix shooters under increasing pressure and they clawed back to within one.

But the pendulum swung back the Tactix way in the final moments of the quarter, and they led 42-39 to give them a little bit more breathing space for the last spell.

This time the Stars dominated, scoring the first five goals of the quarter by playing patient smarter netball, and took the lead for the first time.

Under instruction to change their defensive strategy, especially around Bird, the Stars flummoxed the Tactix attack. A confident Hume found her rhythm from long to mid-range again, and the gap stretched to three.

But the Tactix were by no means out of the running, and they too showed a huge amount of patience to work the ball into Bird to snatch the lead back again with two minutes left in the match.

In a frantic finish of normal time, a tip from Temu was matched at the other end by a steal from Watson, and when Selby-Rickit couldn’t sink a long shot, it went into six minutes of extra time.

The Stars stole a march on the Tactix in the first minute, when a tip gathered in by Hume found Wilson on her own under the post, and with Gina Crampton marshalling the Stars from the midcourt, they were ahead 56-53 at the halfway mark.

Some panicked passing from both teams in the last period saw the Tactix get back within one, but it wasn’t soon enough to force the game into further time.

Loading...
Denial of responsibility! TechiLive.in is an automatic aggregator around the global media. All the content are available free on Internet. We have just arranged it in one platform for educational purpose only. In each content, the hyperlink to the primary source is specified. All trademarks belong to their rightful owners, all materials to their authors. If you are the owner of the content and do not want us to publish your materials on our website, please contact us by email – [email protected]. The content will be deleted within 24 hours.
AudioCurrent AffairsExtraNewsnews updatePIPPodcastsPublic Radio
0
Share