Notice: amp_is_available was called incorrectly. `amp_is_available()` (or `amp_is_request()`, formerly `is_amp_endpoint()`) was called too early and so it will not work properly. WordPress is currently doing the `pre_get_posts` hook. Calling this function before the `wp` action means it will not have access to `WP_Query` and the queried object to determine if it is an AMP response, thus neither the `amp_skip_post()` filter nor the AMP enabled toggle will be considered. It appears the theme with slug `publisher` is responsible; please contact the author. Please see Debugging in WordPress for more information. (This message was added in version 2.0.0.) in /home/runcloud/webapps/techilive/wp-includes/functions.php on line 5313
 Stefanos Tsitsipas stuns Nadal in five sets at Australian Open, through to semis - TechiLive.in 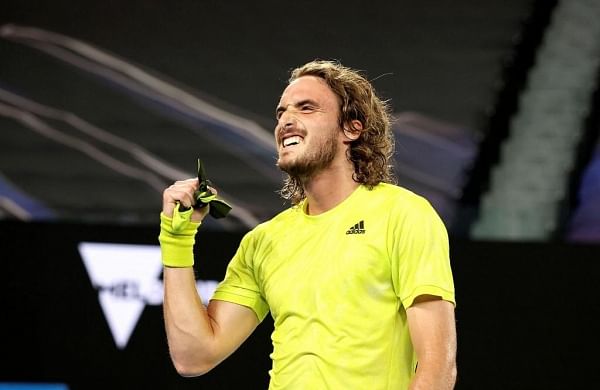 Stefanos Tsitsipas stuns Nadal in five sets at Australian Open, through to semis

MELBOURNE: For the 225th time in his illustrious career, Rafael Nadal grabbed a two-set lead in a Grand Slam match. For only the second time, he blew that big edge and lost.

A couple of uncharacteristically sloppy overheads and a framed backhand in a third-set tiebreaker began Nadal’s undoing, and his bid for a men’s-record 21st major championship eventually ended in the Australian Open quarterfinals Wednesday with 3-6, 2-6, 7-6 (4), 6-4, 7-5 loss to Stefanos Tsitsipas.

At his put-the-ball-where-he-wants-it best in the early going, Nadal went ahead rather easily, winning 27 consecutive points on his serve in one stretch and running his streak of consecutive sets won at major tournaments to 35, one shy of Roger Federer’s record for the professional era.

Nadal and Federer are currently tied at 20 Grand Slam singles titles, more than any other man in the history of tennis.

But Tsitsipas never wavered and that surprisingly poor tiebreaker by the 34-year-old Nadal – thinking too far ahead, perhaps? — helped hand over the third set and begin the epic comeback.

The only other occasion in which Nadal went from a two-set edge to a defeat in a Slam came at the 2015 U.S. Open against Fabio Fognini (who lost to Nadal in the fourth round at Melbourne Park this year).

So now, instead of Nadal attempting to continue his pursuit of Federer, it will be Tsitsipas – a 22-year-old from Greece with a flashy game – who will meet 2019 U.S. Open runner-up Daniil Medvedev in the semifinals Friday.

Neither Tsitsipas nor Medvedev has won a Grand Slam tournament.

In the other men’s semifinal, 17-time major champion and No. 1-ranked Novak Djokovic will face 114th-ranked qualifier Aslan Karatsev, who is making his Grand Slam debut.

Nadal came into this year’s first major with doubts about his back, citing that as his reason for pulling out of the ATP Cup team competition that preceded the Australian Open and saying the problem prevented him from practicing properly for about three weeks.

But he hadn’t ceded a set at Melbourne Park through four matches; he won all 21 sets he played at last year’s French Open, where he picked up his 20th Slam trophy to pull even with Federer (Williams has 23, Margaret Court 24).

Federer hasn’t competed in more than a year after two knee operations.

With squawking seagulls providing an odd nighttime soundtrack at Rod Laver Arena — but no spectators, because they’ve been banned during a local COVID-19 lockdown, and won’t return until Thursday — Nadal always had an answer for anything Tsitsipas tried at the outset.

Rush the net? Here comes an angled passing shot. Hang out at the baseline? Good luck trying to outslug Nadal from there.

It looked like it could be a repeat of their 2019 semifinal in Australia, when Nadal overwhelmed Tsitsipas and allowed him to win just six games.

But this time, Tsitsipas came in after three full days off, because the man he was supposed to face in the fourth round, No. 9 Matteo Berrettini, withdrew with an abdominal injury.

That — and a 12-year age difference — might have contributed to Tsitsipas’ being fresher in the late going as they played beyond four hours. Tsitsipas, who’s been pegged as a future star for years, nearly pulled off this sort of shocker against Djokovic in the French Open semifinals in October, going from two sets down to forcing a fifth.

Tsitsipas couldn’t seal the deal back then.

He did against Nadal.

Tsitsipas moved out front at 6-5 in the fifth by breaking at love as Nadal flubbed a series of shots, then served out the victory by converting his third match point with a backhand winner.

Loading...
Denial of responsibility! TechiLive.in is an automatic aggregator around the global media. All the content are available free on Internet. We have just arranged it in one platform for educational purpose only. In each content, the hyperlink to the primary source is specified. All trademarks belong to their rightful owners, all materials to their authors. If you are the owner of the content and do not want us to publish your materials on our website, please contact us by email – admin@techilive.in. The content will be deleted within 24 hours.
AustralianAustralian OpenNadalnews updateOpenRafael Nadalsemissets
0
Share

Food trends for the millennials