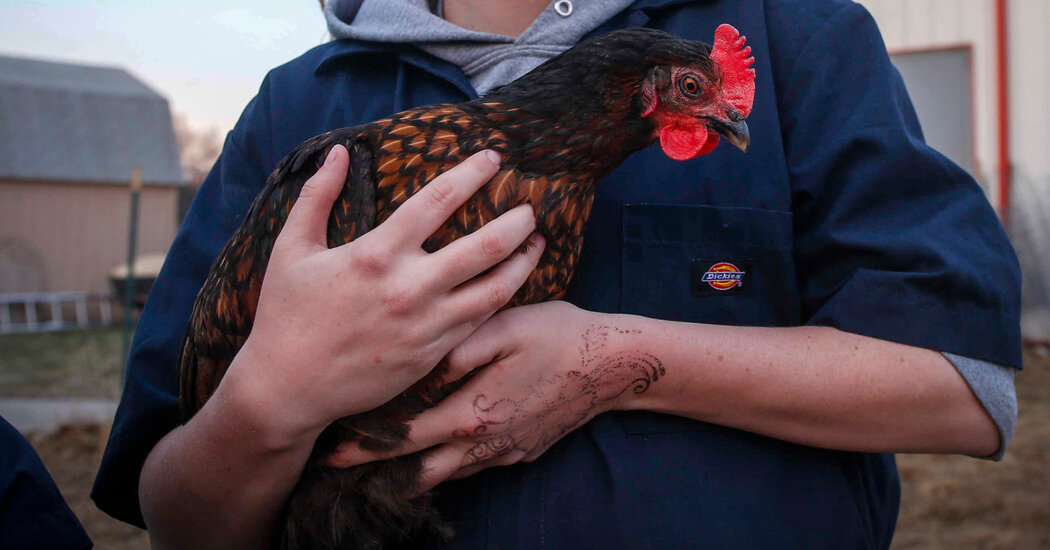 A salmonella outbreak linked to backyard poultry has prompted U.S. health officials to issue a stern warning: Don’t kiss or snuggle your ducks and chickens.

There have been 163 illnesses and 34 hospitalizations reported across 43 states, the Centers for Disease Control and Prevention said last week. North Carolina had the most reported cases, with 13, followed by Iowa, with 11. About a third of the cases were in children under 5, the agency said.

The true number of sick people is most likely higher as many recover without medical attention and are not tested for salmonella, the C.D.C. said.

The likely source of the outbreak is contact with backyard poultry, the agency said.

“Don’t kiss or snuggle the birds, as this can spread germs to your mouth and make you sick,” the agency said.

That was among the guidelines that the C.D.C. offered to people who keep poultry at home, whether they are experienced owners or building their first backyard coop. They should always wash their hands for 20 seconds after contact with birds or related supplies, the agency said, and should not allow children under 5 to touch the birds.

Emily Shoop, a poultry educator at Penn State Extension, said on Monday that raising poultry was “the fastest-growing animal-related hobby in the United States.”

The C.D.C. has routinely issued similar guidelines over the years, she said, adding that this is the time of year when hatcheries and feed stores sell chicks to people starting at-home flocks.

“They get those chickens home, they snuggle them close to their face or they kiss them, and then we see some mistakes and a salmonella outbreak,” Ms. Shoop said. “The best way to prevent that is to wash your hands after you touch chickens, their manure, their eggs or their meat.”

Animals can pick up salmonella from contaminated food, or the bacteria can live naturally in their intestines. Some can even pick up the bacteria from their mothers before they are born, according to the C.D.C.’s website.

Raising backyard poultry has become more common in recent years and some have described the process of raising chickens as an exercise of cross-species respect.

Chick sales often rise in periods of anxiety or economic stress, such as stock market downturns and presidential election years. At the start of the coronavirus pandemic in the United States, a combination of unemployment, anxious free time for those not struggling with illness, and financial instability led to people panic-buying chickens much as they did toilet paper. Many were first-time buyers.

Though their intentions may have been good, there were health consequences. By the middle of December 2020, there had been more than 1,700 salmonella infections across all 50 states, the C.D.C. said, noting that contact with backyard poultry was the likely source of the outbreaks. More than 300 people were hospitalized and one death was reported. The number of illnesses reported was higher than in any previous outbreak linked to backyard flocks, officials said.

Ms. Shoop said there was a risk with any type of livestock. “These are not house pets, and a lot of people confuse that,” she said. Poultry, she said, are typically kept outside and away from food-preparation areas.

“If you are going snuggle them close to your face or mouth, you probably ought to wash your face and brush your teeth too just to prevent any cross contamination from those birds,” she said. “Chickens aren’t dirty animals by any means, but they naturally have a lot of bacteria around their bodies.”

Loading...
Denial of responsibility! TechiLive.in is an automatic aggregator around the global media. All the content are available free on Internet. We have just arranged it in one platform for educational purpose only. In each content, the hyperlink to the primary source is specified. All trademarks belong to their rightful owners, all materials to their authors. If you are the owner of the content and do not want us to publish your materials on our website, please contact us by email – [email protected]. The content will be deleted within 24 hours.
CDCchickensHealth newsHealth updateKissingnews updateOutbreakSalmonella
0
Share