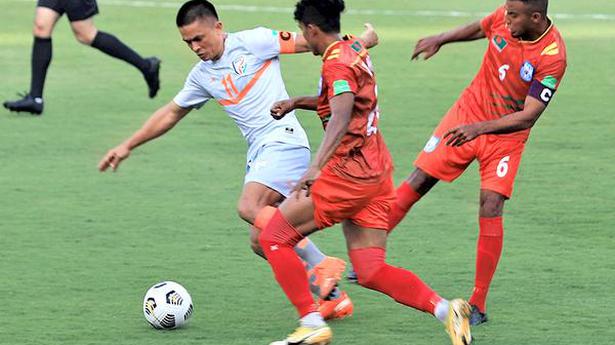 Chhetri leads Barcelona star Lionel Messi by two goals and sits a place above Ali Mabkhout of the UAE, who is third on the list with 73 strikes to his name

The 36-year-old Chhetri achieved the staggering feat with his brace against against Bangladesh in the joint preliminary qualifying round match for 2022 FIFA World Cup and 2023 AFC Asian Cup in Delhi on June 7 night.

The seasoned striker, who helped India register their first win in six years in World Cup qualifiers, now stands only behind Portugal’s Cristiano Ronaldo (103) in the active international goal-scorer list.

Chhetri leads Barcelona star Messi by two goals and sits a place above Ali Mabkhout of the UAE, who is third on the list with 73 strikes to his name.

Messi scored his 72nd international goal in a World Cup qualifier against Chile last Thursday, while Mabkhout added to his tally against Malaysia, also last week.

At the Jassim Bin Hamad Stadium on June 7, Chhetri broke the deadlock in the 79th minute when he headed in Ashique Kuruniyan’s cross from the left, and then sealed the victory by curling in a shot from long range in added time.

The India captain is also just goal away from entering world football’s all-time top-10. He is behind Hungary’s Sandor Kocsis, Japan’s Kunishige Kamamoto, and Kuwait’s Bashar Abdullah, who all have 75 goals.

Delighted with the team’s victory and Chhetri’s record, All India Football Federation (AIFF) president Praful Patel lauded the captain for leading from the front.

“Our @IndianFootball skipper Sunil Chhetri adds another feather to his illustrious cap as he overtook Lionel Messi to become the second-highest active international goalscorer with 74 goals.

“A big congratulations to Captain Fantastic & wishing him many more accolades in the future,” Patel tweeted.

The AIFF boss also praised the team on the convincing win that was built on Chhetri’s brilliance.

“Congratulations #BlueTigers on an awesome win over Bangladesh today & fabulous performance by skipper @chetrisunil11 who lead from the front & paved the path to victory.

“Your hard work & determination was visible on the field. Wishing you all the very best in the upcoming game!” Chhetri’s twin strikes meant India registered their first win in what was turning out to be a forgettable World Cup qualifying campaign in many years. It was also India’s first victory in World Cup qualifiers away from home in 20 years.

With the win, India rose to the third spot in Group E with six points from seven games.

India will next lock horns against Afghanistan in the qualifiers on June 15.

The side is already out of contention to qualify for World Cup 2022, but the Blue Tigers can still can make it to the Asian Cup in China.

Denial of responsibility! TechiLive.in is an automatic aggregator around the global media. All the content are available free on Internet. We have just arranged it in one platform for educational purpose only. In each content, the hyperlink to the primary source is specified. All trademarks belong to their rightful owners, all materials to their authors. If you are the owner of the content and do not want us to publish your materials on our website, please contact us by email – [email protected]. The content will be deleted within 24 hours.
2022 FIFA World Cup2023 AFC Asian Cup74 goalsAIFFAll India Football FederationAllTimeBarcelonabundesliga
0
Share