Notice: amp_is_available was called incorrectly. `amp_is_available()` (or `amp_is_request()`, formerly `is_amp_endpoint()`) was called too early and so it will not work properly. WordPress is currently doing the `pre_get_posts` hook. Calling this function before the `wp` action means it will not have access to `WP_Query` and the queried object to determine if it is an AMP response, thus neither the `amp_skip_post()` filter nor the AMP enabled toggle will be considered. It appears the theme with slug `publisher` is responsible; please contact the author. Please see Debugging in WordPress for more information. (This message was added in version 2.0.0.) in /home/runcloud/webapps/techilive/wp-includes/functions.php on line 5313
 Sunil Chhetri: There’s no comparison between Messi and me - TechiLive.in 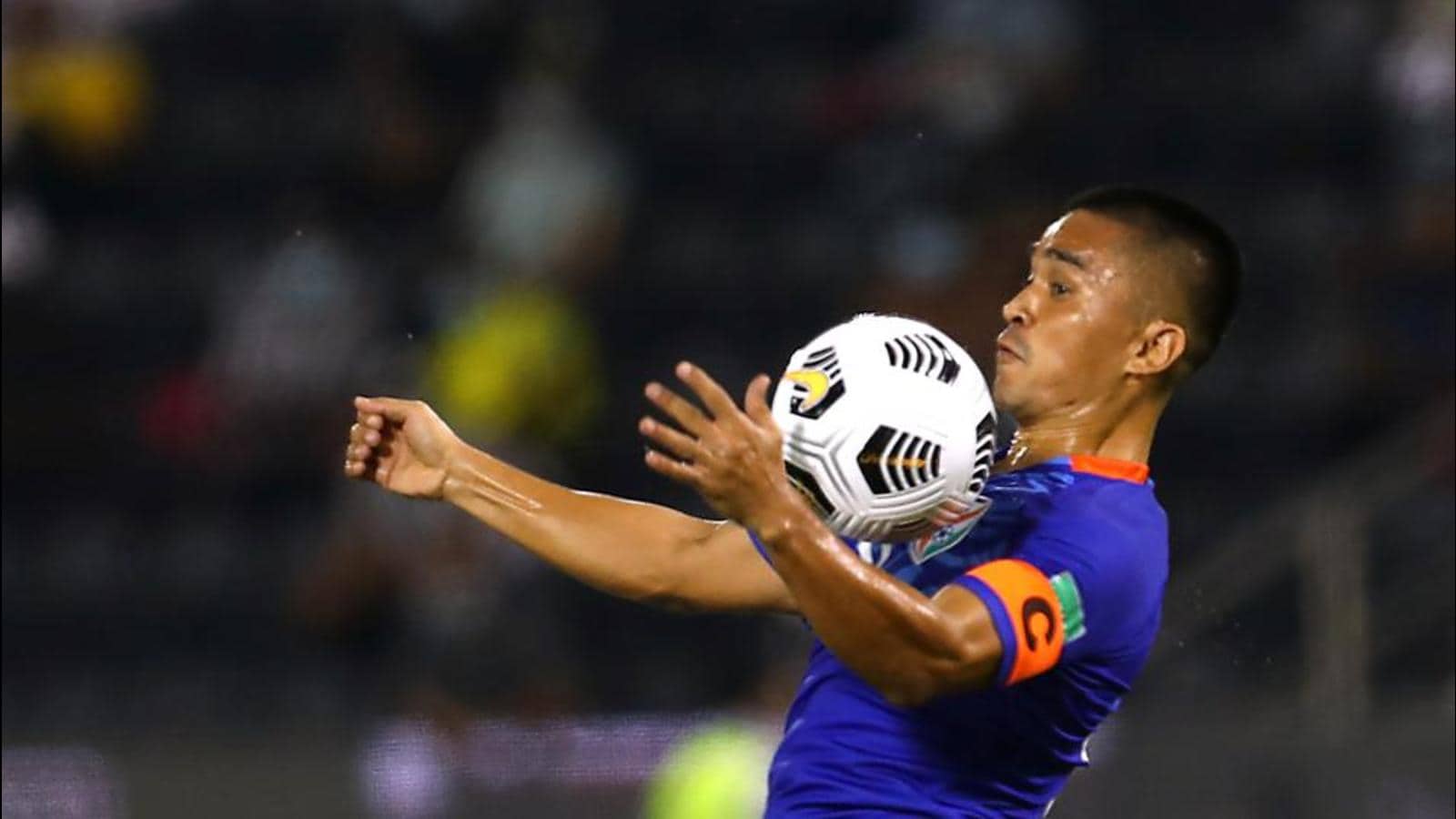 Sunil Chhetri: There’s no comparison between Messi and me

India skipper Sunil Chhetri has continued to climb in the all-time international goalscorers’ list in recent years, with his brace against Bangladesh in Doha on Monday seeing him take his tally to 74 and stand on the verge of breaking into the top 10. With those two goals, Chhetri also went past Argentina great Lionel Messi’s total of 72 international goals and became the second-highest active goalscorer in international football.

The discourse around Chhetri’s goalscoring feats for India has often been dumbed down to a comparison with Messi’s figures for the national team. Asked whether such a simplistic assessment annoyed him, Chhetri insisted that there can simply be no comparison.

“I am not annoyed by the comparison (with Messi’s scoring stats for Argentina). It is just people having an opinion. But if you want to know my take on this, it is this: there can simply be no comparison between, forget about Messi and me, but between me or any other player in that list. There are thousands of players who are better than me and those thousands of players are fans of Messi. People who understand football know that there is no comparison,” he told reporters in a virtual press conference from Doha.

“But I am proud to have had the opportunity to play more than 100 games for India and score more than 70 goals. My advice to all Indians who see that list (of highest international goalscorers) will be to be happy for five seconds. But that’s it. There is no comparison whatsoever with those players,” Chhetri added.

Less than two months short of his 37th birthday and having played senior football for two decades, Chhetri said taking better care of his body has helped him continue to play at the highest level this late into his career. “I am more knowledgeable now about my body and know how to look after it; I have never been fitter. I will continue to play till the hunger and zeal is there. That is not easy because I began in 2001-02 and now there are players in the squad who were born that year,” he said.

“I don’t have to do much. I sleep for nine-10 hours a day; I drink a lot of water. I am careful about what I eat; I don’t touch what I don’t need to eat and I always try to be a good example in training. We had a leader in Bhaichung (Bhutia) who had said that all I can do is be a good example to the others in the team,” Chhetri added.

Against Bangladesh, Chhetri had missed a free header in the second half before heading accurately in the 79th minute to give India the lead. He said that is what he was telling India head coach Igor Stimac during the celebration. “I told him, delete (from your memory) what I did to the Brandon Fernandes cross. Getting that header on target was the minimum I should have done but then I swung my head. So, apologies for the first miss,” Chhetri said. “We are quite fortunate that I can talk about it in a lighter vein now because in international games, you don’t get too many chances.”

India are currently third in Group E with six points from seven games and will secure a direct berth to the next round of the 2023 Asian Cup qualifiers if they maintain that spot after the final group game against Afghanistan on June 15. Chhetri said there were a few missed opportunities for India during this campaign. “I can’t help but think about the home game against Bangladesh and the Afghanistan away tie where we should have been better; also against Oman in Guwahati after leading for 82 minutes. We were good against Qatar in both games but I think overall, even if we win against Afghanistan we have been hot and cold in this campaign,” he said.

Asked about areas where India can improve after this World Cup qualifying campaign, Chhetri said, “We need to be a little bit brave with the ball, stitch five-six passes. We have a head coach who encourages us to keep the ball and we have players who love to have the ball. We are a young team except me, Gurpreet and Sandesh; I am hopeful that with more games, it will happen.”

Before heading to Doha, where all remaining qualifying games of Group E are being held, Chhetri was spending a lot of time trying to arrange for help for his family members who were down with Covid-19. “They are recovering at home now and that’s a massive relief,” he said after the press conference.

In the game against Qatar last week, Chhetri was substituted after the first half by Stimac in order to preserve him for the remaining two fixtures. The Bengaluru FC skipper said he wasn’t very pleased. “I was so not happy, man. The coach and I have a very transparent relationship but I don’t like being told I am not fit enough. So, when he said not many players are fit to play three games in 12 days, he most definitely wasn’t talking about me!

“You can change me if I am not good enough and I am alright with that but don’t say I can’t run enough, especially because we at BFC have been training for some time before the camp for these games. When half-time happened, he (Igor Stimac) looked straight at me and said ‘trust me on this and relax now’. I agreed because you need to be in sync with the coach.”

Denial of responsibility! TechiLive.in is an automatic aggregator around the global media. All the content are available free on Internet. We have just arranged it in one platform for educational purpose only. In each content, the hyperlink to the primary source is specified. All trademarks belong to their rightful owners, all materials to their authors. If you are the owner of the content and do not want us to publish your materials on our website, please contact us by email – admin@techilive.in. The content will be deleted within 24 hours.
Asian CupBhaichung BhutiaBrandon FernandesChhetricomparisonfootballigor stimacindian football team
0
Share