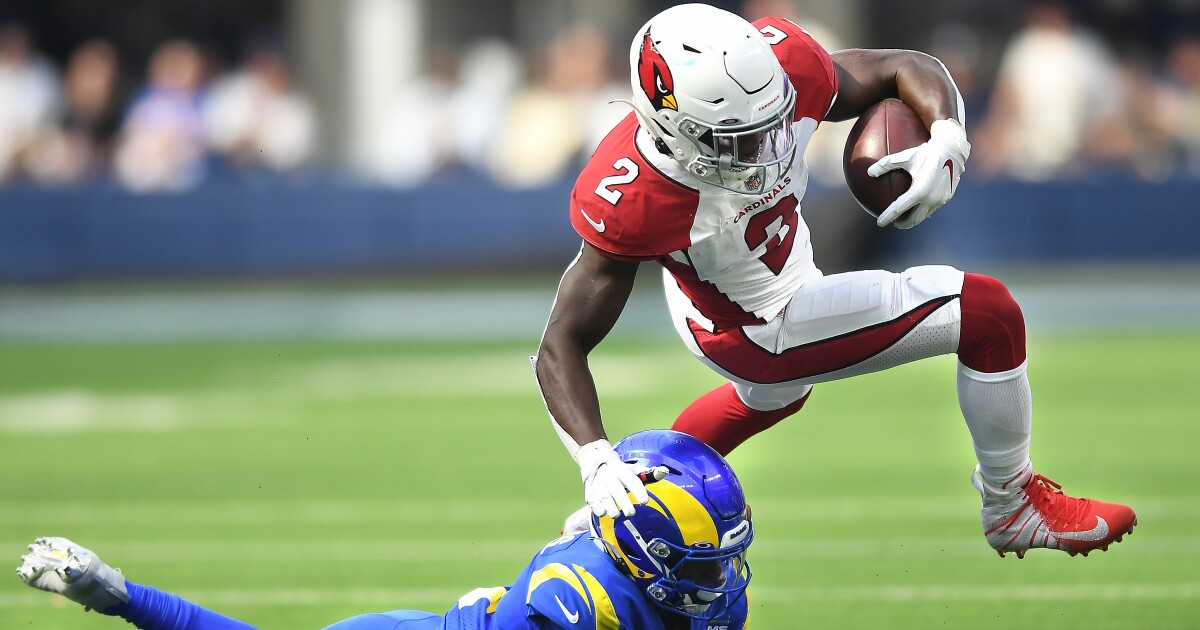 And rethink the Sean McVay coach-of-the-year chatter too.

The Rams’ grand plan for a February appearance in Super Bowl LVI in SoFi Stadium took an ugly turn Sunday in a 37-20 home loss to the Arizona Cardinals.

A week after looking the part of a Super Bowl contender by defeating Tom Brady and the defending Super Bowl champion Tampa Bay Buccaneers, the Rams suddenly are in danger of falling off the pace in the NFC West.

With 70,003 fans at SoFi Stadium looking on — and desperately pining for another chance to provide a raucous home-field advantage — the Rams disappointed and lost their division opener after three wins to start the season.

The only bright spot? They don’t have much time to mull their mess.

“The beauty of it is that you don’t have much time to feel sorry for yourself,” McVay said.

Sorry might have been the watchword for Sunday’s performance.

“That wasn’t up to our standard for sure,” cornerback Jalen Ramsey said. “So whatever it may be, whatever it’s going to take, we need to figure it out ASAP.”

In victories over the Chicago Bears, Indianapolis Colts and Buccaneers, the Rams displayed the hallmarks of a Super Bowl contender.

McVay returned to his 2017-18 wunderkind form and dialed up innovative plays. Stafford executed brilliantly when the Rams needed it most. Raheem Morris’ defense forced turnovers and made key stops.

None of that was on display against the Cardinals.

Kingsbury, Murray and an opportunistic defense anchored by J.J. Watt announced that the Cardinals (4-0, 1-0) are a legitimate threat to tilt the balance of power in the division.

McVay did not sound panicked.

“We’ve got the right guys in that locker room — we didn’t all of a sudden become a different football team,” he said.

Maybe not, but the Rams did not look the same. Or even close. They looked like a team with a We-just-beat-a-defending-Super Bowl-champion hangover.

The Rams went into the game with a chance to win four in a row for the first time since 2018, when they started the season with eight consecutive victories and parlayed that into a Super Bowl run. McVay had been 8-0 against the Cardinals. The Rams averaged 31.3 points in those victories. Their average margin was 20 points.

The No. 1 pick in the 2109 draft passed for 268 yards and two touchdowns. He rushed for 39 yards, many coming on third-down scrambles for first downs. Murray made no major errors and looked like Wilson in his prime.

“This isn’t the Super Bowl,” Murray said. “We’re not going to treat it as such.”

The Rams led, 10-7, at the end of the first quarter but were outscored 27-3 thereafter.

Stafford, positioned for one of his trademark comebacks, had his moments. He threaded a pass to receiver Cooper Kupp through three defenders. It was the kind of play that makes observers gasp in wonder.

But that pass was the exception.

The Cardinals intercepted an underthrown, first-quarter pass to DeSean Jackson. Stafford missed low in key moments. He missed high in others. He passed for 280 yards and two touchdowns but acknowledged that was far from good enough.

“This is a prove-it game — you have to go out and do it every time,” Stafford, a 13th year pro, said, adding, “I wasn’t good enough at doing that.

“I think as a team we probably weren’t good enough if you look at the whole grand scheme of things. … But the person with the biggest hand in that is probably me.”

The defense was little help. The Cardinals rushed for 216 yards. Murray was never pressured into making a bad decision.

“Just a few plays that really just killed us,” linebacker Kenny Young said. “Got us out of whack a little bit.”

The Rams have three days to right themselves. The Seahawks went on the road Sunday and defeated the San Francisco 49ers, 28-21.

Stafford said he would be prepared.

“When the quarterback in this league plays well, their team has an opportunity to win games,” he said, “and I’ll make sure that on Thursday, I’m in the right place, ready to go.”

Denial of responsibility! TechiLive.in is an automatic aggregator around the global media. All the content are available free on Internet. We have just arranged it in one platform for educational purpose only. In each content, the hyperlink to the primary source is specified. All trademarks belong to their rightful owners, all materials to their authors. If you are the owner of the content and do not want us to publish your materials on our website, please contact us by email – [email protected]. The content will be deleted within 24 hours.
BowlCardinalsContendersLossnews updateRamsshortcomingsshowcase
Share