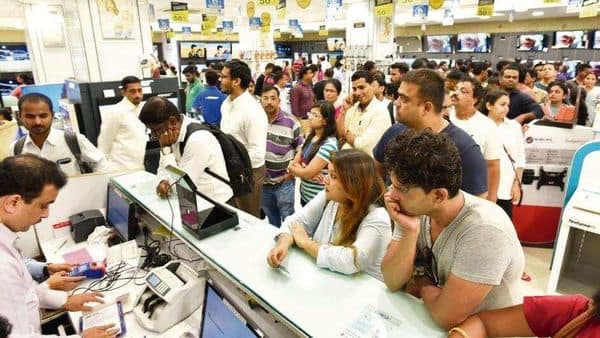 Gadget buyers putting off purchases in anticipation of festive deals and sales may be in for disappointment this year. Companies may not be generous with such offers as the ongoing chip shortage reduces stocks and the slowdown in shipping channels raises costs, said retailers and executives from mobile phone firms and analysts.

“Business has fallen drastically since 15 August,” said the head of a Mumbai-based electronics retailer. He added that while the exact reasons aren’t clear, retailers have to deal with replenishing stocks first, and now footfalls have reduced. “Initially, there was an issue with stocks, because many products from brands like Samsung and Realme weren’t available. I’m not able to figure out the reason,” he said.

Further, he pointed out that mobile phone makers typically start coming up with offers about four to five days before the Ganpati festival, which hasn’t happened this time. He said sales are down by almost 50% in the last 25 days.

“The big concern right now is that stocks won’t be there; all the brands have started saying so,” said Nilesh Gupta, director, Vijay Sales. “This year Diwali, there won’t be a problem from the demand side, but there will be a problem from the supply side,” he added, saying a shortage of stock will lead to festive promotions being muted as well.

Gupta believes the typical “bumper” sales that happen during Diwali, Dussehra etc. will likely not happen. He noted that shortages don’t apply to smartphones alone. Television panels and laptop semiconductor chips have been scarce. In addition, raw material and shipping costs have also increased for manufacturers, meaning even those who are making in India may struggle to get their inventory in line with demand. “All this is building to a supply crisis,” he said.

Many offline retailers aren’t keen on fielding promotional offers either, because they don’t want to attract the typical crowds that Diwali sales bring.

Two executives from top smartphone companies said that barring Apple, everyone else is likely to go easy on festive promotions and deals. “Normally, festive is 2-3x the sales of a normal month. People might not have that much inventory,” one of the executives, who heads a smartphone company, said.

To be sure, this doesn’t mean that supplies will vanish and that no sales are expected during the festive season.

Faisal Kawoosa, founder of market research firm techARC, noted that despite supply constraints, festive deals are a “consumer expectation”, and at least smartphone brands will try to do as much as they can.

Some retailers themselves are reportedly pooling in resources to create lucky draws, etc., around the festive season.

“E-commerce brands will also be able to give some discounts,” said one of the executives quoted above.

Denial of responsibility! TechiLive.in is an automatic aggregator around the global media. All the content are available free on Internet. We have just arranged it in one platform for educational purpose only. In each content, the hyperlink to the primary source is specified. All trademarks belong to their rightful owners, all materials to their authors. If you are the owner of the content and do not want us to publish your materials on our website, please contact us by email – [email protected]. The content will be deleted within 24 hours.
chip shortagedampene-commercefestivefestive offersfestive offers on gadgetsfestive salesgadget update
Share