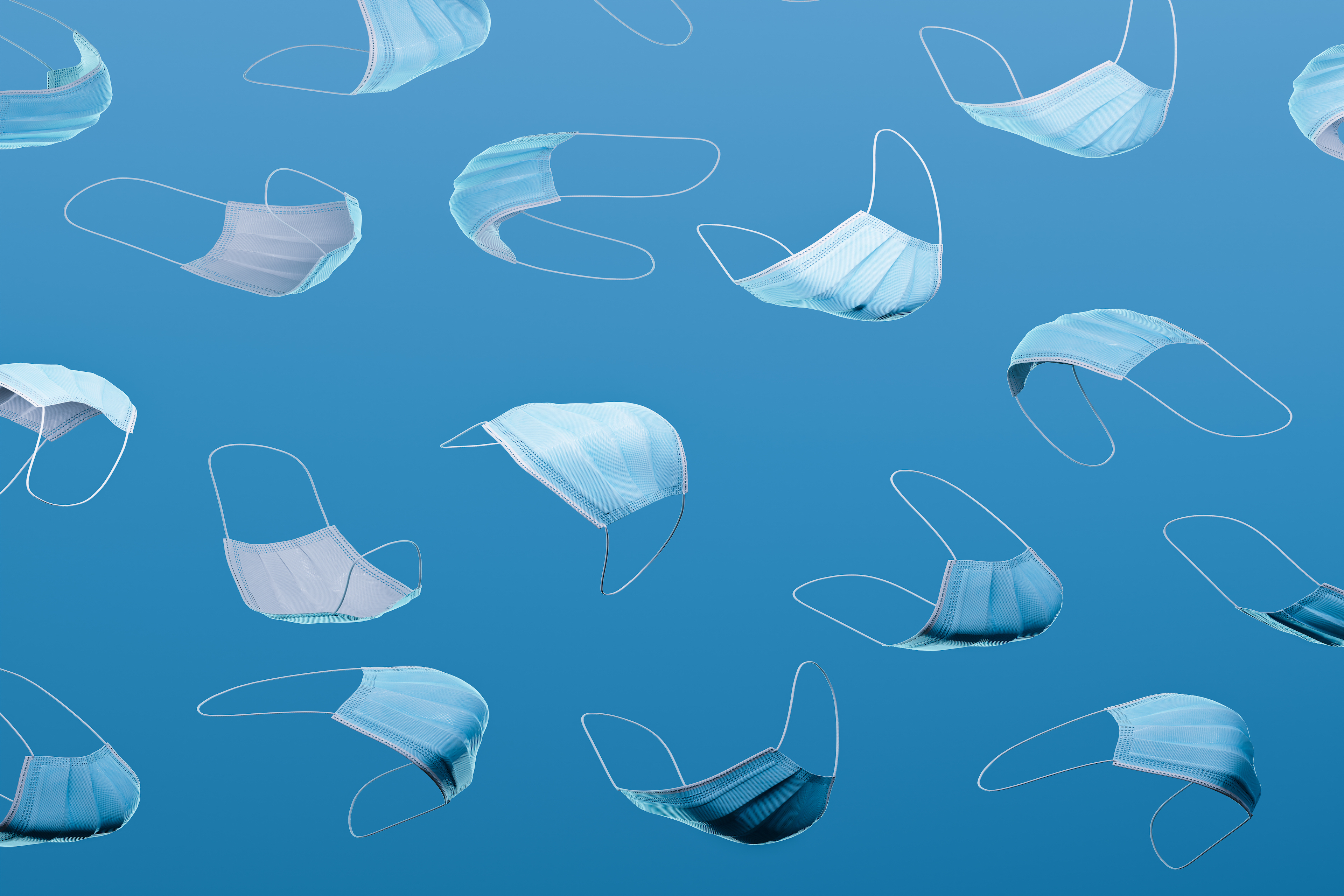 Sweeping, Limited, or No Powers at All? What’s at Stake in the Mask Mandate Appeal

The definition of “sanitation.” An old court case that involves an underwear manufacturer. Whether people had a fair chance to express their opinions about wearing masks on planes.

These disparate factors are in the spotlight as the Biden administration challenges a U.S. District Court ruling that overturned a federal mask mandate on public transportation. The outcome could determine the limits of federal public health officials’ power not only during the covid-19 crisis but also when the next pandemic hits.

Sound complicated? It is.

About the only thing that’s clear so far is that the Centers for Disease Control and Prevention’s mask requirement for people traveling on planes, trains, and buses is not likely to make a comeback anytime soon. The Department of Justice’s appeal of the Florida judge’s decision to the 11th U.S. Circuit Court of Appeals could take weeks or months.

What might that appeal contain, and why is it important? The government has not yet filed its detailed arguments, so KHN spoke with several health law experts about what to expect.

For starters, some legal pundits noted that the Justice Department didn’t immediately seek an injunction to block the judge’s decision. Could this be a strategic decision? Maybe.

Proponents of this theory point to a 1950 Supreme Court case that involved Munsingwear, a manufacturing company alleged to have overcharged consumers for its underwear during World War II when governmental price control rules were in effect. But price controls ended while the case was being appealed, and the justices said that in such cases lower-court rulings should be “vacated” — meaning the initial decision is wiped out and left with no legal force.

Maybe the White House plans to file an appeal but is hoping the case will be moot by the time it comes before the court, because the mask mandate was set to expire May 3 anyway, said Ilya Somin, a professor of law at George Mason University in Arlington, Virginia, and a critic of the mask rule. “The base of the Democratic Party likes the mask mandates, so they want to signal that they tried to fight for it.”

Other experts said they don’t think the government is slow-walking its appeal in hopes it will no longer be significant.

The Biden administration “does not want to see any court decisions like this sitting there unchallenged or even vacated,” said James Hodge, a law professor at Arizona State University. Even a vacated ruling could lead to “more judges issuing similar decisions because the reasoning was never shot down,” he said.

This creates high stakes for the government.

The appeal could set the parameters for the CDC’s authority in the next outbreak, and public health experts fear the lower court’s decision effectively closes “off future actions for a disease like this one,” said Erin Fuse Brown, a professor and the director of the Center for Law, Health & Society at Georgia State University.

Mask mandate opponents, however, say the federal government exceeded its authority in requiring collective action at the expense of personal freedom during the pandemic.

Where the appeals court will come down is not clear.

The 11th Circuit is one of the most conservative federal appeals courts in the country, with seven judges appointed by Republican presidents and four by Democrats. It sets precedent for much of the Southeast. Any ruling it makes could be appealed to the Supreme Court.

If that happened, what the justices would do is also not clear. They have ruled against some Biden administration pandemic policies. For instance, the court said the CDC did not have the power to extend an eviction moratorium to prevent the interstate spread of disease. The Biden administration also lost a challenge to a rule that set vaccinate-or-test requirements for large employers’ workers. However, the court upheld the administration’s vaccine requirement for health care workers.

“It’s not like there is a clear path that the Supreme Court would take the government’s side on this,” said Fuse Brown. “But enough people say the risk is worth taking because right now the CDC is neutered.”

Experts also pointed out that because of how the judge’s decision was developed, the dictionary could become a star witness in future proceedings.

That word is part of the Public Health Service Act of 1944. It says the surgeon general has the power to make regulations deemed necessary to prevent the spread of communicable diseases. The statute goes on to suggest several ways of doing that, including “disinfection,” “fumigation,” and, Mizelle’s focus, “sanitation.”

Mizelle’s decision said her court researched present and historical dictionary definitions of the word and selected one. Mask-wearing, Mizelle said, did not meet that narrow definition because it “cleans nothing.” (She rejected another definition, which meant to keep something clean, which might have included wearing protective masks.)

Her definition could be challenged, said Lawrence Gostin, who is a professor and directs the O’Neill Institute for National and Global Health Law at Georgetown University. “If you look at the historic meaning in 1944 and before, sanitation was for hygiene and public health,” said Gostin.

Even some critics of the mask mandate, such as Somin, said Mizelle’s definition of “sanitation” may be too narrow. It would also preclude, he noted in a blog post for Reason magazine, a hypothetical CDC ban on “defecation” on the floor of a bus or airplane, since such a ban “does not clean anything.”

Other elements of the public health statute create potential lines of argument, particularly a part saying government health officials can take “other measures” they deem necessary.

The Justice Department is likely to make the case that a mask mandate for interstate travel clearly fits into this category, said Hodge. But that would require the Biden administration to convince the court that Mizelle’s decision was a “gross misinterpretation” of statutory law.

“If they nail it on that, they could win the case straight up,” Hodge said.

Not so fast, said Somin.

The law should be read in a way “narrow enough to avoid giving the CDC power to restrict virtually any human activity that might potentially spread disease — which the Supreme Court (correctly) ruled is unacceptable” in the eviction moratorium case, he wrote in another recent blog post.

A second, very separate statute could also come into play.

One of the wonkiest elements of Mizelle’s decision is her assertion that the government failed to follow the Administrative Procedure Act, a law that spells out how the federal government is to go about creating rules, including a requirement that it generally seek comments from the public on a proposed rule for at least 30 days. The mask rule was advanced without a public comment period.

“This is the strongest argument against the government in this case,” Somin said.

The government has maintained that it had to move fast as the pandemic raged and that it is allowed a “good cause” exemption in such circumstances.

Deaths from covid in January 2021 were at record highs when the mask order was put forth, averaging more than 3,000 a day, and new variants were springing up.

Now, it all comes down to “either the CDC has the power or it doesn’t,” said Gostin. “It’s hanging like a black cloud over the CDC. They want to get a ruling.”

Denial of responsibility! TechiLive.in is an automatic aggregator around the global media. All the content are available free on Internet. We have just arranged it in one platform for educational purpose only. In each content, the hyperlink to the primary source is specified. All trademarks belong to their rightful owners, all materials to their authors. If you are the owner of the content and do not want us to publish your materials on our website, please contact us by email – [email protected]. The content will be deleted within 24 hours.
AppealHealth newsHealth updateLimitedMandatemasknews updatepowers
Share

Who says big band jazz is for old people? Not this teenage composer.

This ‘Elden Ring’ mod lets you summon your favourite NPCs…

What time does the 2022 Preakness Stakes start? What TV…

Tiger Woods plays through pain, makes another major cut at…