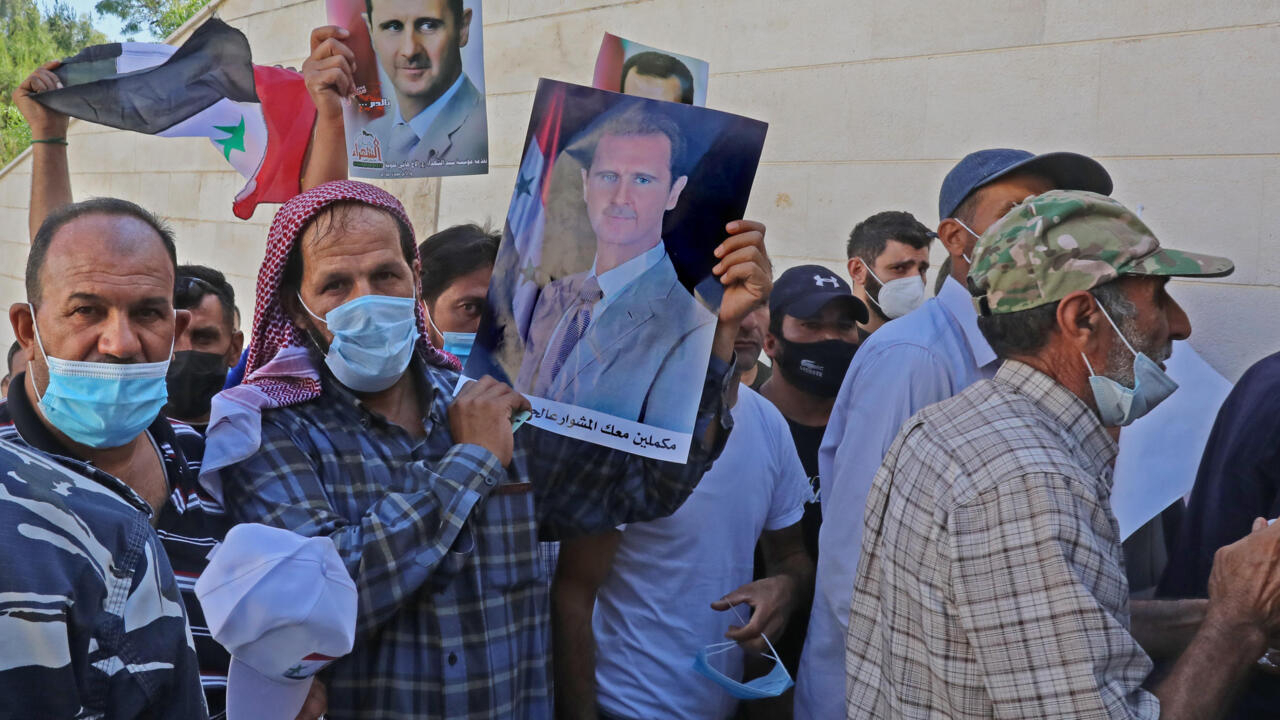 Thousands of Syrians flocked to their embassy in Lebanon Thursday, as expatriates and refugees kicked off voting for next week’s presidential election which is expected to keep Bashar al-Assad in power.

Buses packed with Syrians jammed main roads leading to the embassy in Baabda, south of Beirut, where crowds began gathering before dawn amid tight security.

Some vehicles carrying voters came under attack by groups of young men who lobbed stones or pounded passengers with their fists.

A 54-year-old Syrian man died from a heart attack aboard one of the buses, the state-run National News Agency reported, without giving details.

Polling inside Syria is set for next Wednesday.

Outside the embassy, voters chanted slogans in support of Assad and carried portraits of the longtime president and his late father Hafez, an AFP correspondent reported.

Pictures of Assad’s two little-known challengers were nowhere to be seen.

Mohammad al-Doummani, from the Damascus countryside, was among the first to vote.

“I voted for Bashar al-Assad because I believe in his project,” Doummani told AFP, after casting his ballot.

“I have full faith in him and his ability to drag Syria out of crisis”.

“I cannot find any justification for the attacks against the buses transporting the Syrians,” he told reporters.

Dozens of Syrian embassies abroad, including those in Russia, Jordan and Kuwait, also opened their doors to eligible voters, who are required to present a valid passport carrying an exit stamp from Syrian territory.

The requirement is an obstacle to millions of refugees who fled the country through unofficial channels.

Several countries that oppose Assad have blocked the vote altogether. They include Turkey and Germany, which host large Syrian refugee communities.

Damascus on Thursday criticised the German decision, calling it a “flagrant assault on the rights and freedom of the Syrians”.

The election will be the second since civil war erupted in 2011. The conflict has killed more than 388,000 people and prompted more than half of Syria’s pre-war population to flee their homes.

It will likely yield a win for Assad, who has held power for the past 21 years.

Outside the embassy in Lebanon, voters chanted: “God, Syria and Bashar”.

Abdul Rahman, a 21-year-old from the northern province of Aleppo, said he too was voting for the longtime ruler.

“He did everything for us,” said the man who has been living in Lebanon for five years.

‘Supporters of the regime’

Lebanon, which is grappling with an economic crisis, says it hosts some 1.5 million Syrians, including around one million registered as refugees with the United Nations.

The country of more than six million people has pressured refugees to return home but human rights groups still deem the country unsafe.

“The Syrians that want to vote for Assad inside Lebanon are supporters of the regime … so they should go ahead, pack their things and return to their land,” one post said.

In one video, no fewer than six men surround a vehicle and kick through its windshield while beating up passengers inside.

Denial of responsibility! TechiLive.in is an automatic aggregator around the global media. All the content are available free on Internet. We have just arranged it in one platform for educational purpose only. In each content, the hyperlink to the primary source is specified. All trademarks belong to their rightful owners, all materials to their authors. If you are the owner of the content and do not want us to publish your materials on our website, please contact us by email – [email protected]. The content will be deleted within 24 hours.
AssadBashar al-AssadearlyElectionsexpectedHealth newsHealth updateLebanon
0
Share