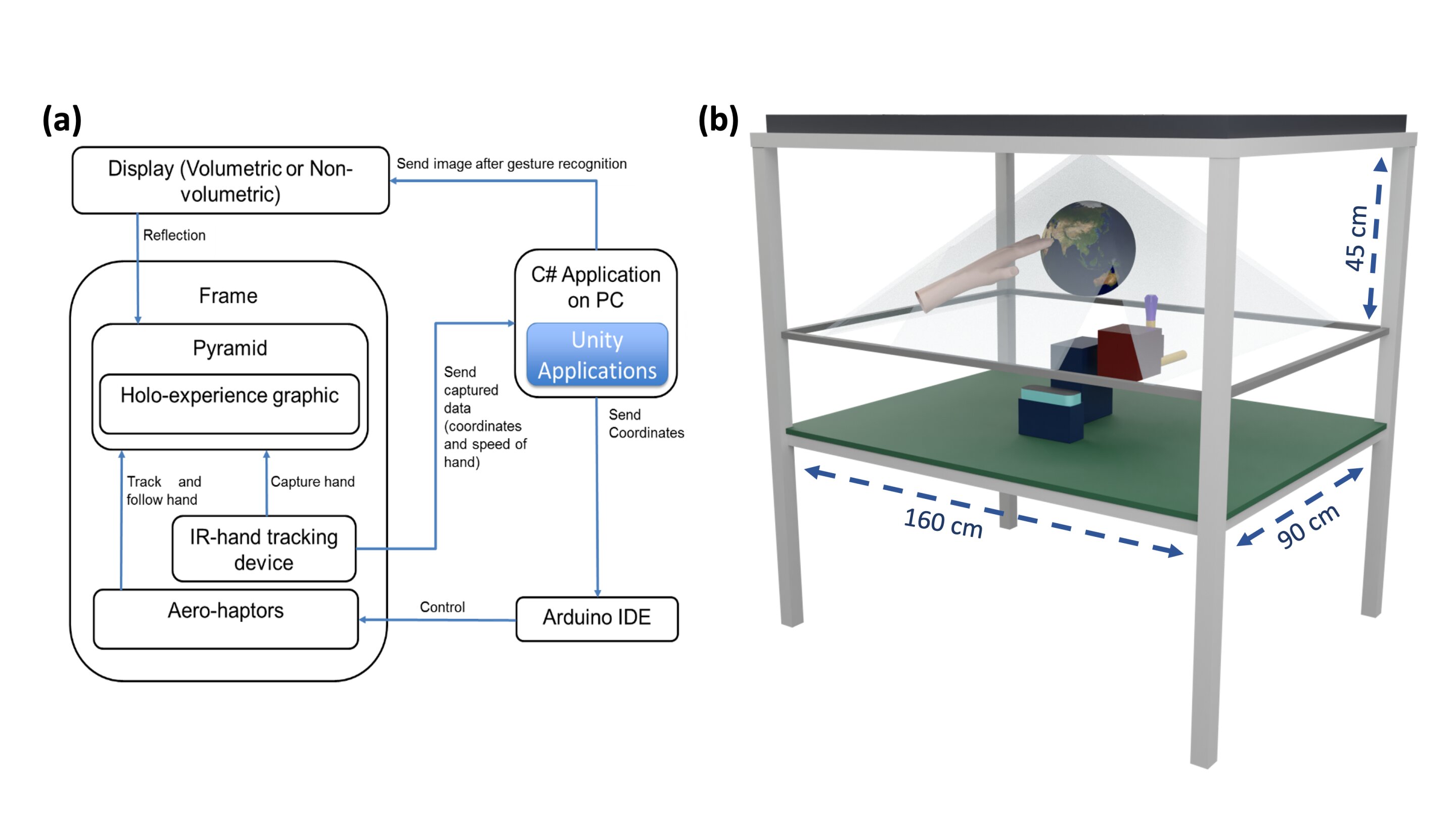 Tactile holograms are a touch of future tech

A piece of science fiction technology could be one step closer to reality with a new development in haptic holograms.

The idea of haptic, or touchable, holograms is familiar to millions from its appearance in sci-fi favorites like Star Trek’s holodeck, where characters can interact with solid-seeming computer simulations of people, objects and places.

Now, a team of engineers from the University of Glasgow have developed a new way to create the sensation of physically interacting with holographic projections.

In a new paper published in the journal Advanced Intelligent Systems, the team describe how they have developed a new technique they call ‘aerohaptics.” The system pairs volumetric display technology with precisely controlled jets of air to create the sensation of touch on users’ hands, fingers and wrists.

The technique could form the basis of new ways to interact with virtual objects, advanced forms of teleconferencing, and even empower surgeons to perform procedures remotely.

The system, developed by the University’s Bendable Electronics and Sensing Technologies (BEST) research group, is based around a pseudo-holographic display which uses glass and mirrors to make a two-dimensional image appear to hover in space—a modern variation on a 19th-century illusion technique known as Pepper’s Ghost.

It pairs a Leap Motion sensor to track users’ hand movements with a moveable air nozzle to direct airflow to their palms and fingertips.

In the paper, the team offer an example of how they used the system to create a realistic sensation of bouncing a basketball. With a computer-generated 3D image of a basketball displayed in space, and the Leap Motion sensor tracking the movement and location of the user’s hands, the system varies the direction and force of the airflow to create aerohaptic feedback.

The feedback is also modulated based on the virtual surface of the basketball, allowing users to ‘feel’ the rounded shape of the ball as it rolls from their fingertips when they bounce it and the slap in their palm when it returns. Users can even ‘push’ the virtual ball with varying force and sense the resulting change in how a hard bounce or a soft bounce feels in their palm.

Professor Ravinder Dahiya of the University of Glasgow’s James Watt School of Engineering leads the Bendable Electronics and Sensing Technologies (BEST) group, which developed the system.

Professor Dahiya said: “Haptic feedback and volumetric display technology has come a long way in recent years, bringing us closer to being able to convincingly interact with virtual objects.

“However, current haptic tech often still involves wearable or handheld peripherals, which add cost and complication and could be holding back widespread adoption of the technology.

“Aerohaptics creates a convincing sensation of physical interaction on users’ hands at a relatively low cost. We are already looking in to adding additional functionality to the system, such as adding temperature control to their airflow to deepen the sensation of interacting with hot or cool objects.

“We believe aerohaptics could form the basis for many new applications in the future, such as creating convincing, interactive 3D renderings of real people for teleconferences. It could help teach surgeons to perform tricky procedures in virtual spaces during their training, or even allow them to command robots to do the surgeries for real. We’re looking forward to exploring the possibilities as we continue to develop the system.”

Denial of responsibility! TechiLive.in is an automatic aggregator around the global media. All the content are available free on Internet. We have just arranged it in one platform for educational purpose only. In each content, the hyperlink to the primary source is specified. All trademarks belong to their rightful owners, all materials to their authors. If you are the owner of the content and do not want us to publish your materials on our website, please contact us by email – [email protected]. The content will be deleted within 24 hours.
Futuregadget updatehologramstactiletechtech newstech updatetechi live
Share