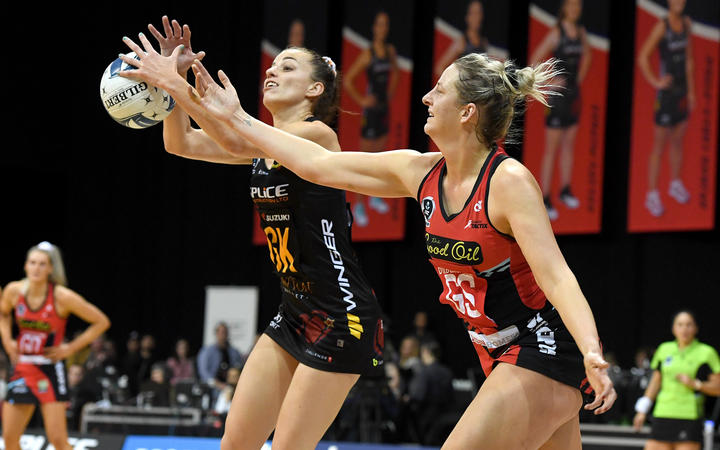 Tactix get first win of season after close battle with Magic

The Mainland Tactix have secured their first win of the ANZ Premiership season after beating a spirited Waikato Bay of Plenty Magic 63-59 in Christchurch.

It was a seesaw battle throughout but a fine shooting display from Tactix shooter Ellie Bird, who put up an incredible 54 from 55 shots, gave them the edge.

The Tactix led 19-15 after the first quarter but when the Magic brought young shooter Khiarna Williams on at goal attack, she helped lift the visitors’ performance.

Georgia Tonga also had a good impact when she replaced Temalisi Fakahokotau early at goal keep.

It was tied 33-all at half-time and for large parts of the game it was a goal for goal affair.

There was just one goal in it at three quarter time.

With six minutes to go star shooter Te Paea Selby-Rickit had to come off with cramping when the Tactix were ahead by two goals.

But Bird held her nerve and the Tactix, who were seen by many as the favourites for this year’s title, got a much needed first win.

Tactix centre Kimiora Poi was busy all night and picked up the MVP award.

Earlier, the Auckland based Stars remain unbeaten after four rounds of netball’s ANZ Premiership after beating the Southern Steel 59-45 at home.

The Stars won every quarter and led 32-23 at half-time.

Steel shooter George Fisher shot 34 from 37 at 92 percent but the Stars had far superior shooting volume and it was their highest score of the season.

Stars defender Elle Temu picked up the MVP after finishing with 5 deflections and three intercepts.

Denial of responsibility! TechiLive.in is an automatic aggregator around the global media. All the content are available free on Internet. We have just arranged it in one platform for educational purpose only. In each content, the hyperlink to the primary source is specified. All trademarks belong to their rightful owners, all materials to their authors. If you are the owner of the content and do not want us to publish your materials on our website, please contact us by email – [email protected]. The content will be deleted within 24 hours.
AudiobattleCloseCurrent AffairsMagicNewsnews updatePodcasts
0
Share