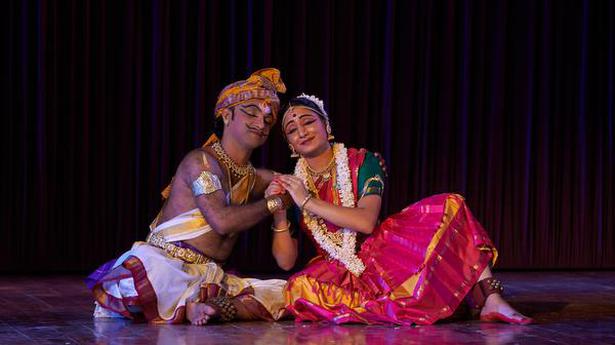 Tagore’s Shyama — An ode to love

The power and the glory of Tagore’s dance drama, Shyama, was in ample display at a recent production at Kalakshetra Foundation

One of the most well-known dance dramas by Rabindranath Tagore, Shyama traces its origin to his long poem, ‘Porishodh’, which, in turn, was based on a story in the book, The Sanskrit Buddhist Literature of Nepal, by Rajendralal Mitra. Like most of Tagore’s women, the eponymous heroine – the lead dancer in the royal court – is a flawed but richly rounded character, who commits a wrong to find fulfilment in love. The songs in the play trace the entire gamut of emotions experienced by the characters, from peaks of elation and ecstasy to the pits of shame and guilt.

We grew up listening to Shyama on LP played on my mother’s HMV Fiesta record player and attended a few performances too. But most of them, save one, were productions by Bengali groups. So the announcement that Shyama will be staged as part of the 68th Annual Art Festival of Kalakshetra Foundation at Bharata Kalakshetra Auditorium, gave me a pleasant thrill of nostalgia mixed with eager anticipation. I was not disappointed.

According to eminent Tagore scholar Abu Sayeed Ayuub, though Shyama is ultimately a tragedy, the running theme is romance, between Shyama and the young merchant, Bajrasen, or the unrequited pining of Shyama’s young admirer, Uttiya. After watching a performance, Ayuub had called Shyama a geeti natya (musical) rather than a nritya natya (dance drama), since he felt that the dance was superfluous compared to the powerful lyrics.

Ayuub might have changed his opinion had he watched Rukmini Devi’s choreography in the Kalakshetra production. Monali and Hariprasad, who handled all the singing, changed the styles subtly with each character. If Hariprasad as Bajrasen spoke with an accent, that is alright – in the play, he is a videshi after all. The accompaniment was superb, especially the flute by Sashidhar that lingered on. The dancers were nonpareil, as expected, but Jayakrishnan as Kotal deserves special mention. Kotal (kotwal) is the police officer, who orders the beheading of Uttiya.

For the sake of Shyama, Uttiya takes the blame for a crime Bajrasen is (falsely) accused of. Shyama repents, after agreeing to Uttiya’s sacrifice, driven by her passion for Bajrasen. When she runs to Kotal asking to be punished for her sins, he pushes her away since he is under pressure to close the case. Uttiya is beheaded. At this critical juncture, Saakshi’s dance as Shyama, with superb lighting and Monali’s singing from the heart, were one of the most powerful elements in the show. Haripadman’s Bajrasen was especially touching towards the end, when he laments not only the loss of Shyama but also his inability to forgive her.

I hope Shyama becomes a regular part of the Kalakshetra repertoire. The thoughtful English surtitles made the drama accessible to all.

The writer is a professor

Denial of responsibility! TechiLive.in is an automatic aggregator around the global media. All the content are available free on Internet. We have just arranged it in one platform for educational purpose only. In each content, the hyperlink to the primary source is specified. All trademarks belong to their rightful owners, all materials to their authors. If you are the owner of the content and do not want us to publish your materials on our website, please contact us by email – [email protected]. The content will be deleted within 24 hours.
Bharatanatyamentertainment newsEntertainment updateHaripadmanKalaksehtra Arts FestivalKalakshetra Foundationlovenews update
0
Share