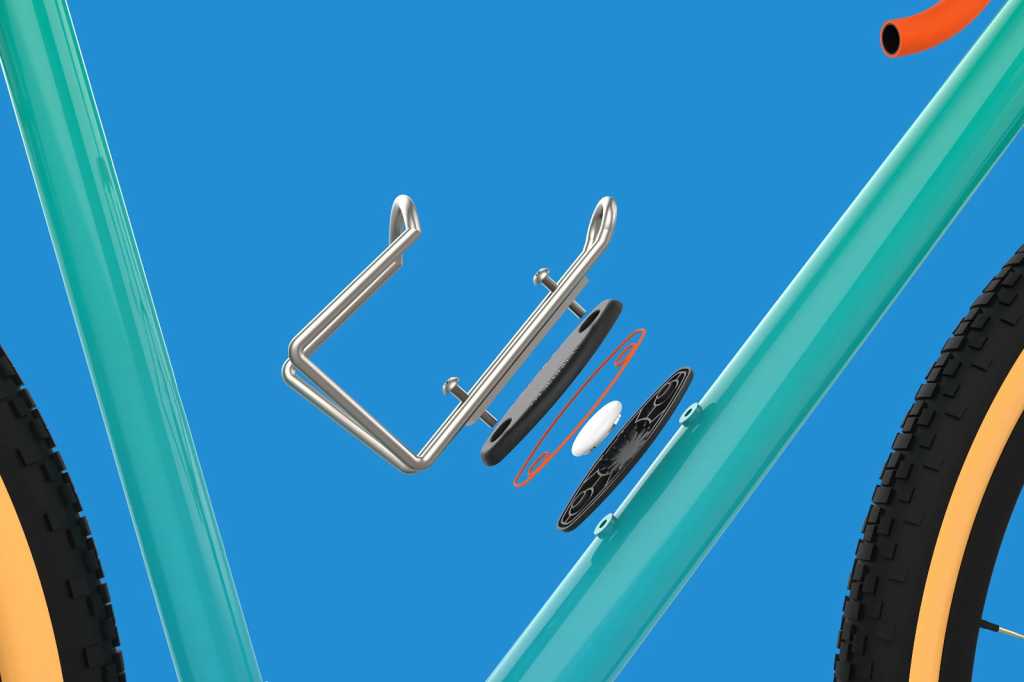 After years of substantial declines, bicycle thefts in the United States spiked in many cities since 2021. Bikes were in short supply during the pandemic, perhaps spurring a temporary rise in them going missing. You can add an AirTag tracker to a bike with a standard water-bottle cage mount with ElevationLab’s TagVault: Bike, a rugged, waterproof case that’s part of a series of similar items from the firm.

The TagVault: Bike is a lozenged-shaped plastic shell. An AirTag nestles inside its waterproof seal. The kit comes with two 1-inch (26 mm) long titanium screws in the M5 x 0.8 bolt format used for nearly all water-bottle mounts. ElevationLab offers shorter (0.8 inch/20 mm) screws for using the case without a water-bottle cage. The kit comes with a steel T20 L-shaped wrench. The case weighs about 0.9 ounces (26 grams), an important detail for riders aiming for the lowest-possible cycle weight.

Unlike the company’s TagVault: Keychain and TagVault: Pet, no additional screws secure the AirTag within the case. I found it awkward to maintain pressure on the case to keep the AirTag inside while also managing the water-bottle cage and the screws to attach it. For an easier installation, get a second pair of hands or tape the assembly down to manage driving the screws in separately.

This handling issue applies equally when you need to replace the battery. You’ll have to disassemble the whole setup to gain access to the AirTag. I don’t see any better way to obscure and secure one, but it’s something to keep in mind as a roughly annual ritual.

The case is a matte black, rendering it unobtrusive. Screwed in between a cage and the frame, a thief would first have to recognize it and then work hard to remove it quickly. Casual thieves might ignore it altogether, rendering a bike’s recovery simpler.

It’s also a memory aid. As more people took up bike riding in many countries during the pandemic, finding a place to lock up one’s bike became harder. A regular commuter might lose track of where they stowed their bike for the day. A combination of long-range Find My network, the loud sound an AirTag can play, and short-range Precision Finding could help guide you right to it.

While a little awkward to attach the case to a bike and remove it to replace the battery in an AirTag, the low-profile design should keep the nature of what it contains on the low down. Whether worried about theft or just finding your bike in a sea of others, the TagVault: Bike provides an easy way to put a tracker on your cycle.

Denial of responsibility! TechiLive.in is an automatic aggregator around the global media. All the content are available free on Internet. We have just arranged it in one platform for educational purpose only. In each content, the hyperlink to the primary source is specified. All trademarks belong to their rightful owners, all materials to their authors. If you are the owner of the content and do not want us to publish your materials on our website, please contact us by email – [email protected]. The content will be deleted within 24 hours.
airtagattachmentbikeBikesgadget updatereviewScrewsTagVault
Share

Biggest Supermoon of 2022: Dates, days and what makes it special – Times of India