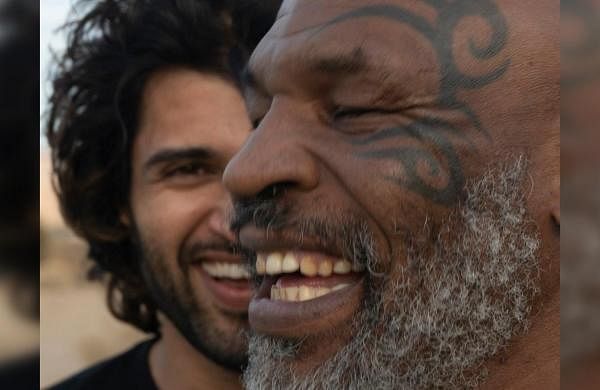 CHENNAI: The team of director Puri Jagannadh’s upcoming film, ‘Liger’, starring actor Vijay Deverakonda in the lead, on Thursday released a special video in which the entire team sent its birthday wishes to boxing legend Mike Tyson, who is making his debut in Indian cinema with the film.

What’s more, the video also had making visuals from the film’s US schedule. As is known, the scenes of Mike Tyson were filmed in the US.

Happy Birthday @MikeTyson
I never even dreamt of meeting you, forget all the things I got to do with you. You are a memory for life #Liger pic.twitter.com/urFy4t2diJ

Ananya Pandey will be seen playing the female lead opposite Vijay Deverakonda in the film.

In association with Puri Connects, the film is being produced jointly by Bollywood’s leading production house Dharma Productions.

Puri Jagannadh, Charmme Kaur, Karan Johar and Apoorva Mehta together are bankrolling the film on a grand scale.

The film has cinematography by Vishnu Sarma and stunts by Kecha from Thailand.

‘Liger’ is currently in its post-production phase. Being made in Hindi, Telugu, Tamil, Kannada and Malayalam, the pan Indian movie is scheduled to release in theatres worldwide on August 25 this year.

Denial of responsibility! TechiLive.in is an automatic aggregator around the global media. All the content are available free on Internet. We have just arranged it in one platform for educational purpose only. In each content, the hyperlink to the primary source is specified. All trademarks belong to their rightful owners, all materials to their authors. If you are the owner of the content and do not want us to publish your materials on our website, please contact us by email – [email protected]. The content will be deleted within 24 hours.
Ananya PandeyBirthdayBoxingchampentertainment newsEntertainment updateHappyLiger
Share

Viruses can change your scent to make you more attractive to mosquitoes, new research in mice finds