Notice: amp_is_available was called incorrectly. `amp_is_available()` (or `amp_is_request()`, formerly `is_amp_endpoint()`) was called too early and so it will not work properly. WordPress is currently doing the `pre_get_posts` hook. Calling this function before the `wp` action means it will not have access to `WP_Query` and the queried object to determine if it is an AMP response, thus neither the `amp_skip_post()` filter nor the AMP enabled toggle will be considered. It appears the theme with slug `publisher` is responsible; please contact the author. Please see Debugging in WordPress for more information. (This message was added in version 2.0.0.) in /home/runcloud/webapps/techilive/wp-includes/functions.php on line 5313
 Telugu audience has to accept me, says dancer Sandhya Raju - TechiLive.in 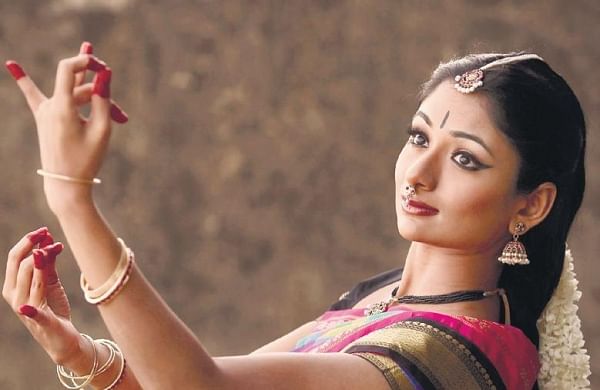 Telugu audience has to accept me, says dancer Sandhya Raju

HYDERABAD: Sandhya Raju is surrounded by some enviably powerful people. Her father, PR Venketrama Raja, is the Chairman of Ramco Group; her father-in-law, Byrraju Ramalinga Raju, is the founder of Satyam Computers Services Ltd.

Her dance guru is Padma Bhushan awardee, Vempati Chinna Satyam. An accomplished Kuchipudi dancer, Sandhya Raju is now turning actor with her debut film, Natyam, in which she also dons multiple hats: that of a production designer, stylist, choreographer and even producer. Here, she talks about her love for dance and how it has come to result in her entering cinema:

Tell us a little about your dance background…

I began learning Kuchipudi at the age of nine from Vempati Chinna Satyam in Chennai. I have performed with him extensively in India and foreign countries. I was part of his last production when I was 15, a three-hour ballet in which I played Lord Krishna. We toured over 100 cities in the USA and the programme was a huge success. I have delivered more than 700 performances across India, Asia, Europe, USA, and South Africa.

How did acting enter your scheme of things?

It was not a part of my life. I was born into a business family and turning into a classical dancer was a departure from the norm. I grew up hearing about how my guru trained legendary actors like Jayalalithaa, Hema Malini, NT Ramarao and Bhanupriya garu. When I began getting opportunities in modelling, stage theatre performances and short films, I could not say no. I wanted to take my skill set to the next level and see how I would perform in other spaces. Cinema was a natural progression after I tasted success with my short film, Natyam.

How did dance help you as an actor?

Dance is the expression and communication of emotion. It helped me understand how to withstand tremendous amounts of pain and pleasure and stay focused on the craft. Dance gave me control over my body, made me more self-aware and helped me portray different characters.
In dancing, you don’t get another take (smiles). Acting, however, always gives you room for improvisation. In dance, we end up practising the same expression and movement for years. In acting, there’s always the surprise element of spontaneity. I think of them as two different board games with different rules.

How did you react when you saw yourself on screen?

I didn’t know what to feel. I grew up worshipping dance and its exponents, like my guru. I don’t have enough knowledge or experience to put myself in the context of cinema. However, Revanth Korukunda, the director of Natyam, believed in my screen presence and my characterisation. I simply followed his vision.

Was it a coincidence that one of your favourite artists, Bhanupriya, is cast in Natyam?

I would say her presence in our film is more of a sentimental blessing and value addition. Bhanupriya garu has played my mother in the film. She is sweet and like a sister to me. She doesn’t even take help for applying make-up. She is an inspiring woman.

Tell us about how you got into character for this film.

A lot of research went in to portray Sitara, who is also a classical dancer. We discussed about her age, background, economic status. How do people perceive women in her town? You can’t create anything from nothing. We took references from interviews of dancers and observing characters of different films. The drive in the story is her intensity and passion for dance. It was one of the major factors that helped me mould my body language.

Breaking into a new territory

How do you sum up the experience of working in this film?
Humbling. Apart from acting, I have worked as a production designer, stylist, choreographer and have also doubled up as the producer of the film. I hardly got time to think about myself and chose to underplay my importance. I have developed respect for crew members who put themselves in the
background. I see this project as an eye-opener in understanding the Telugu film industry. I
had never interacted with anyone from the industry in the context of filmmaking. I don’t know if they will accept me or reject me as an actor.

The film industry is also thought of as a man’s world. Was this a challenge for you?

Be it business or cinema or banking, it’s still a man’s world out there. I think my experience
as the Chairperson of the Young FICCI Ladies Organisation (YFLO) enabled me to understand that women have lesser financial independence. The pay disparity is high, and this reflects in every industry including cinema. I don’t want to isolate the film industry in this criticism. In the future, we may see more and more women take financially independent decisions and take up careers like
scriptwriting, direction, production and acting. Currently, the women who work behind the scenes are not too many in number; the ones who are in, put in a lot of hard work. I salute them.

How difficult was it to handle different departments in cinema? Did you enjoy the process?

I am proud of my work; I am not going to deny that it was a lot of hard work. I didn’t have the luxury of free time… which, I think, is necessary for selfintrospection. I was always on my toes. Luckily, I was always in sync with my director and we didn’t let each other down in any aspect of the filmmaking.

Were you conscious of any benefits you may have enjoyed, being a member of such a powerful family?

My family never wanted me to be a pampered homemaker. When you come from a business family and have all the luxuries, what you do in your free time becomes important. I understand that a lot of women from lower economic strata doesn’t enjoy these privileges and when you are blessed with it, you should use it responsibly. Be it in contributing to society or bettering my abilities, my family has always encouraged me to be my own person. I don’t think I encountered any negativity. My husband, Rama Raju, is a private person and is proud of me for chasing my dreams. He wants me to spread my wings and fly to great heights.

No idea (smiles). I think that’s the beauty of my life today. Even during the lockdown, I spent my time choreographing new Kuchipudi pieces. I don’t know what I am going to face tomorrow. I believe that once you are performing art not for yourself, but for the audience, they decide what you do next. I
think they will decide how I take my artistic journey forward. Have you started accepting yourself as an actor? It’s not about individuals, including me, accepting my talent. The Telugu audience has to accept me.

Denial of responsibility! TechiLive.in is an automatic aggregator around the global media. All the content are available free on Internet. We have just arranged it in one platform for educational purpose only. In each content, the hyperlink to the primary source is specified. All trademarks belong to their rightful owners, all materials to their authors. If you are the owner of the content and do not want us to publish your materials on our website, please contact us by email – admin@techilive.in. The content will be deleted within 24 hours.
AcceptaudienceByrraju Ramalinga Rajudancerentertainment newsEntertainment updatenews updatePR Venketrama Raja
0
Share

After decadal low of 1% growth last fiscal, dairies to log 5% to 6% growth this fiscal, says Crisil