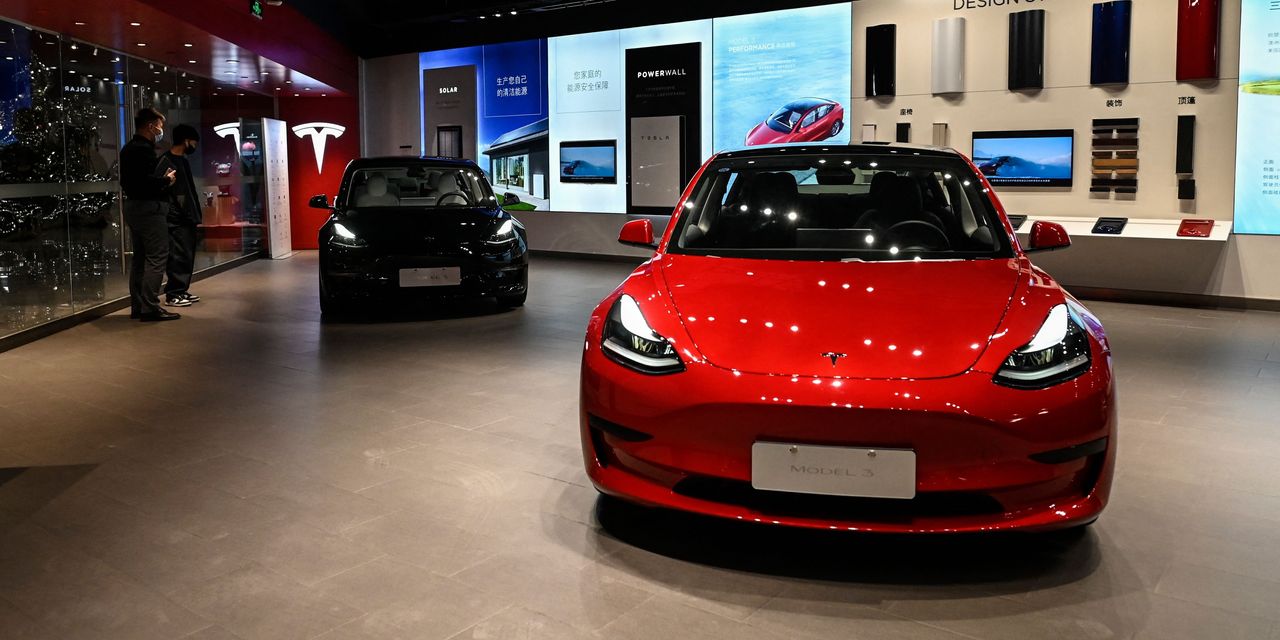 The electric-car maker on Wednesday reported second-quarter results that topped expectations. But it also demonstrated the challenges confronting it, including the sting of supply-chain disruptions, the global chip drought and higher materials and logistics costs.

Tesla reported $2.3 billion in second-quarter profit, ahead of the $1.9 billion Wall Street was expecting but below its record quarterly profit of $3.3 billion in the first three months of the year. It generated $1.1 billion in profit during last year’s second quarter.

“In spite of all these challenges, it was one of the strongest quarters in our history,” Chief Executive

said on an earnings call. “It’s been kind of supply-chain hell for several years,” he added.

Customers, on average, paid more for Tesla’s cars during the period, helping the company generate $16.9 billion in second-quarter revenue, down from $18.8 billion in the first quarter.

Global supply-chain disruptions and labor shortages, among other challenges, kept Tesla from consistently running its factories at full capacity, the company said.

Chief Financial Officer Zach Kirkhorn said Tesla is still aiming for 50% growth over 2021, though he acknowledged that reaching that target has become more difficult.

Mr. Musk had struck a more optimistic tone in April, saying the company likely would produce more than 1.5 million vehicles this year, up some 60% over last year and ahead of its long-term target of increasing deliveries by an average of 50% annually.

Tesla’s stock price has fallen by around 30% in 2022 amid a broader drop in equities and certain company-specific headwinds. It has had trouble getting two new factories up to speed, one of them in Germany and the other outside of Austin, Texas, Mr. Musk said in late May. At the time, he called the plants “gigantic money furnaces.”

Tesla also has laid off staff in recent weeks, after Mr. Musk told employees in June that the company had “become overstaffed in many areas.”

Mr. Musk on Wednesday said he expects inflation to decline toward the end of this year, citing commodity prices that are trending lower. However, he cautioned that “economic prognostication is fraught with error.”

Asked if Tesla is seeing a slowdown in consumer demand, Mr. Musk pointed to the long wait times many customers face for the company’s vehicles.

“Right now our problem is very much production,” he said. The economic situation is uncertain, though. “Consumer sentiment is all over the map,” he noted.

Tesla sold $936 million worth of bitcoin in the second quarter to maximize its cash position as it dealt with the closure of its Shanghai factory due to local Covid-19 lockdowns, Mr. Musk said. The company has unloaded around 75% of its $1.5 billion initial position in the cryptocurrency, leaving it with around $218 million worth of digital assets as of the end of June.

“We were concerned about overall liquidity of the company given shutdowns in China,” Mr. Musk said, adding that Tesla is open to increasing its bitcoin holdings in the future.

Mr. Musk has been a vocal commentator on digital currencies. Tesla briefly accepted bitcoin as payment for its vehicles but suspended that policy in May 2021, citing concerns about the use of fossil fuels to mine bitcoin. Mr. Musk said at the time that Tesla wouldn’t sell any bitcoin.

The price of bitcoin slumped after Tesla posted its results, according to CoinDesk.

The company said foreign-exchange pressures also weighed on results, with the dollar up strongly against many other currencies.

Mr. Musk, who is embroiled in a legal battle over his $44 billion deal to acquire

said he plans to continue working at Tesla for as long as he can. A Delaware judge on Tuesday agreed to Twitter’s request to fast-track a lawsuit seeking to compel Mr. Musk to consummate his purchase of the social-media company.

The company delivered around 254,695 vehicles to customers in the three months ended in June, down from 310,048 in the first quarter. Deliveries were up roughly 27% from last year’s second quarter, helped by the fact that Tesla reached a monthly production record in June.

What’s your outlook on Tesla? Join the conversation below.

Tesla, like much of the auto industry, has been hiking prices as suppliers request more for their products. U.S. customers who ordered the long-range version of Tesla’s Model Y compact sport-utility vehicle in late June could expect to pay around $68,000, or some $14,000 more than they would have if they ordered the model a year earlier, according to Bernstein Research.

Mr. Musk reiterated that he hopes to reduce vehicle prices, which he said were at “embarrassing levels.”

The chip shortage is having a greater impact on Tesla’s energy business than its car business, the company said.

It added roughly 250 fast-charging stations to its global network during the second quarter. The company has been planning to open that system in the U.S. to electric vehicles made by other manufacturers.

Tesla, which remains in an aggressive phase of ramping up production, also said its global capacity to make cars has increased since the end of the first quarter.

Denial of responsibility! TechiLive.in is an automatic aggregator around the global media. All the content are available free on Internet. We have just arranged it in one platform for educational purpose only. In each content, the hyperlink to the primary source is specified. All trademarks belong to their rightful owners, all materials to their authors. If you are the owner of the content and do not want us to publish your materials on our website, please contact us by email – [email protected]. The content will be deleted within 24 hours.
Alternative Fuel VehiclesautomotiveBankingBanking/Creditbusiness newsBusiness updateC&E Industry News FilterCapacity
Share