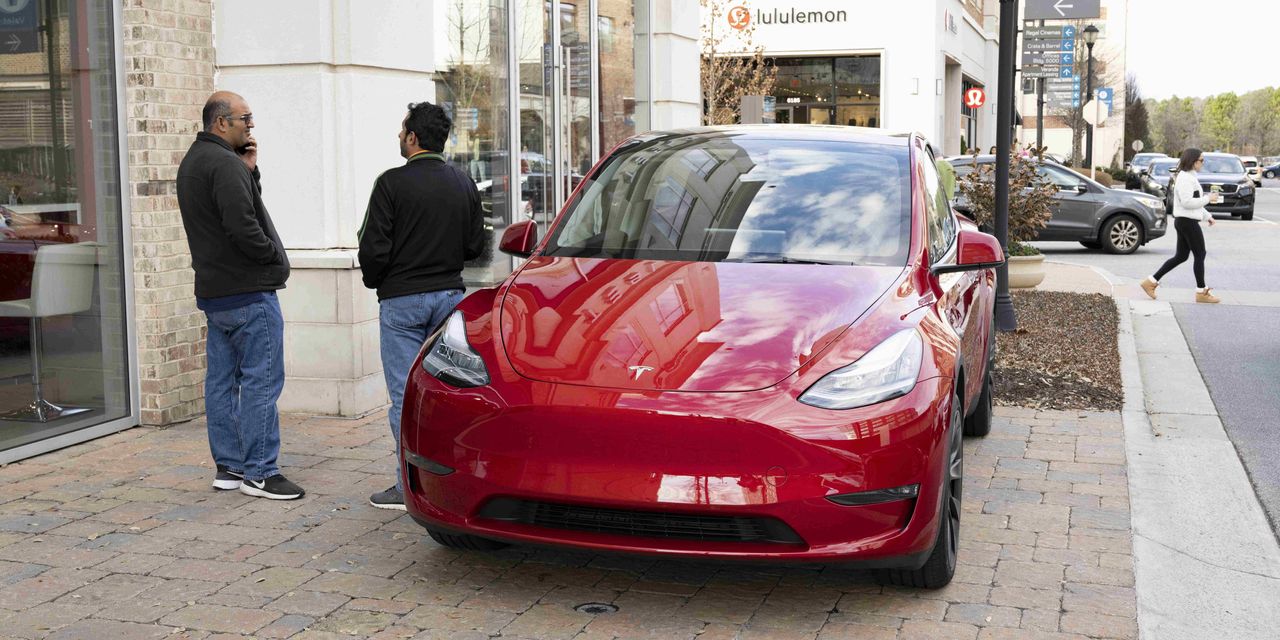 is poised to report record quarterly profit for the final three months of 2022 as Wall Street hungers for clarity on the company’s growth plans in light of apparent demand weakness.

‘s electric-car maker is forecast to report nearly $3.8 billion in fourth-quarter profit, up around 62% from a year earlier, according to analysts surveyed by

even as vehicle-delivery growth slowed.

Tesla, due to release results after market close on Wednesday, is expected to have generated some $24.7 billion in sales for the period, up nearly 40% from the year prior, FactSet data show.

Sign up to receive email alerts about articles related to Tesla.

Wall Street’s faith in the EV maker has been shaken, however, as the company faces challenges including higher interest rates, stiffer competition and diminished brand popularity. In 2022, Tesla came up short of its annual growth target, lost about $675 billion in market valuation and saw its share price fall 65%, its largest annual decline to date. The stock has since recovered somewhat.

In the first weeks of the new year, Tesla sought to stoke demand by slashing vehicle prices, in some cases by nearly 20%, an unusual strategy by traditional auto-industry standards.

Mr. Musk, the company’s chief executive, foreshadowed the move last month, suggesting on Twitter that the economic environment was forcing a choice between growth and profits.

“My bias would be to say…let’s grow as fast as we can without putting the company at risk,” he said.

The company has in the past been strapped for cash, but is navigating the current economic turmoil from a position of relative strength. Successive periods of profit have helped it build up a cash pile, prompting some investors to call for a sizable share repurchase. In October, Mr. Musk said Tesla might pursue a share buyback of $5 billion to $10 billion in 2023, though he cautioned more recently, “It wouldn’t be smart to do a buyback and then discover the recession is worse than 2009.”

Photos: The EV Rivals Aiming for Telsa’s Crown in China

Tesla has a higher operating margin than many of its rivals, giving it more wiggle room to absorb price cuts. Analysts expect the company to grow by around 46% in 2023 to around 1.91 million vehicle deliveries, shy of its long-term annual growth target of 50%.

Tesla aspires to sell 20 million vehicles annually by 2030, a milestone that would easily make it the largest car manufacturer by volume. Mr. Musk has said achieving that feat is likely to require about a dozen factories.

The company said Tuesday that it plans to invest more than $3.6 billion on an expansion in the Reno, Nev., area. That includes money for two new factories where Tesla said it plans to manufacture battery cells and increase production of the semitrailer truck it brought to market in December. The company also has filed paperwork to expand its plant near Austin, Texas.

Tesla, meanwhile, is expected to enter the pickup-truck market later this year with its long-awaited Cybertruck, challenging offerings by

Tesla’s recent price adjustments have undercut some competitors’ EVs and inspired mixed feelings among consumers, prompting some to move ahead with a purchase while aggravating certain Tesla owners.

John White, a retiree in Scottsdale, Ariz., was inspired to take delivery of his white Model Y in December after Tesla, racing to lift year-end results, offered a $3,750 discount for doing so. That brought the vehicle cost down to $62,240, before upgrades, fees and taxes. That vehicle now costs $53,490 after Tesla cut prices this month.

“I just sort of feel like a pawn in their ‘let’s make the numbers’ game,” said Mr. White, who otherwise likes the crossover vehicle, his first Tesla.

Do you think Tesla will be able to maintain its status as the leader in the EV market? Why or why not? Join the conversation below.

The company didn’t immediately respond to a request for comment.

Tesla’s earnings release comes in the middle of a federal trial in San Francisco over Mr. Musk’s 2018 tweets proposing to take Tesla private. Investors say they lost billions of dollars because of Mr. Musk’s statements, some of which a judge has said were untrue. Mr. Musk testified Tuesday that he tweeted about a possible deal because he wanted to share his thinking with shareholders and convey that funding wouldn’t be an issue.

Mr. Musk has said he has been spending much of his time trying to turn around Twitter Inc. since buying the company in October, spurring calls by some Tesla investors for him to devote more time to the car maker. The billionaire has said he plans to hand over running Twitter to someone else.

Denial of responsibility! TechiLive.in is an automatic aggregator around the global media. All the content are available free on Internet. We have just arranged it in one platform for educational purpose only. In each content, the hyperlink to the primary source is specified. All trademarks belong to their rightful owners, all materials to their authors. If you are the owner of the content and do not want us to publish your materials on our website, please contact us by email – [email protected]. The content will be deleted within 24 hours.
Alternative Fuel VehiclesautomotiveC&E Industry News FilterContent TypescorpearningscorporateCorporate/Industrial Newsearnings
0
Share

Farhan has surprised me, was extremely worried about him:…

Annie Wersching, who portrayed Tess in The Last of Us,…