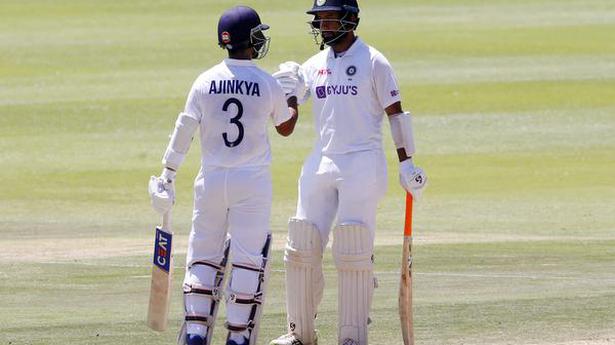 Test in the balance: Pujara

Cheteshwar Pujara said the “match was in the balance,” but was confident the Indians would pull off a series clinching win on day four.

“We need to get Elgar out early,” he said

Pujara, who made a stroke-filled 53 on a difficult pitch in the Indian second innings said, “I just wanted to put away the bad balls. Because on this pitch you do not know when you would receive an unplayable ball.”

He added, “I was happy with the way I batted. I was even happier with my partnership with Ajinkya Rahane because it gave India runs to fight with.”

On the effect of the roller on the pitch, he said, “The surface plays good for an hour after the heavy roller is used. Then the cracks start opening up again.”

Asked whether there was pressure on himself and Rahane ahead of the Indian innings, he said, “All the chatter is outside. The team-management is backing us. We are working hard at our batting, following a process and the runs will come.”

On skipper Virat Kohli’s fitness after a back spasm kept him out of this Test, he said, “He is getting better. I feel he will be fit soon.”

On Rishabh Pant’s batting and Wednesday’s on-field skirmishes, he said, “That’s the way Pant bats. Perhaps, what shots to play and at what time, the team-management may have a chat with him.”

He added, “As a unit we stay and fight together. If someone says something to us, you can be sure we will give it back to him.”

Justin Sammons, South Africa’s batting consultant, said the pitch was demanding, there was uneven bounce and said a lot of the home team’s hopes hinged on skipper Dean Elgar.

“He can play for long periods, and when he is there, the others can bat around him. And build partnerships. So his presence is very important for us.”

Sammons had words of praise for Indian bowling and said, “It was testing and relentless. The pitch too is playing tricks.”

Sammons expressed the confidence that South Africa can chase down the target.

Denial of responsibility! TechiLive.in is an automatic aggregator around the global media. All the content are available free on Internet. We have just arranged it in one platform for educational purpose only. In each content, the hyperlink to the primary source is specified. All trademarks belong to their rightful owners, all materials to their authors. If you are the owner of the content and do not want us to publish your materials on our website, please contact us by email – [email protected]. The content will be deleted within 24 hours.
BalanceCheteshwar Pujaranews updatePujaraSA vs INDsouth africa vs indiaSouth Africa vs India second testsports news
Share

TikTok is helping Gen Z with mental health. Here’s what it can and can’t do

Explained: Why Apple may be forced to change its charging…