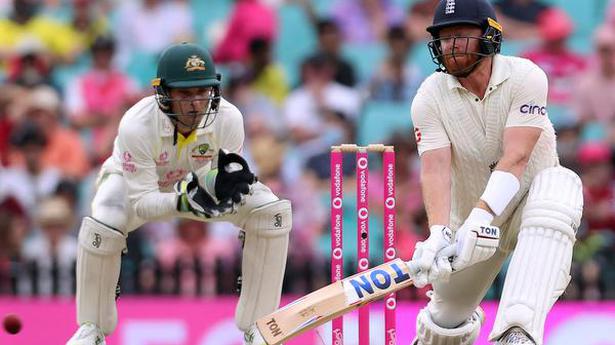 The Ashes | Bairstow leads England fightback with a fine ton

Jonny Bairstow broke through for his first Test hundred in Australia and a wincing Ben Stokes reeled off a counter-punching half-century to help England recover from another collapse in the fourth Ashes Test here on Friday.

Bairstow screamed in delight after he cut Pat Cummins to the ropes to raise his third Ashes Test century, but the first Down Under.

Bairstow reached his ton off the third-last ball of the third day for England’s first century in this series as he and Stokes led a recovery after England was in dire straits at 36 for four.

England has already lost the Ashes, but it at last showed some fight.

Stokes, grimacing in pain from a side strain picked up while bowling on Thursday, posted his highest score of the series with 66.

Stokes dug deep to club nine fours and a massive six off Nathan Lyon over extra cover but the off-spinner had the last word, trapping Stokes plumb lbw with a skidding delivery to end his brave 91-ball knock.

Stokes had a massive slice of luck on 16 when he was given out, only to win a review when replays showed a Cameron Green delivery actually hit the off-stump but the bail somehow was not dislodged.

Stokes shared in a restorative 128-run stand for the fifth wicket with Bairstow to pull England out of the mire.

Lusty hitting from Mark Wood gave England further momentum before he was caught by Lyon at backward point off a Cummins lifter for 39 off 41 balls. Wood pointed to the ball coming off his helmet but in the review ‘Snicko’ detected a faint top-edge that then deflected off his helmet.

Boland at it again

The fightback came after Scott Boland continued his wicket-taking exploits for Australia with more scalps including England skipper Joe Root for a duck.

Boland, who took a stunning six for seven on his Test debut in the third Test in Melbourne, knocked over Zak Crawley’s off-stump and then had Root caught in the slips for a seven-ball duck.

It got worse for England when Dawid Malan was caught by Usman Khawaja at leg-slip for three off Green in a trap set up for the catch.

Mitchell Starc took his series tally to 15 wickets when he took out Haseeb Hameed’s middle-stump for six with a beautiful delivery.

Denial of responsibility! TechiLive.in is an automatic aggregator around the global media. All the content are available free on Internet. We have just arranged it in one platform for educational purpose only. In each content, the hyperlink to the primary source is specified. All trademarks belong to their rightful owners, all materials to their authors. If you are the owner of the content and do not want us to publish your materials on our website, please contact us by email – [email protected]. The content will be deleted within 24 hours.
AshesBairstowcricket commentarycricket updatesenglandfightbackFinelatest cricket news
Share

Scientists reveal the magnificent complexity of the Alhambra

Healing, Heartbreak, and Heroism in the ER

Actress Drashti Dhami reveals what made her say yes to…