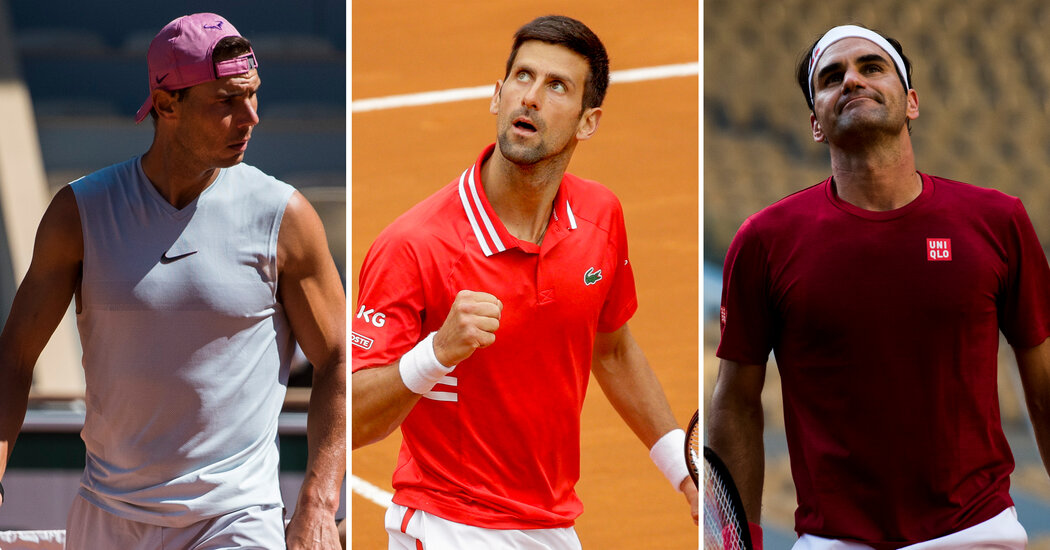 The Big Three Vie at the French Open, Each With His Own Motivation

PARIS — One of them focuses on numbers, hoping they will produce the validation he has always craved.

Another one has come to play on the court that turns him into an apotheosis of his sport, and to protect this place as his personal kingdom.

The third yearns for whatever there is left, and prepares for what comes next.

The Big Three on the men’s side of tennis — Novak Djokovic, Rafael Nadal and Roger Federer — are playing in a Grand Slam for the first time in 18 months. Through a quirk in the sport’s seeding system, they are all in the same half of the draw. Djokovic could face Federer in a quarterfinal and Nadal in a semifinal. They are not getting any younger. Djokovic and Nadal are 34 and Federer, at 39, is sputtering through his comeback from knee surgery. There may only be a few more slams like this one.

For years, they have been blessed with ethereal tennis gifts, so formidable for so long that opponents can feel that they are down a set even before the first point is played. It has been hard for slighter players to imagine beating them, let alone actually doing so.

They still love to compete, really love to win (though Federer has won just once all year), and embrace the global celebrity that comes with being a tennis superstar. Any debate about who will end his career with the most Grand Slam singles titles and have a rightful claim to being the greatest quickly becomes reductive.

They diverge dramatically, however, when the conversation shifts to what drives each of them to continue playing long after they have made hundreds of millions of dollars and solidified their reputations for history. And these thirtysomethings are well past the sell-by date of the great players of every era that preceded them.

But at this singular moment in their careers, with Federer and Nadal tied at 20 Grand Slam wins and Djokovic close behind with 18, only Djokovic is so intently focused on the numbers. Djokovic, who just celebrated his 34th birthday and in the eyes of most experts is the most likely to finish on top, leaves no doubt that the chase for scoreboard supremacy motivates him.

“Whether I think about winning more slams and breaking records, of course, of course, I do,” Djokovic said in February, after beating Daniil Medvedev in the Australian Open final. “And most of my attention and my energy from this day forward, until I retire from tennis, is going to be directed in majors, trying to win more major trophies.”

That sounded a lot different from Nadal when he spoke about his own motivations earlier that week. Nadal allowed that, yes, he wanted to win Grand Slams. The 13-time French Open champion is always the favorite here on the red clay, but not anywhere else, which may be part of the reason he said that winning more slams than his rivals is not so important. Too much ambition, he said, can leave you frustrated when things don’t go your way.

“For me the main thing is to come back home with personal satisfaction that you gave it everything,” he said. “That’s what gives me happiness and makes me stay calm.”

The Grand Slam season of tennis takes a long break between the end of the Australian Open and the start of the French Open, which begins Sunday. The break felt even longer this year, as the Big Three skipped a series of major tournaments to nurse injuries or avoid international travel during the pandemic.

That left time for the verbal dance that Nadal, Djokovic and Federer engaged in about chasing records and legacies and what it means to outdo the others.

In March, Djokovic broke Federer’s record for the most weeks at the top of the world rankings — a ridiculous 311. He then announced that having that mark in the bag gave him the freedom to reduce his schedule and focus on peaking for the Grand Slams, even if it meant losing opportunities to earn rankings points and maintain his perch as the world No. 1.

Days later, Federer returned to competitive tennis after more than a year of recovering from knee surgeries. Ahead of his return, he essentially took himself out of any competitive conversation with Nadal and Djokovic, explaining that his obsession had been breaking Pete Sampras’s old record of 14 Grand Slam titles, which he did in 2009.

“The guys are unreal,” he said of Djokovic and Nadal. “I hope they can do everything they possibly want and that they look back with no regret. We want to leave the game with no regrets and I think, from that standpoint, we all sleep very well at night.”

He said his goal was to be at his best for Wimbledon in June, and to get that rush of playing for something important, in front of fans, against the best players in the world.

Then things began to get interesting.

In April, during a promotional interview for a beer sponsor, Nadal said Djokovic was “obsessed” with winning more Grand Slam titles than his rivals.

“It means a lot to him, all of this stuff, like he’s always saying and talking about these records,” Nadal said. “It’s not my approach to my tennis career.”

He insisted that he did not mean it in a negative way, and yet.

Days later, as Djokovic prepared to play the Belgrade Open, he rejected the characterization.

“I never found it hard to say: ‘I want to break that record or reach a certain goal,’” he said.

Whether playing it cool or caring too much, all will be focused on the same thing over the next 14 weeks, competing on red clay at Roland Garros, the grass at Wimbledon, and the hard courts at the United States Open.

For years, Djokovic has been a hero to his homeland and the Serbian diaspora, but, rightly or wrongly, something of a party-crasher to what was once an elite two-way rivalry between Federer and Nadal, and even an occasional tennis villain. Fans are more often against him rather than with him, especially when he plays Nadal or Federer. In the last year alone he defied health safety protocols and put on a tennis exhibition that became a coronavirus superspreader event, and accidentally swatted a ball into the throat of a line judge, earning a disqualification from the U.S. Open.

Nearly two decades into his professional career, no one expects him to capture the almost universal adoration Nadal and Federer enjoy, but if he wins more than they do, it will be hard to argue that he is lesser of the three.

He is the only one who has a winning record against the other two, though Nadal inched to within one match, 29-28, when he beat Djokovic two weeks ago in a tight match, 7-5, 1-6, 6-3, in the final of the Italian Open.

Once again, the arena in the park just west of the Eiffel Tower will become their battleground. As they prepared for Paris, each kept true to form.

On May 18, Federer suffered a tough loss to Pablo Andujar of Spain, ranked No. 75 in the world, in his first match at the Geneva Open. He tried to lower expectations, pointing toward Wimbledon, where he has won eight times, and will remain a deity, even if he does not win again.

“Roland Garros is not the goal,” he said. “The goal is the grass.”

Nadal continued to focus on his process and his effort because winning is less predictable. After dispatching Djokovic in Rome, Nadal spoke of bringing passion and effort to the court for each match. In Paris, on Friday, he was focused on his opening round opponent, the young Australian Alexei Popyrin, rather than his statue that tournament organizers had unveiled. “Every round is tough,” he said.

Then there was Djokovic, talking big, hunting for another trophy, then quickly hedging, trying not to sound too obsessed.

“I think I have a good chance to go all the way in Paris,” he said. Then, realizing just what that meant, he added, “Of course, it’s a long shot.”

Denial of responsibility! TechiLive.in is an automatic aggregator around the global media. All the content are available free on Internet. We have just arranged it in one platform for educational purpose only. In each content, the hyperlink to the primary source is specified. All trademarks belong to their rightful owners, all materials to their authors. If you are the owner of the content and do not want us to publish your materials on our website, please contact us by email – [email protected]. The content will be deleted within 24 hours.
Loading...
bigFrenchMotivationnews updateOpensports newssports updatetechi live
0
Share

In Ramadan, fasting is followed by feasting — and traditional dishes