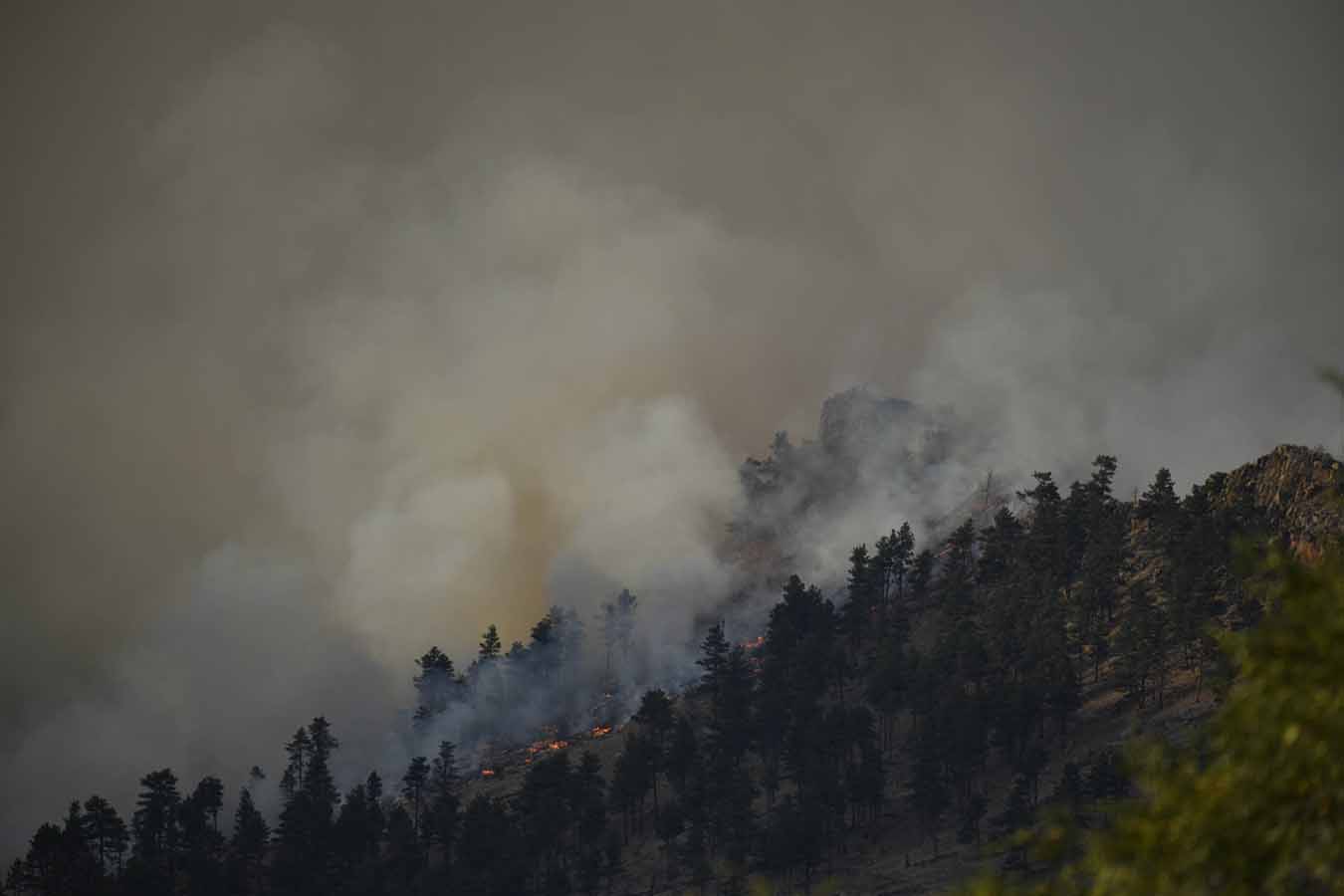 The ‘Burn Scars’ of Wildfires Threaten the West’s Drinking Water

Colorado saw its worst fire season last year, with the three largest fires in state history and more than 600,000 acres burned. But some of the effects didn’t appear until this July, when heavy rain pushed sediment from damaged forests down mountainsides, causing mudslides that shut down sections of Interstate 70 for almost two weeks.

Immense quantities of sediment choked the rivers that supply most of the state’s water. In western Colorado’s Glenwood Springs, the water became so murky that the town twice had to shut off the valves that pump water from nearby rivers to avoid overwhelming its filtration system. City managers sent alerts to the town’s 10,000 residents, telling them to minimize water use until the sediment moved downstream.

Wildfires and their lasting effects are becoming a way of life in the West as climate change and management practices cause fires to increase in number, intensity and acreage burned, while extending the length of the fire season. In “burn scars,” where fires decimated forest systems that held soil in place, an increase in droughts followed by heavy rainfall poses a different kind of threat to the water supplies that are essential to the health of communities.

“You know about it; it’s in the back of your head,” said Glenwood Springs resident Paula Stepp. “But until you face it, you don’t know how it’s going to impact your town.”

Dirty, turbid water can contain viruses, parasites, bacteria and other contaminants that cause illness. But experts say turbid water from burn scars is unlikely to make it to people’s taps, because water utilities would catch it first.

Still, the cost to municipal utility systems — and the residents who pay for water — is immense. Rural small towns in particular face the choice between spending millions of dollars to try to filter turbid water or shutting off their intake and risking shortages in areas where water may already be scarce.

And as fires move closer to communities, burning synthetic materials from houses and other buildings can create toxic compounds that leach into water supplies, which is what happened in California after major fires in 2017 and 2018.

“When we put [fires] out, we become less aware of them,” said hydrologist Kevin Bladon, of Oregon State University. But from a water perspective, “that’s when all the problems start.”

Montana’s capital city, Helena, gets its drinking water supply from the Upper Tenmile Creek watershed in a forest thick with trees killed by beetle infestations. City leaders worry a fire would quickly chew through that dry fuel and leave the watershed exposed to sediment contamination. Despite a logging project that cleared many of those trees two years ago, the fire threat remains and city leaders worry the resulting sediment would overwhelm the water treatment plant and shut down the primary water source for 40,000 people.

“If we had a fire up there, depending on where it is and how big it is, it could put the Tenmile plant out for a season or two,” Helena Public Works Director Ryan Leland said.

To protect against that happening, the city is in the early phases of designing a basin that can trap sediment before the water reaches the plant, Leland. The city also recently announced plans to drill three groundwater test wells, which would give them another drinking water supply option if something happens to the Upper Tenmile watershed. Treated water from the Missouri River is the city’s current backup supply.

The Rocky Mountains and about 200 miles separate Glenwood Springs from Greeley, in northeastern Colorado. But the 2020 fire season caused similar problems in both cities, creating burn scars that later flooded, contaminating water sources.

So far this year, Greeley has had to shut off its intake from the Cache la Poudre River for 39 days because the water was contaminated with sediment, ash and organic matter. “Normally we would never turn it off,” said Greeley water and sewer director Sean Chambers.

To cope, the city has been trading water with a nearby agricultural company that owns reservoirs used for irrigation. The swap gives the turbid water to farmers and redirects the reservoir water to Greeley. “If we didn’t have the trade in place, the cost [of buying water] would be astronomical,” Chambers said.

But Chambers admitted this system is a luxury that smaller towns may not enjoy. Greeley is 10 times the size of Glenwood Springs and has spent more than $40 million this year recovering from the Cameron Peak Fire — the largest fire in Colorado history, which burned for four months in 2020. Those costs may climb as rain continues, he said. Larger towns also tend to have better filtration systems that can handle more sediment, which clogs up filters and requires utilities to add chemicals to remove contaminants before the water is safe to drink.

While dry states like Colorado expect fires each year, recent blazes in wetter places like western Oregon have caught researchers off guard. Last September, fires scorched about 11% of the state’s Cascade mountain range, leaving burn scars above rivers and reservoirs that supply much of the state’s water.

“We have to be very proactive,” said Pete Robichaud, a research engineer with the U.S. Forest Service in Moscow, Idaho

After a wildfire is extinguished, Robichaud’s agency and others send teams of specialists to evaluate the risks that erosion and ash pose to water supplies. Their data can help land managers decide whether to take actions like thinning forests above rivers, dredging contaminated reservoirs, covering the area with mulch or seeds to reduce erosion, or forming a plan for alternative water sources.

Even advance notice of a flood could help immensely, said Stepp, the Glenwood Springs resident. She is the executive director of the nonprofit Middle Colorado Watershed Council, which recently worked with the U.S. Geological Survey to install rain gauges along Glenwood Canyon. These monitor weather upstream and notify downstream water users that a sediment-laden flood could be coming.

She said it is crucial for small communities in particular to partner with state and federal agencies. “Basically, we work with everybody,” she said.

Although debris flows can bring soil bacteria into water supplies, city utilities can disinfect them with chemicals like chlorine, said Ben Livneh, a hydrologist at the University of Colorado-Boulder. But those disinfectants can themselves cause a problem: Organic matter from sediment can interact with these chemicals and create carcinogenic byproducts that are difficult and expensive to remove.

Another waterborne danger comes from chemical byproducts and heavy metals from burned structures. “Those would be potentially really problematic to treat,” Livneh said.

After the 2017 Tubbs and 2018 Camp fires that devastated the Northern California communities of Santa Rosa and Paradise, researchers examining the tap water of nearby homes found benzene and other carcinogens. Public health researcher Gina Solomon at the Public Health Institute in Oakland, California, said the contamination likely came from plastic pipes that melted and leached chemicals into the water.

Smoke and ash from burned structures may also add toxic chemicals to water supplies. “The smoke from the fires is a truly nasty brew,” Solomon said.

California has been relatively lucky when it comes to sediment flow. The years-long drought in most of the state means burn scars remain intact — though a heavy rain could wash down years of debris.

It’s unclear how long burn scars continue to pose a landslide risk, said Bladon, the Oregon hydrologist. But parts of Alberta in the Canadian Rockies, for instance, continued to see extremely turbid water for a decade after a 2003 fire.

“My fear is we may not have seen the worst of it yet,” Solomon said.

Denial of responsibility! TechiLive.in is an automatic aggregator around the global media. All the content are available free on Internet. We have just arranged it in one platform for educational purpose only. In each content, the hyperlink to the primary source is specified. All trademarks belong to their rightful owners, all materials to their authors. If you are the owner of the content and do not want us to publish your materials on our website, please contact us by email – [email protected]. The content will be deleted within 24 hours.
burndrinkingHealth newsHealth updatenews updatescarstechi livethreaten
Share

Planning a visit to Dubai: Here are 5 ways you will travel differently now