Notice: amp_is_available was called incorrectly. `amp_is_available()` (or `amp_is_request()`, formerly `is_amp_endpoint()`) was called too early and so it will not work properly. WordPress is currently doing the `pre_get_posts` hook. Calling this function before the `wp` action means it will not have access to `WP_Query` and the queried object to determine if it is an AMP response, thus neither the `amp_skip_post()` filter nor the AMP enabled toggle will be considered. It appears the theme with slug `publisher` is responsible; please contact the author. Please see Debugging in WordPress for more information. (This message was added in version 2.0.0.) in /home/runcloud/webapps/techilive/wp-includes/functions.php on line 5313
 The custodian of KVN’s legacy - TechiLive.in 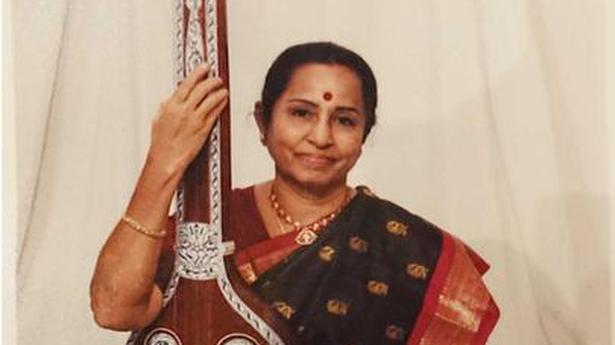 The custodian of KVN’s legacy

Our conversation begins with a disclaimer: I tell Padma Narayanaswamy in the little Tamil I know that I will speak to her mostly in English. “I can’t converse fluently in English though I did have my early education in a convent,” she tells me, but proceeds to speak impeccable English for the next 90 minutes, with the occasional use of Tamil words.

Padma Narayanaswamy, fondly known as ‘Padma mami’, is wife of the legendary Carnatic vocalist, the late Palghat K.V. Narayanaswamy, teacher and custodian of the KVN school of music. She turned 80 on April 7. Known more as KVN’s constant companion and co-performer, Padma assisted him in his teaching assignments at universities abroad and collaborated closely as a co-composer. Her music is about everything that was taught to her, enriched by her own thought and understanding.

“There was no music in my family, but I was extremely passionate about it. My father had too much confidence in me, he thought I would become greater than MS and Ariyakudi,” she laughs. However, it was her sister Neela Chakravarthy, a scientist at BARC, who supported her most. She moved from Secunderabad to Chennai, learnt from K.V. Narayanaswamy, and later joined the Central College of Carnatic Music, Madras, where she also had the opportunity to learn from the great Musiri Subramania Iyer. “I got a government scholarship (1964-68) and studied under Musiri sir. It was not easy — neither music nor life. But nothing seemed greater than music.”

Padma recalls how after her marriage to KVN, she would send away the children to school and lock herself in a room and practise till evening. “KVN would knock at times and ask me to repeat what I was singing. He would tell me what needed improvement,” she says.

“I constantly thought about music. When KVN would teach his students, I too would listen and absorb everything. Even now, I live each day with the music of KVN and other great masters.”

Though she did nurture greater musical ambitions, she has no regrets. An active teacher today, she spends most part of the day training young enthusiasts and conducts classes on Skype for overseas students.

With a flair for Pallavis, Padma has a fine sense of laya and rare insights into the form. But was she ever taught to sing a Pallavi? “Musiri sir once sang a Pallavi to me. I used to observe KVN sing in his kutcheris and during classes at home. I was also very attentive to the inimitable Palghat Mani Iyer’s treatment of laya. I practised very hard. After some years, I gathered the courage to sing a Pallavi before KVN. That is when he realised I was watching and imbibing everything.”

Music, says Padma, is like a ‘temple gopuram’. “KVN used to say you can explore, move around in the layers, but as you reach the pinnacle, you should be focussed,” she recalls. “For me, song is worship. You don’t have to go to the temple.”

Loading...
Denial of responsibility! TechiLive.in is an automatic aggregator around the global media. All the content are available free on Internet. We have just arranged it in one platform for educational purpose only. In each content, the hyperlink to the primary source is specified. All trademarks belong to their rightful owners, all materials to their authors. If you are the owner of the content and do not want us to publish your materials on our website, please contact us by email – admin@techilive.in. The content will be deleted within 24 hours.
Custodianentertainment newsEntertainment updateK V NarayanaswamyKVNsLegacynews updatePadma Narayanaswamy
0
Share