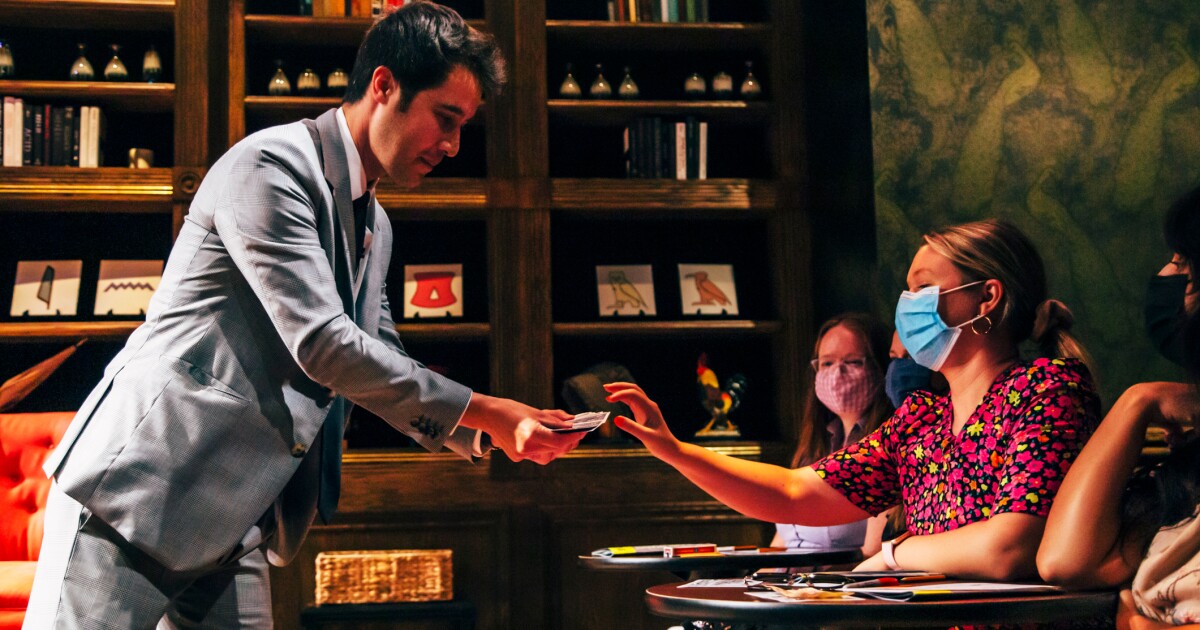 Spending time with puzzle master and magician David Kwong is a bit like hanging out with a dashing and amiable supercomputer programmed to solve the most eccentric problems mankind could dream up for its cognitive amusement.

Last year, I clicked into his virtual show “Inside the Box,” a Geffen Stayhouse offering, and concluded that I’m not really a puzzle person and that this wasn’t exactly what I’d call theater.

I came away from “The Enigmatist,” a critically hailed earlier show now receiving its West Coast premiere at the Geffen Playhouse, with a different verdict. I’m still not a puzzle person, but this showcase of brain-twisters and legerdemain makes for an enjoyable theatrical outing.

Kwong is wittier and friendlier in person. On Zoom, he was agreeable, but a tinge of clever smugness came through.

The biggest difference between the shows, however, is the performance of those in attendance. Last Thursday’s opening night audience, so much livelier than the earlier group of digitally scattered spectators confined to little boxes, was game, quick-witted and clearly overjoyed to be back at the Geffen for the first time since the pandemic darkened the theater.

Critics aren’t known to be the most sociable group, and I’ll admit I was feeling a touch crotchety during the pre-show segment that asks theatergoers to solve four puzzles, two outdoors in the courtyard and two inside in the lobby. The scene was crowded and each puzzle takes some time to figure out.

Everyone’s masked and proof of vaccination is required. But I couldn’t help wondering why, just as we’re getting comfortable again with the idea of public gatherings, we were being forced to stand cheek by jowl with perfect strangers, a few of whom were like those unbudging types at museums who seem to relish blocking everyone’s view.

Breathe, I had to tell myself, as my companion and I managed to solve the puzzles in a reasonable amount of time despite all the jostling. (Apologies if I hurt anyone!) I was told in advance that this task wasn’t mandatory, but your experience won’t be complete if you skip this part of the show. Also, there’s a certain student satisfaction in getting your card punched by an usher each time you answer correctly.

Kwong’s magic is less impressive than his preternatural mathematical and verbal gifts. He begins by reminding the audience that every trick has an explanation and every puzzle a solution. But not everyone has Kwong’s brain. And though I felt a bit deflated by his rationalist preamble — like Blanche in “A Streetcar Named Desire,” I wanted hocus-pocus, not realism — I was bewitched by the processing power of his mind.

A crossword puzzle constructor for the New York Times, Kwong spends most of the show testing theatergoers’ ability to discern patterns not only in words but also in visual images and in aural passages. I wasn’t always sure what he was asking us to do, but there were members of the audience who understood immediately. As quickly as a puzzle was put before them, they were standing up to announce that they had the answer. Never has the Geffen’s Audrey Skirball Kenis Theater been so crammed with expert code breakers.

Much like “Inside the Box,” the narrative portion of “The Enigmatist” seems tacked on. Kwong’s account of “Colonel” George Fabyan, the eccentric millionaire who engaged top minds to scour Shakespeare’s plays for hidden messages that would prove his theory that Sir Francis Bacon was the true author, is fascinating but fuzzy,

But Kwong neatly plucks one theme from his story for savoring. He calls attention to an image of cryptographer lovebirds sharing their passion for decoding. He goes on to imagine that there might be some in his audience enjoying a “nerd date.”

There’s a coziness to these descriptions, which encourage an introverted community of brainy hobbyists to feel warmly connected and perhaps even a touch romantic. The production, guided by directing consultant Jennifer Chambers, establishes just the right moody atmosphere, part nightclub, part basement den.

If only the show were more tightly executed. For all Kwong’s astonishing powers of counting and calculation, he has a loose sense of theatrical time. “The Enigmatist” stretches on unduly — a slightly uncomfortable situation for an audience that has been masked for nearly two hours straight.

It was exciting to see him construct a crossword puzzle on the fly, but I wish that he had cut out some earlier business to make room for this finale of linguistic virtuosity. While meeting the formidable challenge, he mutters to himself with his back to the audience, like a straight A student cracking a tricky exam. From a theatrical perspective, the process is draggy. But the result is as breathtaking as a Houdini escape.

By far, the greatest feat in “The Enigmatist” is the feeling of togetherness that’s created in the audience. At the end of the show, the contents of a mysterious locked box are revealed. What’s inside doesn’t disappoint, but I was still marveling at the excellent company Kwong had conjured out of thin air.

Denial of responsibility! TechiLive.in is an automatic aggregator around the global media. All the content are available free on Internet. We have just arranged it in one platform for educational purpose only. In each content, the hyperlink to the primary source is specified. All trademarks belong to their rightful owners, all materials to their authors. If you are the owner of the content and do not want us to publish your materials on our website, please contact us by email – [email protected]. The content will be deleted within 24 hours.
createsEnigmatistentertainment newsEntertainment updateGeffenMagicalnews updatePlayhouse
Share