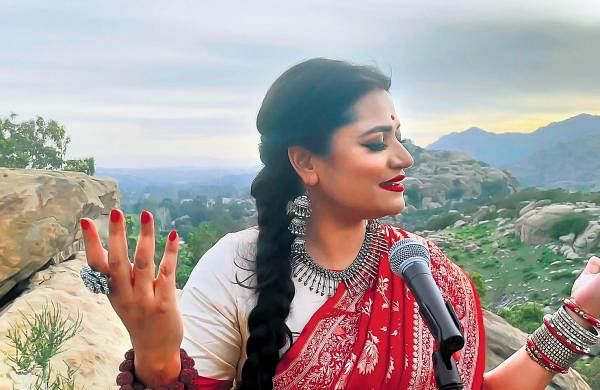 An ardent devotee of Lord Shiva, Suchismita always wanted to sing a devotional track. She began working on it way back in 2019, but the pandemic delayed its release by two years. “Since I believe that young people aren’t interested in devotional music, I was motivated to compose something edgy that would appeal to them,” she says.

The song is an amalgamation of Indian classical, modern hip-hop and EDM. Directed by Los Angeles-based JS Arts, the video brings to life the narrative of the track, which is devotion, ecstasy and abundance.
The hard part for Suchismita was finding a rapper since most rappers in the West do not write spiritual lyrics. After interviewing many of them, she found a match in Maya Miko who did the lyrics which describe Lord Shiva.

A Kolkatan, Suchismita studied Hindustani classical music under the Patiala gharana. She shot to fame after she premiered on national television alongside AR Rahman for a duet on ‘Jagao Mere Des Ko’ for MTV Coke Studio, India. Then came her first  Bollywood outing, working alongside Arijit Singh on the romantic number ‘Desi Romance’ for Shaadi Ke Side Effects. The vocalist has also contributed to other Bollywood projects such as Airlift, Jigariya, Tigers, Lakshmi and Ram Singh Charlie.

“Working as a sound designer while composing the sargam and tarana for the song ‘Ghar More Pardesiya’ (Kalank) and ‘Kabira’ (Yeh Jawaani Hai Deewani) counts as some of my most challenging projects,” she recalls. Mirzya, however, was the most memorable as it was her first song with Shankar Ehsaan Loy, and in a film by her favourite director, Rakeysh Omprakash Mehra, following which Hollywood composer Thomas Newman invited her to sing and co-write the score for the Golden Globe Award-nominated film The Best Exotic Marigold Hotel followed by its sequel The Second Best Exotic Marigold Hotel.

A passionate exponent of Indian classical music, Suchismita presents Indian ragas, thumris and ghazals. Javed Akhtar penned one of her noteworthy compositions, ‘Payal’, which earned her rave reviews. Her other single ‘Ek Lamha’, a romantic duet featuring Shankar Mahadevan, penned by Kaifi Azmi, earned her similar audience appreciation. Her recent single ‘Kinare’, which released in February this year, saw Suchismita fusing a traditional bandish with a tarana. “The song is dear to my heart, as it is based on my favourite raga Yaman,” she reveals.

The vocalist shuttles between Los Angeles and Mumbai owing to her keenness for the exploration of the western music market and her marriage to tech author Joyjeet Banerjee in 2020. She is now looking forward to the rest of year that is lined up with several singles.

Denial of responsibility! TechiLive.in is an automatic aggregator around the global media. All the content are available free on Internet. We have just arranged it in one platform for educational purpose only. In each content, the hyperlink to the primary source is specified. All trademarks belong to their rightful owners, all materials to their authors. If you are the owner of the content and do not want us to publish your materials on our website, please contact us by email – [email protected]. The content will be deleted within 24 hours.
Amalgamation of Indian Classical musicAR Rahman’s protégéDamaruentertainment newsEntertainment updategodmodern Hip-Hop and EDMnews update
Share

IPL 2022 | Rajasthan opt to field against RCB in Qualifier 2