Notice: amp_is_available was called incorrectly. `amp_is_available()` (or `amp_is_request()`, formerly `is_amp_endpoint()`) was called too early and so it will not work properly. WordPress is currently doing the `pre_get_posts` hook. Calling this function before the `wp` action means it will not have access to `WP_Query` and the queried object to determine if it is an AMP response, thus neither the `amp_skip_post()` filter nor the AMP enabled toggle will be considered. It appears the theme with slug `publisher` is responsible; please contact the author. Please see Debugging in WordPress for more information. (This message was added in version 2.0.0.) in /home/runcloud/webapps/techilive/wp-includes/functions.php on line 5313
 The life and art of Guru Dutt - TechiLive.in 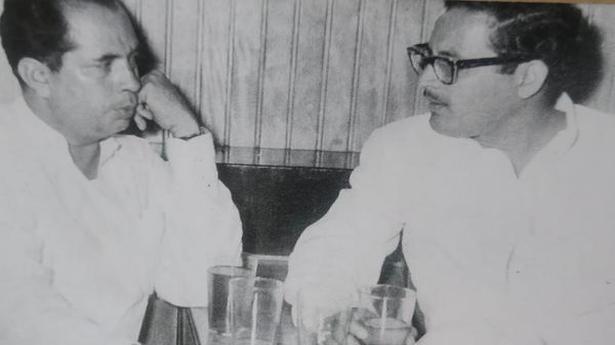 The life and art of Guru Dutt

As his debut film ‘Baazi’ turns 70 later this year, Bengaluru film historians weigh in with a city connection

Seventy years ago a genius was born with the release of Baazi (1951). The Dev Anand starrer is considered the first Bombay Noir and the film’s success birthed a sub-genre. The film also marked the directorial debut of Guru Dutt, who in his too-short career left behind an impressive body of work, including the holy trinity of Pyaasa (1957) Kaagaz Ke Phool (1959) and Sahib Bibi Aur Ghulam (1962).

Guru Dutt’s films continue to inspire filmmakers as much his troubled life fascinates biographers. The latest book on the filmmaker is television journalist, Yasser Usman’s Guru Dutt An Unfinished Story. While the accessible book is well researched and quotes extensively from books and interviews, film historians in Bengaluru wish his early days in the city including his birth in Malleshwaram was given due importance.

N Vidyashankar, Artistic Director of BIFFes, says, “His mother, Vasanthi Padukone wrote a book, My Son Guru Dutt, which is also available in Kannada as Nanna Maga Guru Dutt. The book gives his fans a deeper look at his early life and talks of his connection with Bengaluru, which is often ignored by film historians.”

Guru Dutt, who started off learning dance, was an excellent choreographer, Vidyashankar says. “Every frame is artistically arranged and there seems to a magical beauty in the manner in which the frames move and capture the mood and emotions of the characters on screen.”

Describing him as a true film man, Vidyashankar says, “Guru Dutt excelled in the craft. “He has a conscious understanding of the form and that became his strength. He was adept at expressing ideas and emotions metaphorically. The latter can be seen in the famous crucifixion shot in Pyaasa. He was an expert at independent thought within the framework of commercial cinema.”

Talking about the intensely personal Pyaasa, that explores the divide between art and commerce, HN Narahari Rao, President Fipresci India and Former Artistic Director of BIFFes (Bengaluru International Film Festival), says, “After commercial films such as Baazi, CID and Mr & Mrs 55, Guru Dutt moved into a different league with Pyaasa.

Dutt’s struggle with depression finds words in ‘Yeh duniya agar mil bhi jaye toh kya hai’? There are similarities between Guru Dutt and Karnataka’s Chitra Bramha (God of Films) Puttanna Kannagal. Both were disillusioned with materialism and brought out these aspects on the screen.”

Though now considered a cult film and a commercial success, Narahari says when Pyaasa was released in 1957, critics were not particularly appreciative. “Guru Dutt and cinematographer VK Murty’s play of light and shade created history in picturising songs. In my journey as a film jury member across festivals, Pyaasa is always on demand and the film has been screened at most festivals across the world.”

Loading...
Denial of responsibility! TechiLive.in is an automatic aggregator around the global media. All the content are available free on Internet. We have just arranged it in one platform for educational purpose only. In each content, the hyperlink to the primary source is specified. All trademarks belong to their rightful owners, all materials to their authors. If you are the owner of the content and do not want us to publish your materials on our website, please contact us by email – admin@techilive.in. The content will be deleted within 24 hours.
artDuttentertainment newsEntertainment updateGuruGuru Duttalifenews update
0
Share

Second wave: The link between Covid-19 variants and the spike — Explained