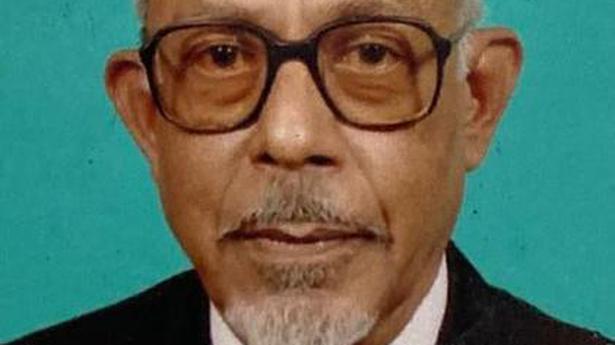 Dr Samuel Grubb, who passed away recently, has been conductor of the Madras Musical Association, member of the GATT Quintet that performed at the Sydney Olympics and sung for Ilaiyaraaja. But what he will be undoubtedly remembered for is his deep voice, one that American gospel queen, Mahalia Jackson, called ‘the Bottomless Bass’

I first met Dr Samuel Grubb in 1964 when he was chosen as the bass soloist for a cantata called ‘Redemption’ which my father had composed with the legendary Richard Singh. I was still a boy singing alto in the YMCA Augumented choir then and Grubb was at least a decade older. The concert was a grand success and the stand-out performer was Grubb.

Even though Grubb was a famous conductor later, he is still well known for his bass voice. Low G was a piece of cake. The GATT Quartet (then comprising Samuel Grubb — bass, Kalyan Subrahmanyam — 1st tenor, Allan Sathyadev — 2nd tenor, and James (Tony) Davids — 2nd tenor) was well known even when I was in college. GATT stood for Grubb, Allan, Tony and Theophilus (which was Kalyan’s middle name). When Kalyan joined medical college, I teamed up with him for our medical college gigs doing Simon and Garfunkel and a bit of Country. Kalyan introduced me to the GATT with me singing baritone, when Allan left for higher studies to the UK in 1974. People still called us the GATT so we let it ride. We rehearsed many times in my car as I drove ourselves to all our performances which were mainly in consulates for Christmas concerts and memorial services. Regular matinee concerts were held at Stella Maris College and Women’s Christian College. Grubb being the oldest was the unofficial leader of the GATT, and for 20 years we were a quartet till Allan rejoined in 1994. The quintet was now a group of three doctors, an aerospace engineer and a musician.

Born Samuel Grubb Dhanakaran Singh on March 12, 1940, in Pollachi to SR Sellaraj and Vadivammal, Grubb was the sixth of eight children. He schooled at Bain’s and Madras Christian College in Madras, did his pre-university at Pachaiyappa’s College and joined the Kilpauk Medical College for MBBS, topping it with a Diploma in Dermatology from the Madras Medical College. He was married to Pramila, an accomplished pianist and the couple has one son, Avinash Mario Grubb, who is the principal organist of St Marks Cathedral in Bangalore.

Incidentally Grubb’s cousin (though many years apart) was the famous Suvi Raj Grubb who was with All India Radio. He relocated to England to freelance with the BBC and later became a very sought-after recordist and record producer in England. During the 1960s, Suvi was recording in the Abbey Road Studios and might have had a stint with the Beatles although he was more of a classical recordist.

In 1971, gospel singer and one of the most influential voices of the 20th Century, Mahalia Jackson came to Madras and after a sell-out concert in the Music Academy, was relaxing at the Connemara hotel. Organ maestro Handel Manuel introduced the GATT to her and she would not let them stop singing. She was fascinated by Grubb’s voice and called him the “bottomless bass”.

This was also the time the GATT had started backing vocals for well-known singer Usha Iyer (later Usha Uthup). She took them to Bombay for a performance at the Shanmukanada Hall. The highlight — Grubb’s voice.

By the late 1970s we had all graduated but still GATT was priority. We could not do as many shows and gigs as we did as students but we did try to fit in a few. Some of the boys also lent their voices for film recordings at that time. Ilaiyaraaja asked Grubb to do the hit of the 1980s ‘Annae annae sippoy annae’ in Prabhu-starrer Kozhi Koovuthu. That was the only time Grubb sang for films saying he was not cut out for it.

Grubb lived in Libya for a while and when he returned, took over the baton of the Madras Musical Association as conductor in 1989. Grubb was elected the emeritus conductor of the MMA after his tenure ended. He had an uncanny sense of humour yet was a disciplinarian. I took over as president of the association in 1990 and it was a wonderful teamwork between us. Harmonising by his side will go down as one of the highlights of my life.

Although Kalyan had settled in Bahrain we travelled the world singing together. The International Church Music Festival in Coventry, England was a memorable one. So was the Chicago Gospel Festival at Grant Park, all on invitation. In 2000, we were invited to perform with a 1,000-voice choir for the Sydney Olympics torch relay ceremony and for a concert at the Sydney Opera House. We sang for the Delaware Jazz Festival, in Ireland, and for the Pope and at the Pantheon in Rome. Among our last concerts was one for Christmas 2018 at Emmanuel Methodist Church, Chennai, where Grubb had been conductor of the choir in the 1960s and ‘70s. The next day we performed at the Madras Gymkhana in what was to be GATT’s last outing.

Watching many young people take to music today, reminds me of a song Grubb always sang, “I see babies cry, I watch them grow, they’ll learn much more than I’ll ever know, and I think to myself what a wonderful world.”

Wonderful was the way Grubb saw it.

Dr Ravi Santosham is patron of the Madras Musical Association

Loading...
Denial of responsibility! TechiLive.in is an automatic aggregator around the global media. All the content are available free on Internet. We have just arranged it in one platform for educational purpose only. In each content, the hyperlink to the primary source is specified. All trademarks belong to their rightful owners, all materials to their authors. If you are the owner of the content and do not want us to publish your materials on our website, please contact us by email – [email protected]. The content will be deleted within 24 hours.
Allan SathyadevDr Kalyan SubrahmanyamDr Ravi SantoshamDr Samuel Grubbentertainment newsEntertainment updateGATTJames Davids
0
Share

U of South Carolina President Plagiarized Speech | Inside Higher Ed

In ‘minibrains,’ hindering key enzyme by different amounts has opposite growth effects