Notice: amp_is_available was called incorrectly. `amp_is_available()` (or `amp_is_request()`, formerly `is_amp_endpoint()`) was called too early and so it will not work properly. WordPress is currently doing the `pre_get_posts` hook. Calling this function before the `wp` action means it will not have access to `WP_Query` and the queried object to determine if it is an AMP response, thus neither the `amp_skip_post()` filter nor the AMP enabled toggle will be considered. It appears the theme with slug `publisher` is responsible; please contact the author. Please see Debugging in WordPress for more information. (This message was added in version 2.0.0.) in /home/runcloud/webapps/techilive/wp-includes/functions.php on line 5313
 The N.B.A. vs. the Coronavirus May Be the Toughest Playoff Matchup - TechiLive.in 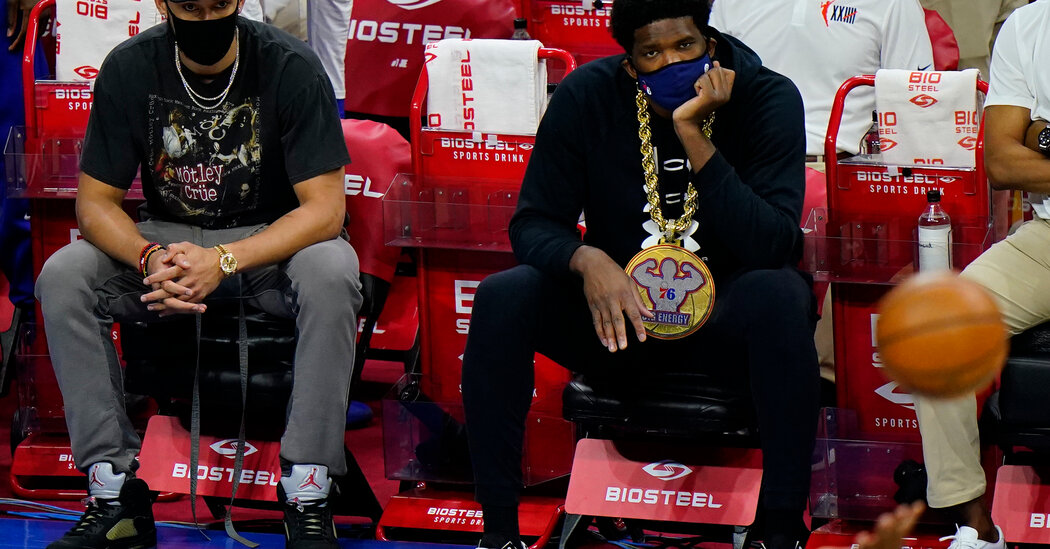 The N.B.A. vs. the Coronavirus May Be the Toughest Playoff Matchup

The N.B.A. planned for each of its 30 teams to play 72 games across 145 days this season, its 75th. Despite a rash of postponements and injuries to big-name stars, all 1,080 games were played in the throes of the coronavirus pandemic.

No one in the league office is celebrating yet.

“We knew it was going to be a challenge to get through all of the games in a way that we thought kept people safe, and we’re really happy to have done that,” said David Weiss, the N.B.A.’s senior vice president of player matters. “At the same time, the virus keeps changing, so what we have to do keeps changing.”

“No one knows everything about Covid,” Weiss added, “and so we’re always willing to revisit what we do.”

With the playoffs beginning Saturday, here are answers to some of the questions about where things stand with the N.B.A.’s health and safety rules related to the coronavirus.

How did the season go without a bubble?

League officials have maintained all season that they did not plan to return to a restricted-access bubble environment, like the one engineered last summer at Walt Disney World near Orlando, Fla. Numerous players said the isolation was harmful to their mental health, and Commissioner Adam Silver said in May 2020 that playing games without fans for an entire season could lower revenue by as much as 40 percent.

Without the bubble, and with limited or no fans in arenas, 31 games were postponed in December, January and February when teams could not meet the minimum requirement of eight players in uniform because of positive tests or contact tracing, as well as injuries. The league hadn’t postponed more than four games in one season over the past 20 years.

After getting through March, April and May with no postponements, six of the 16 teams in the playoffs are expected to have crowds of at least 10,000 in the first round, including the Knicks (with a league-high 15,000) and the Nets.

What will happen if a player tests positive for the coronavirus during the playoffs?

The N.B.A. does not announce whether a player has been sidelined because of a positive test or because of exposure to someone who has tested positive. In either case, the player will be out for a number of days based on his level of exposure, often a week or more. (Unless he is vaccinated; see below.) This is the same policy from the regular season.

A real-time illustration played out on Tuesday, hours before the Indiana Pacers hosted the Charlotte Hornets in the opening game of the play-in tournament. The Pacers’ Caris LeVert was ruled out for 10 to 14 days because of the N.B.A.’s health and safety protocols.

Of the nearly 550 players who appeared in at least one game this season, 167 spent time in the league’s health and safety protocols, according to data maintained by Fansure.

“We’re optimistic that what we’ve been doing will work, but we certainly can’t relax because it’s the playoffs,” Weiss said. “We have to emphasize that it’s important to keep following the protocols and getting vaccinated.”

Is the N.B.A. worried about marquee players missing playoff games because of the virus?

“That’s of course one of the things that we’re worried about, and it’s why we’ve first and foremost been pushing that everyone educate themselves on vaccination and its benefits, hoping that people decide to get vaccinated,” Weiss said.

Breakthrough cases, in which a person tests positive for the virus after vaccination, are another source of anxiety. They are rare, but the Yankees recently had nine such cases, and the N.B.A. is not immune. Golden State’s Damion Lee publicly acknowledged testing positive after getting vaccinated.

“Vaccines aren’t perfect, and that was expected,” Weiss said. “We’ll have to manage those cases when they come up. We also have to — like a lot of society is doing — recognize that vaccines and declining case rates are the path back to normalcy. But we can’t limit people’s entire lives. We’ve got to find a balance where we’re recognizing the stress and the mental health challenges from this season and try to get back to normal.”

Further coronavirus disruptions seem inevitable over the next two months, but Silver has said for months that he would not push to make vaccinations mandatory.

How many players have been vaccinated?

In an April interview with Time magazine, Silver said that “more than 70 percent of our players have received at least one shot.”

That figure has risen to nearly 80 percent for players and staff with full access to players, the league confirmed. The limit for team traveling parties was increased to 48 people for the playoffs, with a traveling team doctor now mandatory.

Are the protocols different for the playoffs?

League and union officials have discussed modifying some of the protocols after the Centers for Disease Control and Prevention said recently that people who are fully vaccinated — meaning two weeks removed from their second or only shot — no longer need to wear masks or distance themselves when outdoors or in most indoor settings.

But the league’s rules haven’t changed much since March 17. In that round of updates, players were notified that some restrictions would be relaxed for fully vaccinated individuals and for teams with 85 percent vaccination rates among players and certain personnel.

Among the rules eased two months ago:

How are players doing after testing positive?

Jayson Tatum, the Boston Celtics star, scored 50 points on Tuesday night in Boston’s victory over Washington in a play-in game, which secured a playoff berth for the Celtics and a first-round showdown with the Nets. Yet Tatum has also been open about needing to use an inhaler before games because of fatigue and breathing difficulties he has dealt with since testing positive for the coronavirus in January.

Evan Fournier, Tatum’s teammate, said this month that his vision and depth perception were still diminished after he contracted the virus in April. He likened the way “bright lights were bothering my eyes” to a concussion.

Portland’s Nassir Little told The Athletic in December that he lost 20 pounds and was in “miserable pain” after his bout with the virus. Milwaukee’s Jrue Holiday told The New York Times recently that he needed “three or four weeks” to restore his conditioning to its usual level after spending nearly two weeks recuperating in his basement.

“The actual effects on my body were not fun,” Holiday said.

Uncertainty about the effects of the coronavirus on the heart has also been a constant source of concern throughout the sports world. Every N.B.A. player who tests positive is given an extensive cardiac exam before returning to basketball activity, but the medical community’s understanding of the coronavirus and its potential long-term impact is still evolving because the virus is so new.

In the Time interview, Silver said the prospect of down-the-road difficulties for players who tested positive “absolutely worries me,” but he added: “Based on the information we have today, I still believe that what we’ve done has only allowed them to live safer and healthier lives.”

Denial of responsibility! TechiLive.in is an automatic aggregator around the global media. All the content are available free on Internet. We have just arranged it in one platform for educational purpose only. In each content, the hyperlink to the primary source is specified. All trademarks belong to their rightful owners, all materials to their authors. If you are the owner of the content and do not want us to publish your materials on our website, please contact us by email – admin@techilive.in. The content will be deleted within 24 hours.
Loading...
coronavirusmatchupNBAnews updateplayoffsports newssports updatetechi live
0
Share