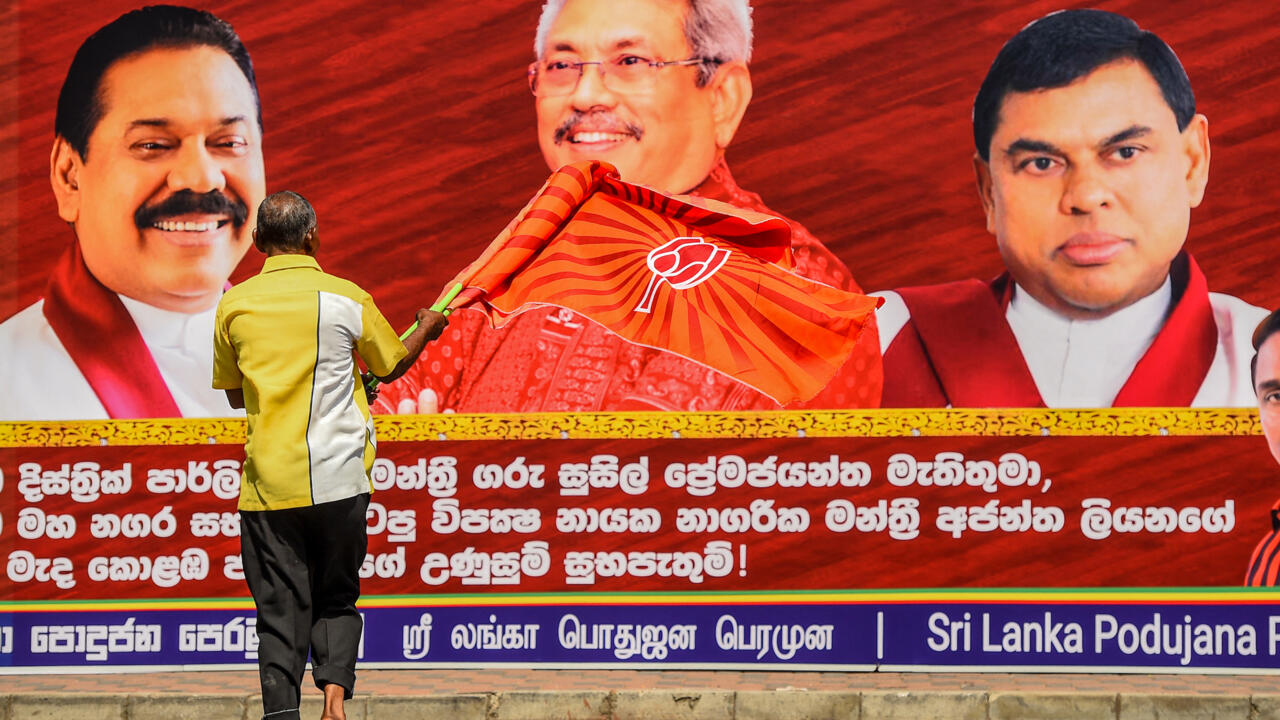 At the height of their power, four brothers from Sri Lanka’s Rajapaksa dynasty held the presidency and the prime minister’s office as well as the finance, interior and defence portfolios, among others. But just when the Rajapaksa clan seemed invincible, an economic crisis of their own making led to their undoing. But does that spell the end of South Asia’s most powerful political family?

On August 12, 2020, an extraordinary display of family power was under way at the Temple of the Sacred Tooth, one of the most sacred Buddhist sites in Sri Lanka, in the central city of Kandy, the political capital of ancient kings in the island nation.

Following a landslide victory in August elections, Sri Lankan President Gotabaya Rajapaksa swore in a cabinet that included two of his brothers and two nephews, sharing multiple portfolios among the family.

The Rajapaksas have a tradition of temple swearing-in ceremonies, a symbolism-heavy acknowledgment of the Sinhala Buddhist populism that kept propelling them into power. Over the past few years, as the family’s political fortunes enlarged, the investiture entourage of officials, diplomats and media teams dutifully trekked to sacred temples on historic sites, where yet another Rajapaksa was granted yet another portfolio.

The concentration of power and mismanagement though, have been unholy.

At the inauguration of the new cabinet, the president took on the defence portfolio, contravening a constitutional amendment barring the country’s head of state from holding a cabinet post.

The president then swore in his eldest brother, Chamal Rajapaksa, as minister for irrigation, internal security, home affairs and disaster management. Chamal’s son Sashindra was made junior minister for high-tech agriculture. The prime minister’s son Namal became minister of youth and sports.

Barely a year later, Basil Rajapaksa was named finance minister, taking over the important portfolio from his brother, the prime minister.

At the height of their power, the Rajapaksas appeared invincible as they signed mega infrastructure contracts and amassed fortunes while cracking down on minorities and journalists – and successfully evaded accountability in a state where they held all the reins.

For several years, human rights defenders condemned the reprisals, massacres, crackdowns, corruption and cronyism of South Asia’s most powerful political dynasty. Their calls went unheeded by an electorate willing to overlook assaults on liberties and persuaded by the cult of strong leaders preferring action over compromise.

But that was before the island nation descended into its worst economic crisis since its independence from Britain in 1948. As an acute foreign currency crisis sparked fuel shortages, power cuts and spiraling inflation, the tide finally began to turn against the Rajapaksa clan as Sri Lankans struggled to cope with a disaster of their elected government’s own making.

This week, as peaceful anti-government protests turned violent, symbols of the Rajapaksa family power came under attack in scenes unimaginable two years ago.

On Monday night, crowds stormed the prime minister’s official Temple Trees residence in Colombo, forcing the army to conduct a predawn operation to rescue Mahinda Rajapaksa and his family. The prime minister by then had already submitted his resignation letter to his younger brother, the president, clearing the way for a “new unity government”.

Meanwhile in the southern province of Hambantota, mobs attacked the Rajapaksa Museum in the family’s ancestral village of Medamulana. Two wax statues of the Rajapaksa parents were flattened and mobs trashed the building as well as the ancestral Rajapaksa home nearby.

It was a violent assault on a clan that has held feudal power since colonial times and has used patronage and privilege to rise from local to national power, placing family members in strategic positions along the way.

From rural roots to national power

The Rajapaksas are a rural land-owning family from southern Sri Lanka whose ancestors have represented their native Hambantota on state and regional councils since pre-independence days.

Prominent families have always played an important role in Sri Lankan politics. But the Rajapaksas were not part of the urban political elites in the decades following independence. While families such as the Bandaranaikes – which produced three Sri Lankan prime ministers and one president – dominated the national scene, the Rajapaksas were part of the rural elites in the country’s Sinhalese Buddhist southern heartland.

The current president’s father, D. A. Rajapaksa, was a parliamentarian representing Hambantota district. But it was his second son, Mahinda, who catapulted the clan into national dominance when he rose from opposition leader in parliament to prime minister in 2004.

A year later, Mahinda won the 2005 presidential poll with a narrow margin, aided, according to his opponents, by a call for an election boycott by the LTTE (Liberation Tigers of Tamil Eelam), a militant group better known as the Tamil Tigers.

It was Mahinda’s first win in the bloody fight against the Tamil Tigers based in Sri Lanka’s neglected north, home to the country’s Tamil minority.

As president, Mahinda initiated a pattern of leadership that would serve his family’s political fortunes, earning him the moniker of “clan leader” of the rising Rajapaksas.

The transition from a rules-based order to one of family networks began shortly after the 2005 presidential inauguration when, according to family lore, Mahinda emerged from the investiture room and spotted his younger brother, Gotabaya.

A former army officer, Gotabaya had moved to the US only to return home ahead of the 2005 to work on his brother’s election campaign.

According to biographers, the new president tapped Gotabaya’s shoulder and told his brother – who had left the army as a lieutenant colonel – that he was going to be Sri Lanka’s new defence secretary.

The Rajapaksa’s consolidation with the military had begun. It wasn’t long before Mahinda was ready to unleash a war that would “end” the Tamil Tigers, as he promised his electorate.

By the time Mahinda was elected president, the Tamil Tigers had dropped their demands for an independent state in the north and were asking for greater autonomy under the terms of a Norway-sponsored ceasefire.

The agreement, it was hoped, would usher in a peace deal that would end a brutal civil war that had killed tens of thousands of people over two decades.

The Rajapaksa brothers instead oversaw a military operation that would defeat the Tamil Tigers, earning the support of Sri Lankans eager to end the civil war. But for the country’s Tamil minority, it unleashed a period of state violence against civilians that drew condemnations from the UN and international human rights groups over the abductions and disappearances of suspected Tamil Tiger supporters as well as “journalists, activists, and others deemed to be political opponents” by “armed men operating in white vans, which became a symbol of political terror”.

Gotabaya was particularly implicated in the infamous 2009 “White Flag Incident” when Tamil Tiger members and their families, after contacting the UN, Red Cross and other Western governments, agreed to surrender to Sri Lankan authorities only to be gunned down by the army.

The Rajapaksa brothers have repeatedly denied responsibility for the disappearances. They also maintain that they did not give the shoot-to-kill order during the “White Flag” surrender.

Falling into the ‘Chinese debt trap’

Gotabaya’s tough on security position boosted his popularity in the 2019 presidential polls just as it helped his politically more experienced brother, Mahinda, win parliamentary elections the next year.

But it was economics, not security, that proved to be the Rajapaksa clan’s undoing.

The Rajapaksas were also increasing their reliance on Chinese investment. A massive port project in the family’s native Hambantota soon emerged as a textbook example of the “Chinese debt trap”, with Sri Lanka borrowing from Chinese banks to pay for commercially unviable projects at onerous rates.

Chinese investments in a number of unfeasible mega projects, mostly in Hambantota, are the subject of numerous economic reports, with analysts apportioning blame to different parties. But in the real world, there was no doubt that life was getting increasingly difficult for Sri Lankan citizens.

As the country’s sovereign debt ballooned, the Rajapaksas resisted national and international calls for an International Monetary Fund (IMF) agreement and debt restructuring, insisting that Sri Lanka would service its debt.

Meanwhile, Basil Rajapaksa, who was made finance minister in 2020 despite the corruption cases against him, was dubbed “Mr. Ten Percent” as allegations circulated that the family was siphoning off state funds.

His nephew, Chamal Rajapaksa’s son Sashindra, was involved in a disastrous ban on chemical fertiliser imports, which hit the country’s critical agricultural sector.

As the pandemic shut down tourism, Sri Lankans began to despair of their country’s ruling clan.

On May 9, when Rajapaksa supporters attacked peaceful protesters assembled in Colombo, the floodgates of rage against the powerful political dynasty opened.

A day after the deadly violence, Mahinda’s son Namal, who was sports minister before his resignation earlier this year, insisted the family was merely going through a “bad patch”.

At 36, Namal is widely seen as the primary Rajapaksa successor, and he has a vested interest in downplaying the troubles the family is facing.

But analysts familiar with Sri Lanka’s culture of dynastic patronage are not yet willing to write off the Rajapaksas as a political force. “The Rajapaksa brand still has support amongst the Sinhalese population,” Akhil Bery from the Asia Society Policy Institute told AFP.

“Though much of the blame can be placed on the Rajapaksas now, their successors will inherit the mess, leaving space for the Rajapaksas to remain politically relevant.”

Denial of responsibility! TechiLive.in is an automatic aggregator around the global media. All the content are available free on Internet. We have just arranged it in one platform for educational purpose only. In each content, the hyperlink to the primary source is specified. All trademarks belong to their rightful owners, all materials to their authors. If you are the owner of the content and do not want us to publish your materials on our website, please contact us by email – [email protected]. The content will be deleted within 24 hours.
Asia / Pacificbroughtdynastyeconomic crisisFallFeaturesGotabaya RajapaksaHealth news
Share