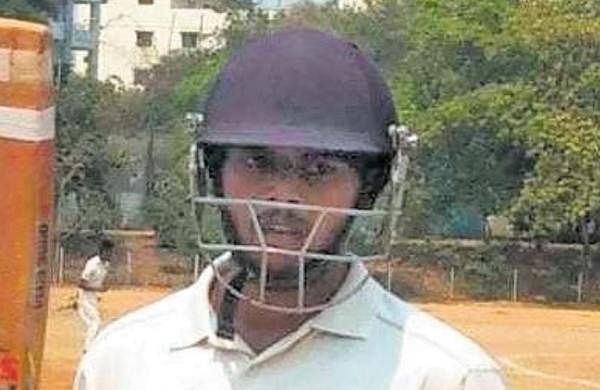 KHAMMAM: While most youngsters dream of having a stable day job with a decent pay, 20-year-old Anipeddi Jairam Kasyap, hailing from Chandrupatla village under Kallur mandal in Khammam district, has set his eyes on cracking into the Indian cricket team.

He is right now focused on entering the national T-20 team with the confidence attained by playing in the Under-19 tournament in Jammu & Kashmir a few days ago. Jairam Kasyap has already become a sensation among sports circles with his amazing skills. An undergraduate second year student, Kasyap says that his dream is to represent the nation one day.

Inspired by his father AVD Prasad Sharma who was a national level kabaddi player, Kasyap started dreaming of becoming an athlete from a very tender age itself. Jairam Kasyap developed an interest in cricket while practising seriously to become a badminton or kabaddi player in Khammam.

With the excellent guidance from coach N Raj Kumar, Kasyap understood that he would be able to provide wings to his dreams one day. An all-rounder on the field, Kasyap is known as a fearsome fast bowler as well. He has also won a blue belt in karate.

In a brief conversation with The New Indian Express, he said that his biggest dream was to represent the nation one day and make everyone proud.

Inspired by his father AVD Prasad Sharma, who was a national level kabaddi player, Kasyap started dreaming of becoming an athlete from childhood itself. While appearing for a league in 2020, ahead of the Under-19 selections, he showcased amazing an performance and scored 136, 110, 144 and 154 runs

Denial of responsibility! TechiLive.in is an automatic aggregator around the global media. All the content are available free on Internet. We have just arranged it in one platform for educational purpose only. In each content, the hyperlink to the primary source is specified. All trademarks belong to their rightful owners, all materials to their authors. If you are the owner of the content and do not want us to publish your materials on our website, please contact us by email – [email protected]. The content will be deleted within 24 hours.
AnipeddiAnipeddi Jairam KasyapAVD Prasad SharmaChandrupatla villageJairamKasyapnews updatesports news
Share

Leena Jumani talks about her journey from stocks to acting