Notice: amp_is_available was called incorrectly. `amp_is_available()` (or `amp_is_request()`, formerly `is_amp_endpoint()`) was called too early and so it will not work properly. WordPress is currently doing the `pre_get_posts` hook. Calling this function before the `wp` action means it will not have access to `WP_Query` and the queried object to determine if it is an AMP response, thus neither the `amp_skip_post()` filter nor the AMP enabled toggle will be considered. It appears the theme with slug `publisher` is responsible; please contact the author. Please see Debugging in WordPress for more information. (This message was added in version 2.0.0.) in /home/runcloud/webapps/techilive/wp-includes/functions.php on line 5313
 The War of the Weary - TechiLive.in 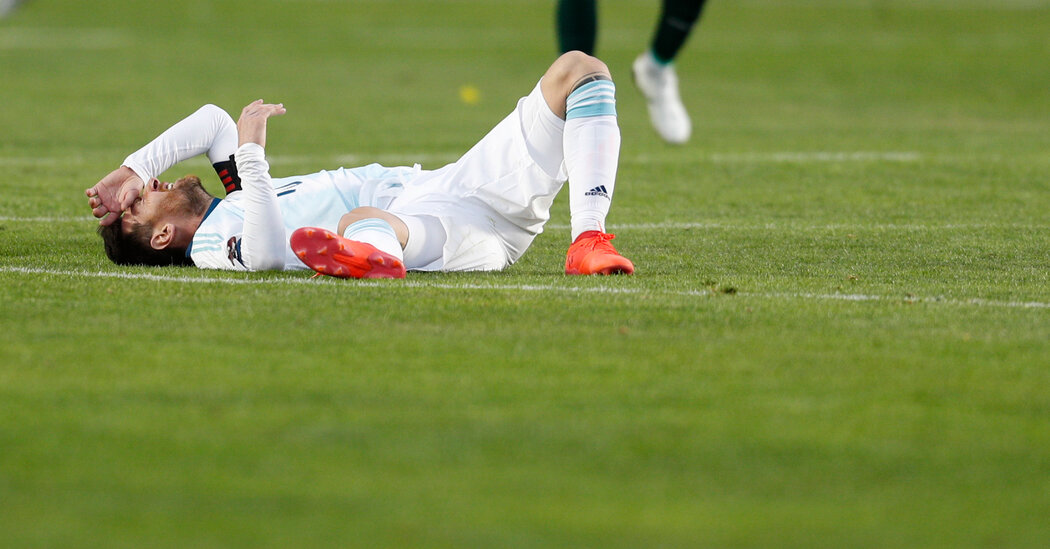 The War of the Weary

LONDON — A couple of weeks ago, as the players who will represent Wales in this summer’s European soccer championships started to report for duty, their coaching staff instituted an unwritten rule: Try, if at all possible, not to mention the F word.

It is not that the word is expressly forbidden; more discouraged. “We don’t want it to be a factor going in,” said Tony Strudwick, the team’s head of performance. “We haven’t used the term. We are not talking about fatigue.”

Discussing it in public might look like making excuses. Talking about it in private might sow doubt in the players. That does not mean, of course, that Strudwick and his colleagues — and every other top team in the world facing a championship-filled summer — are not thinking about it almost constantly.

Fatigue is always a factor in a major tournament. The European Championship and the Copa América and the World Cup arrive at the tail end of long and arduous club campaigns. They are contested by the most successful players, the ones employed by the finest club teams, who are rarely afforded more than a couple of weeks off before reporting for international duty.

But rarely has the shadow of exhaustion hung so low over a tournament as it does this summer, which arrives in a calendar compacted and condensed by the effects of the coronavirus pandemic. In most countries, what is ordinarily a 10-month season was this year crammed into only a little more than eight.

Many of the players involved in the Euros — and the concurrent Copa América, the South American championship — have effectively been playing nonstop since last June. Some are starting to feel it. Marcos Llorente, the hard-running Spain midfielder, confessed earlier this month that, in his final few games of the season with Atlético Madrid, he came off the field unable to run any further. “The brain wanted more, but the body said no,” he said.

Didier Deschamps, coach of France, the world champion, was warning three months ago that his star-studded squad — a favorite to win the European title — was vulnerable to both physical and mental fatigue. His priority, he said upon gathering his team together late last month, was to ensure that there was enough “gas in the engine” to survive a schedule that — if all goes according to his plan — will encompass seven games in 30 days.

Gareth Southgate, the England manager, has admitted that he has to be careful not to “break any of these players.” Roberto Martínez, the coach of Belgium, the world’s top-ranked team, suggested after his side was held to a draw by Greece in a tuneup game that his players were struggling to rediscover the “competitive intensity” they would require to fulfill their ambitions in the tournament.

And while Strudwick and his Wales colleagues might not be talking about it, fatigue and its threat are laced into the very fabric of their planning. They have designed their training programs to take it into account. They have scheduled more down time to prevent it. Any players deemed to be pushing too close to their limits will find their training regimens monitored, their workloads reduced.

They and the other coaches all know that, more than ever, the outcome of Euro 2020 may not depend on the strategic or the stylistic, the tactical or the technical. It may, instead, hinge on the physical, what Strudwick called the battle of “freshness versus fatigue.” This is a tournament for the last team standing.

The explanation for that is obvious. The players called up by the 24 nations who will contest the postponed tournament have not, according to data from Twenty First Group, a soccer analytics consultancy, spent more time on the field over the last season on average than they might have done in ordinary circumstances.

But they all have played more games in a shorter space of time — Twenty First Group’s study showed that some will go into the tournament having played more than 200 minutes, or more than three games, more than their equivalents at the 2018 World Cup — and, just as significant, did so with far less time to recover.

Before the last European Championship, in 2016, players had enjoyed an average of 4.5 days of rest between games. This time, that figure is down to 3.9 days, according to the study. For some of the major nations, the figures are more striking still: The players representing Spain, France, England and Italy have had, on average, only 3.5 days between matches this season.

To Strudwick, though, that is only part of the story. As leagues and governing bodies scrambled to make up ground lost to the first wave of the pandemic, there was little or no break between the end of the 2019-20 season and the start of the 2020-21 edition. In some cases, it extended no longer than a couple of weeks.

“There was barely any time off,” Strudwick said. “Normally there is a season, an international break, a split in the middle, and then you go again. This time, it was just a small break, and then into the next season, with games every three or four days and highly dense international periods.”

Quite what effect that will have is not easy to predict. An initial reading would suggest that, more than anyone else, England is vulnerable to the effects of fatigue. The members of its squad have played more minutes than anyone else this season: an average of 3,700, or 40 games — eight entire fixtures more than the average player at the Euros.

That can be attributed to the Premier League’s decision not to follow the rest of Europe in allowing teams to use five substitutes this season. It is no coincidence that five of the six players who have seen the most action this year play in England’s top flight (though the overall leader, the Netherlands midfielder Frenkie De Jong, plays for Barcelona in Spain.)

But its effects may be offset by the fact that only one nation in the field — Turkey — has called up a younger squad than Southgate’s team. England may be just a little more susceptible to fatigue than France, Portugal and Germany, but its team is also significantly younger. Belgium, by contrast, has among the most experienced squads at the tournament, but far fewer recent miles in its legs.

It is possible, though, that fatigue — of a sort that disproportionately affects the traditional favorites — might act as a great equalizer; the fact that so many of the major stars are running on fumes may serve to make the tournament more exciting, rather than less.

That, certainly, is Strudwick’s reasoning. “It won’t go to form,” he said. “There will be upsets. It could be on the cards for a less-heralded team. It is going to be whoever utilizes their squad, maintains freshness, and navigates it best.”

Strudwick is not a dispassionate observer, of course. Wales, for one, has reason to hope that he is right. Its squad has only a couple of standout performers — Gareth Bale and Aaron Ramsey — but neither played as much as they would have liked this season. Neither Bale (for Tottenham) nor Ramsey (for Juventus) passed 1,500 minutes of competitive action for their clubs. Both should, in theory, be rather more fresh than usual.

There is, however, another potential problem in all those heavy workloads: not that the physical condition of the players will serve to make the tournament more open, but that it will make it more dangerous.

“There is a proven correlation between injury prevalence and lack of recovery,” said Jonas Baer-Hoffmann, the General Secretary of FIFPro, the global players’ union.

“This season some top players played up to 80 percent of their matches without the ideal time to recover,” he added. “We have already seen the impact of certain types of injuries typical for fatigue. Of course, we hope the players stay healthy, and can play at their very best. But after a year like we have had, the reality is that the risk for injuries is high.”

That is what Strudwick and all of his peers and contemporaries and rivals fear the most. It is what they have spent weeks and months trying to prevent, or at least to mitigate. They may not be talking about fatigue, and all the threats it poses, but they will certainly be thinking about it, every day for the next month, until only one of them is left standing, and at last they can rest.

Loading...
Denial of responsibility! TechiLive.in is an automatic aggregator around the global media. All the content are available free on Internet. We have just arranged it in one platform for educational purpose only. In each content, the hyperlink to the primary source is specified. All trademarks belong to their rightful owners, all materials to their authors. If you are the owner of the content and do not want us to publish your materials on our website, please contact us by email – admin@techilive.in. The content will be deleted within 24 hours.
news updatesports newssports updatetechi liveWarWeary
0
Share

Battlefield 2042: Check out the trailer and everything else you need to know | Digit

Chipotle will increase its menu prices as labor costs rise.