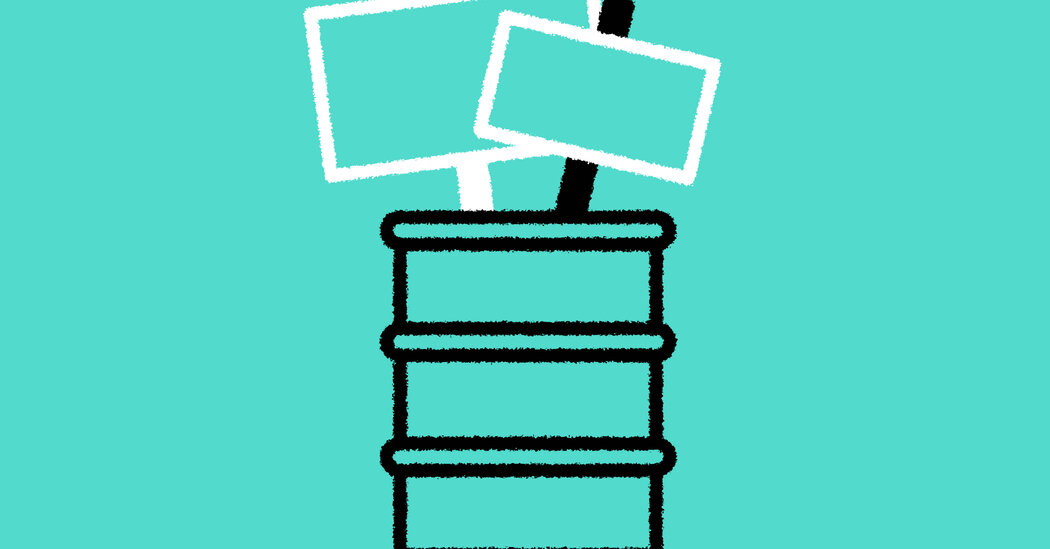 Good morning and happy Memorial Day weekend. Here are the biggest stories in business and tech to know for the (short) week ahead. — Charlotte Cowles

A Blow to Big Oil

Exxon Mobil suffered a surprising defeat when climate activist investors won at least two seats on its 12-member board on Wednesday. The investors are part of a small new hedge fund called Engine No. 1 that aims to push companies toward green initiatives and away from fossil fuels. Its campaign faces a steep uphill battle in the energy industry, but this recent victory could galvanize more Wall Street investment firms to confront climate change. Adding to the momentum, a Dutch court ruled that Royal Dutch Shell, Europe’s largest oil company, isn’t working fast enough to reduce greenhouse gas emissions and must redouble its efforts.

For the past three weeks, Apple vigorously (and expensively) defended itself in federal court against an antitrust lawsuit brought by Epic Games, the maker of the popular video game Fortnite. The case focused on whether Apple abused its market power by taking a 30 percent commission on sales from its iPhone App Store — and by punishing Epic when it tried to circumvent Apple and sell Fortnite’s in-app purchases directly to customers. The ruling is now in the hands of the judge, who said she hopes to reach a verdict by August. If Apple loses, it could fuel more antitrust cases against Big Tech.

Metro-Goldwyn-Mayer, the 97-year-old film and television studio that once epitomized a golden era of Hollywood, has sold itself to today’s epitome of modern commerce: Amazon. Many of MGM’s classics were sold off years ago, but it does bring one famous franchise — James Bond — that will give Amazon a new edge against streaming competitors like Netflix, HBO Max and Apple TV+. That edge cost Amazon $8.45 billion, about 40 percent more than other prospective buyers, including Apple and Comcast, were willing to pay.

Google is teaming up with the hospital chain HCA Healthcare to develop algorithms for patient care by mining health records. The algorithms are meant to improve patient monitoring, guide doctors’ decisions for better outcomes, streamline operations and even develop new treatments. But, of course, progress comes at a cost: patient privacy. HCA said that its patient records would be stripped of identifying information before Google data scientists gained access to them. But the terms of the deal were not publicly disclosed.

President Biden proposed a $6 trillion budget for the fiscal year 2022 that includes a map of long-term investments in his administration’s economic priorities — like infrastructure, education and green energy — over the next decade. The proposal, which is more of a wish list at this point, would take the United States to its highest sustained levels of federal spending since World War II. Mr. Biden has said he will pay for his agenda by raising taxes on corporations and high earners, but the plan also projects high budget deficits for at least a decade. The budget foresees unemployment hovering below 4 percent and inflation remaining stable.

On the Road Again

Treasury Secretary Janet Yellen will meet with the Group of 7 finance ministers in London later this week to discuss the nations’ next steps in the global economic recovery. On the docket: supporting international vaccine access and distribution, improving public health to prevent future pandemics and building more climate-friendly economies. Ms. Yellen has a similar agenda at home, and it’s a handful. Before her departure, she asked for more Treasury funding to oversee several key efforts in the U.S. economic recovery.

Loading...
Denial of responsibility! TechiLive.in is an automatic aggregator around the global media. All the content are available free on Internet. We have just arranged it in one platform for educational purpose only. In each content, the hyperlink to the primary source is specified. All trademarks belong to their rightful owners, all materials to their authors. If you are the owner of the content and do not want us to publish your materials on our website, please contact us by email – [email protected]. The content will be deleted within 24 hours.
BidensbigBudgetBusinessEducation newsEducation updatenews updatetechi live
0
Share

Class 12 Board exams: Ficci for cancelling 12th exams due to Covid situation