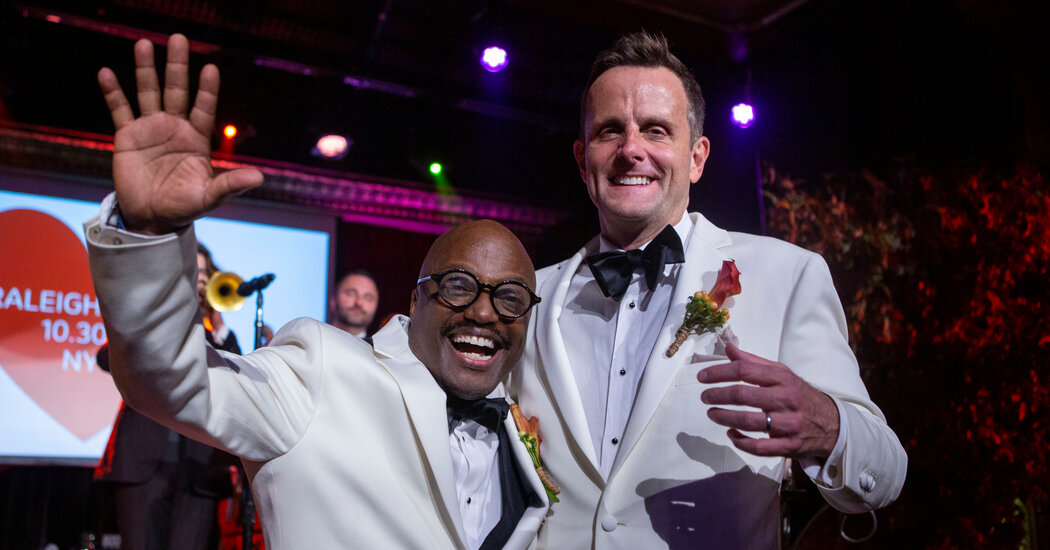 They Shared a Cab Ride, Then a Life Together

David Raleigh had been having trouble hailing cabs when he shoved Rick Bahl into the back of one at the end of their first date in 1995.

“I don’t know if you remember,” Mr. Raleigh said, “but it was extremely difficult for Black people to get a taxi in New York City back then.”

Mr. Bahl, who is white, had volunteered to flag one down for him. When it stopped in front of the TriBeCa restaurant where they had met for dinner, Mr. Bahl expected to wave Mr. Raleigh off and climb into a taxi of his own. Instead, Mr. Raleigh pushed him in, scooched in beside him and told the driver, “19th and 10th, please,” which was his place, leaving Mr. Bahl to wonder what he had gotten himself into.

Mr. Raleigh, 62, is a singer and pianist who tours internationally and has been a regular performer at New York City nightclubs. Mr. Bahl, 58, is the head of talent acquisition at Williams Lea, a provider of support services to businesses.

The two met on Halloween night in 1995 at the Barracuda, a bar in Chelsea. Mr. Raleigh was looking for friends he had arranged to meet when he spotted Mr. Bahl and his roommate, Olivier Pezeron, at a table across the room. “I thought he was cute and decided to send him a beer,” Mr. Raleigh said. By the time it was delivered, he had given up on finding his friends and was headed toward the Barracuda’s exit. Mr. Bahl stopped him. They talked until the bar closed then exchanged numbers.

But only one of them left the bar love struck.

“That would have been David,” said their longtime friend Susanna Herlitz-Ferguson. “Ricky is, let’s call it, the voice of reason. David is more of a dreamy, go-big kind of person.”

Mr. Bahl grew up in Racine, Wis., the youngest of seven siblings. His father, Donald Bahl, who turned 100 in October, was a Navy commander. His mother, Doloris Bahl, was a stay-at-home parent; she died in 2001 of colon cancer. He earned a bachelor’s degree in textiles at the University of Minnesota in 1986, then took a job with Sam Goody, the record store chain, as a product manager. Though he had hoped for a career in fashion, Sam Goody was the most expedient way of getting to New York.

“They relocated me,” he said. “I had always wanted to live here. I was the kid who, in junior high, had New Yorker cartoons and Bloomingdale’s bags on my walls.”

Mr. Raleigh’s journey to New York came with more twists. His mother, Mamie Raleigh, was a single parent. When Mr. Raleigh was 4, she moved him to Kings Garden, a religious community near Seattle. “My mom was working as a nurse in Rochester, N.Y., when she found Jesus and heard about this Christian commune in Washington,” he said. “She wrote them letters asking if she could be a nurse in their nursing home.”

By the time he was 13, he was singing and playing piano in church. In 1978, he left for San Francisco to attend Simpson Bible College, now known as Simpson University, and dropped out after being offered a record deal at the end of his freshman year. “Totally Psyched,” his first record, came out in the summer of 1979. He stayed in the city playing music a few years, then moved to Orange County, Calif., where his life changed after a performance at Ron’s in Laguna.

In 1986, after audience members from New York told him he was living on the wrong coast, “I picked up and moved,” he said. Bookings at prestigious clubs came quickly. By the late-1980s, he was a regular at the Rainbow Room, playing what is now a signature mix of standards and originals. In 1990, he went on the TV talent show “Star Search.”

By the time he met Mr. Bahl, his New York social life was thriving. “I was out nearly every night performing and meeting people,” he said. But he wasn’t having much luck in the romance department. As a boyfriend, Mr. Bahl was more experienced.

“I had dated one guy a year, and another guy a year and a half,” he said. “David never had anything long term.”

After the 1995 encounter at the Barracuda, Mr. Raleigh wanted that to change. He liked everything about Mr. Bahl, including the scraps of bandanna he had sewn into the rips in his jeans. But after a few weeks of trying to reach him by phone for a date and getting no answer, Mr. Raleigh started losing hope. A pair of women friends who were visiting New York from Germany told him he needed to step up his campaign.

Mr. Raleigh did as he was told. The next night, Nov. 21, Mr. Bahl was shoved into the cab in TriBeCa after their first date.

“He hasn’t left me since,” Mr. Raleigh said. Two and a half decades and three co-owned Manhattan apartments later — the two now live in Greenwich Village — they have never broken up.

“Guys often ask us, how the hell has this lasted 26 years?” he said. “Part of it is that I was 33 and he was 36 when we met. We had sown our wild oats. But a bigger part of it is that, in the gay world, there’s always someone brighter and shinier. And we’ve found that the guys who go off with someone shinier are never happier.”

Mr. Raleigh said their differing anger-management skills factor in: “Rick keeps a tally of little things that make him angry, like if you put the knife in the wrong place,” he said. “I fly off the handle and scream. The next day I can’t remember what made me mad.”

Should Mr. Bahl start to seethe, Mr. Raleigh has a strategy. “Rick doesn’t like to carry anything in his pockets, because he wants his pants line to stay beautiful. So I carry his keys and his wallet for him. Then when he gets angry and stomps off, he realizes I have the keys and he’s not going anywhere.”

Even if Mr. Bahl could go somewhere, he has never really wanted to. “David is the person other people always want to hang out with, whether it’s sitting around watching ‘The Golden Girls’ or going out to bars,” he said. “He is the best company.” On a deeper level, “he’s just a really good human being.”

When Mamie Raleigh died of a heart attack in 2016, Mr. Raleigh and Mr. Bahl grieved jointly. Accepting her son’s sexuality had been difficult for Ms. Raleigh. “She was very, very religious, and she struggled with what people would say,” Mr. Raleigh said.

She grew to love Mr. Bahl like a second son and her death gutted Mr. Raleigh. “When you see someone respond in a moment like that, it reinforces what you know about their heart,” Mr. Bahl said.

Mr. Raleigh and Mr. Bahl had been talking casually about marriage for years when Mr. Raleigh proposed on Christmas Day 2018, on a vacation to Key West, Fla. While Mr. Bahl was watching a “Sex and the City” marathon in bed, Mr. Raleigh presented him with a ring and a card that said, “Will you marry me?” Mr. Bahl was stunned. He thought he was going to be the one to propose. And eventually, he was: After he said yes to Mr. Raleigh’s proposal, he proposed this year on Valentine’s Day.

“To be honest, I was never hell bent on getting married,” Mr. Bahl said. “I was reluctant about the whole heteronormative thing. But David has been planning a wedding since he was a child, with doves flying out of rainbows and monarch butterflies.”

The wedding that was held on Oct. 30 at the Cutting Room in Manhattan, after a Covid cancellation in 2020, had stars instead. Billy Porter, a longtime friend of the couple, was among the performers. Another longtime friend, Rhonda Ross-Kendrick, the daughter of Diana Ross and Berry Gordy and a Universal Life Church minister, officiated and performed.

The evening was arranged awards-show style: 175 guests in black-tie attire snaked down 32nd Street before showing their vaccine cards or a negative Covid test to be admitted. Once inside, they mingled over cocktails and oysters before being shown to their tables for the ceremony. Onstage, the Mostly Modern String Quartet played for guests before Mr. Raleigh and Mr. Bahl, in matching white jackets, entered to a roar of applause.

They held hands before the stage as Ms. Ross-Kendrick wished them a lifetime of perfect love. In handwritten vows, Mr. Raleigh told Mr. Bahl his heart still skips a beat when he walks into the room. Before he was finished, a collective laugh erupted at the line, “I would say I want to grow old with you, but I’ve already done that.” Mr. Bahl was already choked up when it was his turn. “I’m so excited to spend the rest of my life with you,” he said. “We’re not yet halfway there.”

Just before Mr. Porter took the stage to perform the John Bucchino song “Grateful,” Ms. Ross-Kendrick, a singer-songwriter, actress and public speaker, told the packed room their relationship was now legal and binding. “I rejoice to recognize you as husband and husband,” she said, to wolf whistles and many wiped tears.

Truly The theme of the wedding, “truly blessed and duly grateful,” was printed on accents throughout the club, including a giant banner at the entryway where guests stopped to pose for photos.

Right at Home After the ceremony, guests were served dinner at their tables. Entrees included filet of Scottish salmon and prime rib. The couple chose the Cutting Room for sentimental reasons: Mr. Raleigh has been a frequent performer there.

Shared Spotlight During a reception that continued past midnight, Mr. Raleigh and Mr. Bahl performed a duet of Beth Nielsen Chapman’s “All I Have.” “That’s our song,” Mr. Bahl said.

Denial of responsibility! TechiLive.in is an automatic aggregator around the global media. All the content are available free on Internet. We have just arranged it in one platform for educational purpose only. In each content, the hyperlink to the primary source is specified. All trademarks belong to their rightful owners, all materials to their authors. If you are the owner of the content and do not want us to publish your materials on our website, please contact us by email – [email protected]. The content will be deleted within 24 hours.
cablifelifestyle newslifestyle updatenews updateRidesharedtechi live
Share