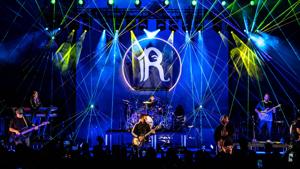 Rebelution bassist Marley D Williams‘ reggae destiny was set before he made his debut from the womb.

The Northern California native’s “hippy” parents named him after the Jamaican reggae legend Bob Marley and exposed him to the genre, playing reggae music around the family’s off-the-grid house — they had no electricity or running water in their home, which his father built on a large swath of forest land.

His parents also took him to the annual Reggae on the River Festival in nearby Humboldt County, where he would see California reggae bands alongside bands from Jamaica.

Thursday’s show will be the band’s biggest in Tucson, where they have played nine or 10 times since they started touring in 2007-08.

Williams and his band mates — Eric Rachmany, Rory Carey and Wesley Finley — met while attending UC Santa Barbara in Isla Vista, California, in 2004 and played backyard gigs while attending school. Three years later, with their degrees in hand, they started recording and touring, joining a handful of SoCal reggae bands including Slightly Stoopid, the Expendables, Iration and the B Foundation.

Unlike their Jamaican counterparts, American reggae bands fused more of a rock and surf edge into their groove, creating what Williams calls happy music.

“We are the music that is your friend that you can rely on. It’s not flashy; you know what you are getting and you feel at home,” he explained during a phone interview early this month.

“It’s the genre of music right now, at least in our country, where it kind of checks the boxes for the sound of the beach, the backyard party, the river day, the boat day, doing errands around the house, mellow kickback having friends over,” he said. “And I’m really happy about that.”

Rebelution has hosted its Good Vibes Summer Tour for close to a decade, bringing along opening acts that represented reggae’s past and its future. The legendary Steel Pulse roots reggae band from England is on the lineup with newcomer DENM.

Williams said he grew up listening to the British Jamaican Steel Pulse, which has been around since 1975.

“They’re legends. Sometimes I feel a little funny when we’re on tour. I grew up with my mom and dad raising me on Steel Pulse and bands like that,” he confessed.

Rebelution is touring on its pandemic-era album “In the Moment,” which was recorded remotely. Frontman Rachmany had a creative burst “and out of nowhere he went nuts and had this material” that they added to when he shared it, Williams said. The theme was appreciating the moment we are in and not dwelling on the negative.

Songs on the album including “2020 Vision,” “Satisfied” and “All or Nothing” are introspective glimpses of the band’s pandemic life while “Old School Feelings” and “Initials” are reminders of happy days gone by.

“You need to have music with a good message and a good groove that you can relate to as a person,” Williams said.

“(The tour) has been so much fun. It’s what we love to do, make people happy and stoked to come to a place where they can get away from the daily grind and all the headlines and everything. Keep it simple and sing, dance and enjoy a night together.”

Also at the AVA this weekend, rapper Ice-T brings his “Something From Nothing” tour with Too Short and Bone Thugs-N-Harmony at 7:30 p.m. Saturday, Aug. 20. Tickets are $35 to $75 through casinodelsol.com.

Receive the latest in local entertainment news in your inbox weekly!

Denial of responsibility! TechiLive.in is an automatic aggregator around the global media. All the content are available free on Internet. We have just arranged it in one platform for educational purpose only. In each content, the hyperlink to the primary source is specified. All trademarks belong to their rightful owners, all materials to their authors. If you are the owner of the content and do not want us to publish your materials on our website, please contact us by email – [email protected]. The content will be deleted within 24 hours.
ava at casino del solbandbringingconcertsdenmEntertainmententertainment newsEntertainment update
Share