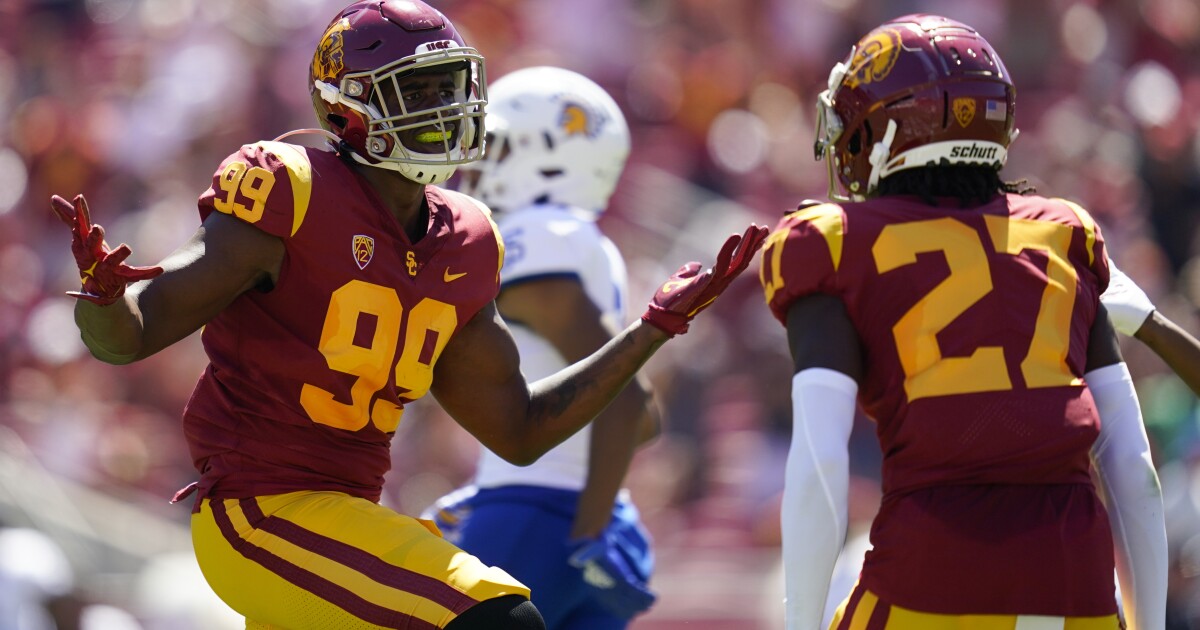 Three things to know about USC vs. Stanford

About USC: There are still plenty of questions to answer on offense, from pass protection to receiver depth to red-zone play calling. But it’s been a while since USC’s defense made a statement like it did during last week’s 30-7 win over San Jose State. Can USC maintain that level of defensive dominance? It’s far too early to tell, but early returns are promising. USC may need its defense to be extraordinary in order to alleviate the pressure on quarterback Kedon Slovis and the offense this season. For this week, a healthy dose of the run game against a Stanford defense that was run over last week by Kansas State should do the trick.

About Stanford: It’s never ideal to make a quarterback change after one week, but that’s where Stanford and coach David Shaw find themselves. Senior Jack West got the start last week, but he was clearly outplayed by sophomore Tanner McKee, who immediately unseated him. Now McKee, who was a top recruit in 2018 before leaving on a Mormon mission, will make his first start against a USC defense that is playing at a high level. Expect the Cardinal to try to establish the run early after its rushing attack was stopped dead — earning just 39 total yards — in the opener.

Three things you need to know:

1. Shaw is widely recognized as one of college football’s top coaches — and a perennial candidate to be an NFL head coach — but it’s been tough sledding at Stanford since the end of the 2018 season. After averaging over 10 wins per season over Shaw’s first eight seasons, Stanford is 8-11 in its last 19 games. During the same stretch, Clay Helton is 13-6 at USC. But while Helton may have the recent advantage, he’s got a ways to go to match Shaw’s three Pac-12 championships.

2. After missing the opener while in COVID-19 health and safety protocols, defensive captain Isaiah Pola-Mao should be back on the field this week. The safety’s return should only help a defense that looked pretty stout without him last week. It’s unclear what Pola-Mao’s presence will mean for freshman safety Calen Bullock, who stepped in last week with a dynamic debut. All three safeties, including Chase Williams, could see the field often, perhaps with Pola-Mao blitzing off the edge and Bullock covering the deep middle of the field.

3. Two years ago, Slovis stepped in against Stanford as an unheralded true freshman and announced his arrival as USC’s next starting quarterback with a 377-yard, three-touchdown eruption. Slovis still hasn’t matched the 85% completion rate he managed that night against the Cardinal, but don’t be surprised if he airs it out early on Saturday — especially with deep threat Gary Bryant Jr. back in the lineup.

Denial of responsibility! TechiLive.in is an automatic aggregator around the global media. All the content are available free on Internet. We have just arranged it in one platform for educational purpose only. In each content, the hyperlink to the primary source is specified. All trademarks belong to their rightful owners, all materials to their authors. If you are the owner of the content and do not want us to publish your materials on our website, please contact us by email – [email protected]. The content will be deleted within 24 hours.
news updatesports newssports updateStanfordtechi liveUSC
Share

Kids With Smartwatches Are the New Classroom Nuisance

What’s the Impact of the Apple App Store Court Ruling?