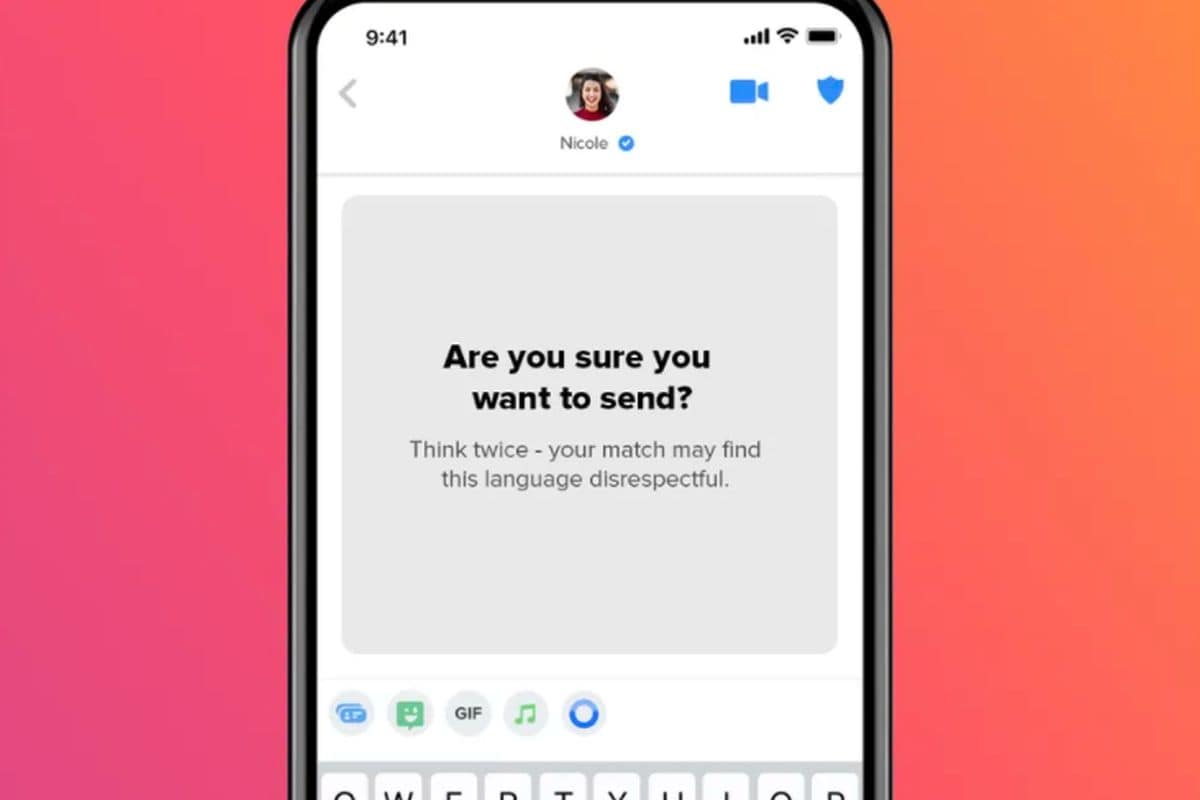 Tinder’s latest safety feature “Are You Sure?” prompts users to stop and think twice before sending a potentially offensive message. The feature aims to reduce harassment on the online dating platform by using artificial intelligence (AI) to detect harmful language and intervenes to prevent an instance of abuse. Tinder had earlier introduced “Does This Bother You?” feature to provide support to users when offensive language was detected in received messages. Tech companies including Instagram and YouTube have employed similar technology to warn users before posting offensive comments.

The “Are You Sure?” prompt intervenes to warn a sender that the message may be offensive and asks them to pause before hitting the send button. The California-based company explained in its blog that the AI is trained on what users have reported in the past. The company also reported that members who saw the prompt were less likely to be reported for inappropriate messages over the next month.

“The early results from these features show us that intervention done the right way can be really meaningful in changing behaviour,” said Tracey Breeden, Head of Safety and Social Advocacy for Match Group.

Tinder had introduced the “Does This Bother You?” feature that provided support to users when offensive language was detected in the messages they had received.

In March, Instagram confirmed that it is allowing users to block or restrict multiple accounts from the comments section of their posts as a part of a limited test. The social media company said that it was a part of its broader efforts to help fight bullying and harassment on the platform.

In December 2020, YouTube introduced new features to its platform to support diverse communities and encourage respectful interactions. YouTube will also test a new filter in YouTube Studio for potentially inappropriate and hurtful comments that have been automatically held for review, so that channel owners won’t have to look at those comments if they don’t want to.


Jasmin Jose is a sub-editor at Gadgets 360. She has directed investigative documentaries, PSAs, and video features covering arts, culture, science, and general news in the past.  She believes in the power of the Internet and is constantly looking out for the next new technology that is going to transform life on earth. When not doing things news, she can be found reading fiction, physics or philosophy, plucking berries, or talking cinema. Write to her at [email protected] or get in
…More
Loading...

Loading...
Denial of responsibility! TechiLive.in is an automatic aggregator around the global media. All the content are available free on Internet. We have just arranged it in one platform for educational purpose only. In each content, the hyperlink to the primary source is specified. All trademarks belong to their rightful owners, all materials to their authors. If you are the owner of the content and do not want us to publish your materials on our website, please contact us by email – [email protected]. The content will be deleted within 24 hours.
AIgadget updateHurtfulInstagrammatchmessagesPauseprompt
0
Share

Oil jumps on weather concerns in Gulf of Mexico By Reuters