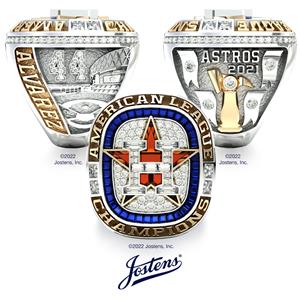 Houston, TX, April 18, 2022 (GLOBE NEWSWIRE) — In partnership with Jostens, the Houston Astros players and coaches received their rings on-field at Minute Maid Park in an exciting ceremony prior to their 2022 season home opener.

“Jostens has been proud to be the trusted partner of the Houston Astros, it is a special relationship between our organizations and it is an honor to once again celebrate their success,” said Chris Poitras VP & COO of Jostens Professional Sports Division. “The Astros 2021 American League Championship Ring features beautiful custom-cut stones that bring their logo to life and beautifully tells the story of their championship season.”

“No other company celebrates champions quite like Jostens,” said Anita Sehgal, SVP of Marketing and Communications of the Houston Astros. “They have been our partner since our World Series victory back in 2017. Each ring they have helped us create has been unique to our organization, the season and our incredible fans. We are excited to unveil the 2021 American League Championship Ring and share this chapter of Astros history.”

The ring top proudly displays the iconic Astros “H” made from 15 intricately set custom-cut diamonds, symbolic of the Astros 15 franchise postseason appearances. The logo is completed by a star set with custom-cut genuine orange sapphires surrounded by 40 round pavé-set diamonds with a halo of 42 genuine blue sapphires. Framing the logo in contrasting yellow gold, which signifies the team’s 2021 American League Team Gold Glove award, are the words AMERICAN LEAGUE CHAMPIONS. These words are accented with four total princess-cut diamonds, two on each side of the ring face. These four diamonds represent the Houston Astros four league pennants won throughout franchise history. Accenting the perimeter of the ring top are 60 diamonds paying tribute to the Astros 60th season in MLB.

The left side of the ring features the player’s names spelled out vertically in eye-catching yellow gold. To the right of their name, the players’ jersey numbers will be proudly showcased in diamonds. Completing the left side of the ring, the home of the Astros, Minute Maid Park, is brought to life in intricate detail, representing Astros fans, the best fans in Major League Baseball. In 2021, Astros fans were welcomed back home to Minute Maid Park after a 2020 season played without fans due to the COVID-19 pandemic and they were a key factor to the team’s success, 2021 American League Pennant and World Series run.

The right side of the ring is accented with the championship year date of 2021, which is highlighted by the Astros wordmark logo. The American League Trophy is created in yellow gold, creating a striking contrast from the background. A single diamond is set in the trophy, symbolizing the most recent American League Championship won by the Astros. Four banners are set on either side of the Trophy, each set with a single diamond representing the four trips to the World Series. These five total diamonds are representative of the Astros extraordinary, current run of five consecutive ALCS appearances.

The interior of the ring continues the storytelling by featuring the Astros logo accented by two stars on either side, along with the championship year dates, an homage to their four league pennants. The palm side of the ring displays the team’s 2021 rally cry “FOR THE H,” with the “H” being the Astros logo.

Jostens also partnered with the Houston Astros in producing an American League Championship jewelry collection allowing their entire fan community to celebrate the championship. Astros fans can capture their piece of history and commemorate this exciting moment in franchise history through a selection of customized jewelry and keepsakes. All pieces in this collection are inspired by the Astros official Championship Ring and are available now for a limited time by ordering online at: www.jostens.com/astros.

Jostens is a trusted partner in the academic and achievement channel, providing products, programs and services that help its customers celebrate moments that matter. The company’s products include yearbooks, publications, jewelry and consumer goods that serve the K-12 educational, college and professional sports segments. Founded in 1897 and based in Minneapolis, Minn., Jostens can be found online at www.jostens.com.

Denial of responsibility! TechiLive.in is an automatic aggregator around the global media. All the content are available free on Internet. We have just arranged it in one platform for educational purpose only. In each content, the hyperlink to the primary source is specified. All trademarks belong to their rightful owners, all materials to their authors. If you are the owner of the content and do not want us to publish your materials on our website, please contact us by email – [email protected]. The content will be deleted within 24 hours.
#AmericanLeague#HoustonAstrosamericanAstrosChampionshipcommemorateCraftHouston
Share