Notice: amp_is_available was called incorrectly. `amp_is_available()` (or `amp_is_request()`, formerly `is_amp_endpoint()`) was called too early and so it will not work properly. WordPress is currently doing the `pre_get_posts` hook. Calling this function before the `wp` action means it will not have access to `WP_Query` and the queried object to determine if it is an AMP response, thus neither the `amp_skip_post()` filter nor the AMP enabled toggle will be considered. It appears the theme with slug `publisher` is responsible; please contact the author. Please see Debugging in WordPress for more information. (This message was added in version 2.0.0.) in /home/runcloud/webapps/techilive/wp-includes/functions.php on line 5313
 To keep job, Rams' Johnny Hekker knows his punting must be on the money - TechiLive.in 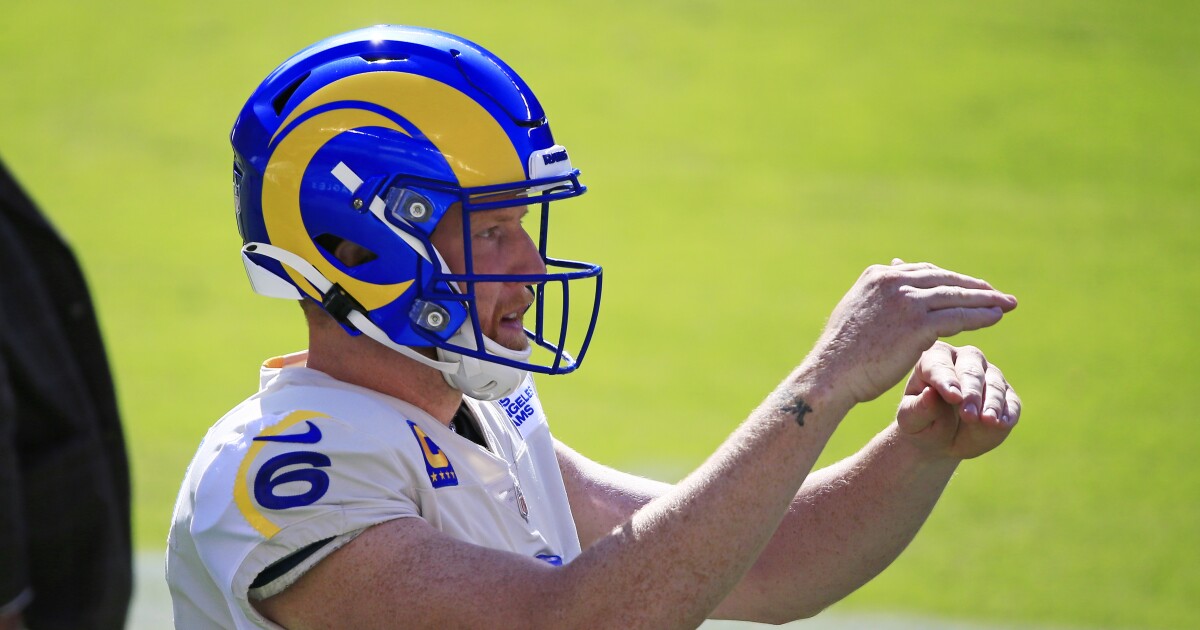 To keep job, Rams’ Johnny Hekker knows his punting must be on the money

He is the longest-tenured Rams player.

Punter Johnny Hekker started his career with the team as an undrafted free agent in 2012. The four-time Pro Bowl selection is the NFL’s highest-paid player at his position, carrying a salary-cap number of $4.9 million, according to overthecap.com.

And for the first time in years, Hekker is competing for his job.

But Thursday, during a videoconference with reporters, Hekker, 31, said words spoken in news conferences were just that: words. He is approaching every organized-team activity workout on the field and in the weight room as a competition.

“When push comes to shove, they have to make the best decisions for this roster,” Hekker said, “and there’s no running around the financial aspect of it. So, you’ve got to do what you’ve got to do to put together the best roster that you can.

“And Corey is wildly talented. And so I think for me, to for a second not think of this as a competition and not prepare myself every day like it is a competition would be doing myself and this team a disservice.”

Bojorquez, 24, played at Lakewood Mayfair High, Cerritos College and New Mexico before signing with the New England Patriots in 2018. He spent the last three seasons with the Buffalo Bills, and last season averaged a career-best 50.8 yards per punt.

Brandon Wright is another punter on the offseason roster. New special teams coordinator Joe DeCamillis is evaluating seven specialists, including kickers Matt Gay and Austin MacGinnis and long-snappers Matthew Orzech and Steven Wirtel. The large number of specialists reflects how NFL teams stocked up with players on the practice squad because of the COVID-19 pandemic.

“I’m definitely starting to feel like the old guy,” Hekker said, “but I’m still having a ton of fun every day, showing up with enthusiasm and giving it all I got.”

Hekker acknowledged that his performance last season was below standard.

“I definitely did not perform to the best of my abilities,” he said. “There were a few games that I really, I don’t know, just kind of got just maybe ahead of myself mentally. … There were definitely some kicks out there that I would have liked to have seen go better for the team. … When I don’t put our team in good positions that’s the stuff that really bugs me.

“So, I think them going out and signing Corey is a great move. Corey is a great punter. … A guy that has one of the strongest legs I’ve ever seen. … Him and Brandon are both guys that are sound technically and they’re going to help keep me on my Ps and Qs.”

Gay signed with the Rams last October after McVay could no longer tolerate misses by rookie Samuel Sloman and moved on from veteran Kai Forbath. Gay made 14 of 16 field-goal attempts.

Gay said that Hekker, the holder for field-goal and extra-point attempts, was correct to approach every workout as a competition.

“When people start hitting balls and the juices get flowing, that competitive side comes out,” Gay said. “Both of them, Johnny and Corey, have been hitting it really good. Super consistent. … They’re both great punters, and it’s been fun to watch both of them just kind of hit the ball and goin’ at it.”

Hekker will continue to do so through next week’s minicamp and summer training camp as the Rams prepare for their Sept. 12 opener against the Chicago Bears at SoFi Stadium.

“The second that you take something for granted of something for certainty in this league is the day you get surprised,” he said. “So I’m just enjoying every day and just doing my best to prepare and help this team however I can.”

Loading...
Denial of responsibility! TechiLive.in is an automatic aggregator around the global media. All the content are available free on Internet. We have just arranged it in one platform for educational purpose only. In each content, the hyperlink to the primary source is specified. All trademarks belong to their rightful owners, all materials to their authors. If you are the owner of the content and do not want us to publish your materials on our website, please contact us by email – admin@techilive.in. The content will be deleted within 24 hours.
HekkerJobJohnnymoneynews updatepuntingRamssports news
0
Share

Free Webinar | June 9: How To Assess if Your Business Has a Strong Foundation