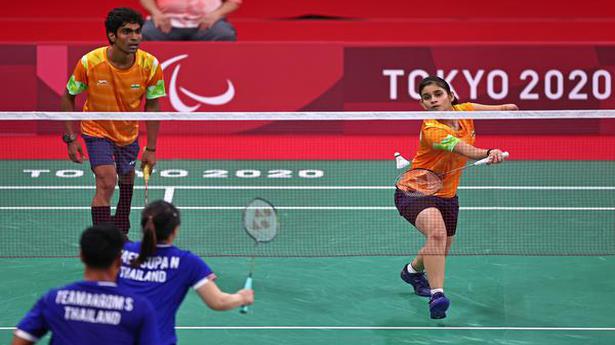 Pramod Bhagat, who had qualified for the men’s singles SL3 event on September 2, and Palak Kohli beat Thailand’s Siripong teamarrom and Nipada Saensupa in a 29-minute clash to finish second in group B.

India’s Pramod Bhagat and his partner Palak Kohli qualified for the mixed doubles semifinals, while three singles players, including Noida District Magistrate Suhas Yathiraj, also made the last-four stage to continue a rampaging run at the Paralympics badminton competition here on September 3.

Bhagat, who had qualified for the men’s singles SL3 event on September 2, and Kohli beat Thailand’s Siripong teamarrom and Nipada Saensupa 21-15 21-19 in a 29-minute clash to finish second in group B.

In men’s singles, Suhas, Tarun Dhillon and Manoj Sarkar also made it to the semifinals on a fruitful day for India.

With two wins out of three matches so far in their respective groups, both Suhas and Tarun have qualified for semifinals and might face-off in the knockout stage.

Suhas has an impairment in one of his ankles, while Tarun has restricted knee movement following a severe injury that he suffered at the age of eight.

In SL3 class, Manoj secured a 21-16 21-9 victory over Ukraine’s Oleksandr Chyrkov to make it to the knockout stage after finishing at the second spot in group A behind world no.1 Bhagat.

The 31-year-old, who had contracted polio at one, suffered a loss to Bhagat in his opening match.

While Suhas hardly broke any sweat during his contest, Tarun had to toil hard to edge out Hwan, who recovered from an opening game reversal to grab the second game.

Loading...
Denial of responsibility! TechiLive.in is an automatic aggregator around the global media. All the content are available free on Internet. We have just arranged it in one platform for educational purpose only. In each content, the hyperlink to the primary source is specified. All trademarks belong to their rightful owners, all materials to their authors. If you are the owner of the content and do not want us to publish your materials on our website, please contact us by email – [email protected]. The content will be deleted within 24 hours.
BadmintonBhagatBhagatKohliEntersKohliManojmixed doublesnews update
Share

2 doses of Covid-19 vaccine reduce chances of long Covid-19 by half, finds study